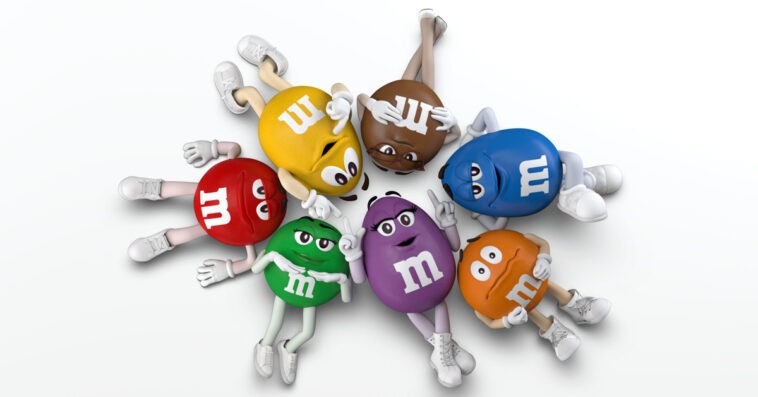 Get to know M&M’s Purple

In a press release announcing Purple’s permanent addition to the crew, the chocolate brand said their newest member is designed to represent acceptance and inclusivity. Known for her earnest self-expression, Purple is described as charming and quirky in nature, thanks to her keen self-awareness, authenticity, and confidence. Purple joins the legendary cast of M&M’s characters, including Red, Yellow, Orange, Brown, Blue, and Green, who were all given a refresh with updated looks and more nuanced personalities last January.

“Mars is thrilled to debut the newest member of the M&M’S cast of characters to the world. There is so much about our new spokescandy that people can relate to and appreciate, including her willingness to embrace her true self. Our new character reminds us to celebrate what makes us unique,” said Jane Hwang, Global Vice President at Mars Wrigley, in a statement. “Our purpose story is just getting started and the introduction of our newest M&M’S spokescandy is the next chapter, as the brand continues to delight fans with fun in a way only M&M’S can.”

Aside from her color, Purple’s other unique physical characteristic is her pair of laced-up boots. Prior to the M&M’s character makeover earlier this year, Green was rocking a pair of boots. When her footwear was changed to a pair of regular-looking sneakers, there was an overwhelming reaction to her new kicks, with several fans demanding to restore Green’s previous look.

Speaking to CNN Business, Hwang made it clear that the brand didn’t take the fan reaction to Green into account when designing Purple. “[Purple] had nothing to do … with the commentaries we saw about Green,” she said, before pointing out that “Purple has been in the works for a very long time, for years.”

Purple made her debut with a new song titled I’m Just Gonna Be Me. The track, which comes with an accompanying music video, is now available on all major music streaming platforms, including Spotify and Apple Music.

Featuring the extraordinary talents of saxophonist Grace Kelly, dance and choreography masters Devin Santiago and Colo Cag, celebrated opera singer Anthony Roth Costanzo, and special appearances by the rest of the M&M’S crew, the music video opens with Purple sitting in her dressing room preparing to perform, asking herself if she’s capable of her new role as the newest M&M’s spokescandy. After mustering her courage to step into the stage, Purple doesn’t even realize that she’s already belting out her new song to the world.

For every stream, a $1 donation (up to $500,00 dollars) will be made to Sing for Hope, a nonprofit that harnesses the power of the arts to bring hope, connection, and purpose to millions of people around the world through music. The donation campaign is part of the M&M’S FUNd, a global initiative intended to track the brand’s impact on its mission to increase a sense of belonging for ten million people by 2025.

Is a purple M&M coming to bags of Peanut M&M’s?

Though Purple will appear in stores, on the M&M’S website, and on some limited-edition packaging, there are currently no plans to add a purple peanut M&M to regular bags of Peanut M&M’s. Customers, however, can buy purple M&M’S online, an option that has been available for quite some time. Planning a party? Punch it up with the Purple Peanut M&M’s. Let M&M’S decorate the table with serving dishes featuring these unique solid color Purple Peanut M&M's by themselves or mixed with your choice of nine other beautiful shades.

Though Hwang said that they have “heard for a long time that purple is certainly a consumer favorite,” she said that M&M’s is currently focusing on the characters, rather than the actual edible candies.