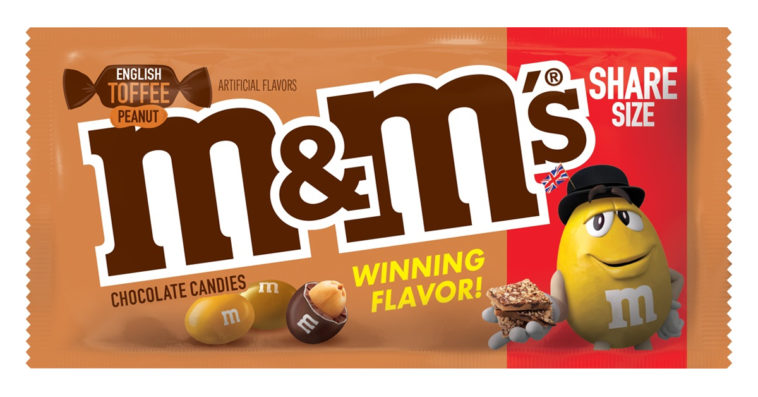 English Toffee Peanut is officially joining the M&M’s line-up this month, after being declared as the winner of the candy brand’s 2019 Flavor Vote campaign.

For those who haven’t tried the internationally-inspired peanut variety yet, M&M’s says that the quintessential flavor “tastes as elegant as a trip to Great Britain itself.” M&M’s English Toffee Peanut features a delicious combination of sweet toffee and savory peanut, covered in milk chocolate and wrapped in the brand’s signature colorful crispy shell.

In addition to officially joining the M&M’s line-up this August, the winning flavor will also continue to be sold at U.S. stores for an 18-month period while supplies last. It is available on mms.com and on shelves at retailers nationwide in Share Size (2.83 oz.) and Sharing Size Stand Up Pouch (8 oz.).

M&M’s English Toffee Peanut was introduced to the market earlier this year along with two other internationally-inspired M&M’S Peanut flavors: Mexican Jalapeño Peanut and Thai Coconut Peanut. The candy brand asked fans across the U.S. to take a “mini vacation with their mouths” by trying each peanut flavor and voting for their favorite to remain on store shelves.

“We love inviting our fans to partake in the flavor innovation process and influence the M&M’s products they see on shelves,” said Allison Miazga-Bedrick, brand director at M&M’s. “We were thrilled to see so many of our passionate fans engage in the campaign and cast their votes, with English Toffee Peanut as the overwhelming fan-favorite!”

In 2018, M&M’s let fans vote on a new Crunchy flavor, and among the three contenders — Crunchy Espresso, Crunchy Raspberry, and Crunchy Mint — it was the Crunchy Mint M&M’s that ended up winning the permanent spot.