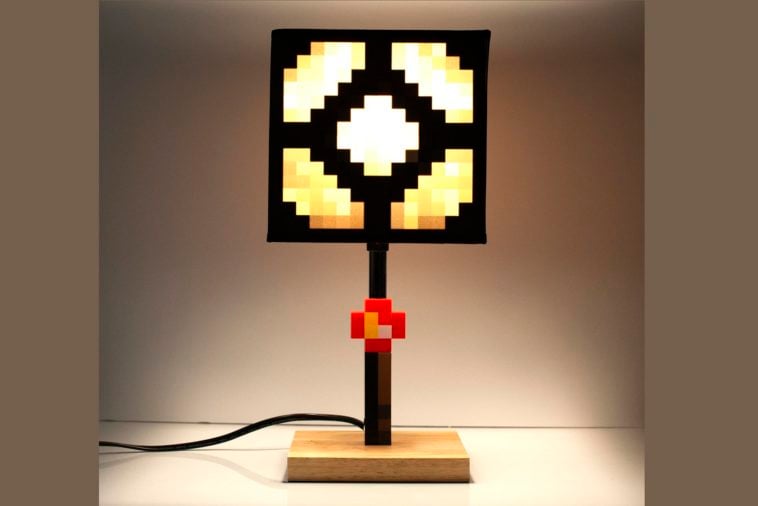 Since first hitting video game consoles back in 2011, Minecraft has become one of the most all-conquering cultural phenomenons of the last decade. The series has since gone on to spawn multiple spinoffs and generated billions of dollars in revenue after selling over 200 million copies. There’s even been a feature film in the works since 2014, which was originally set to be directed by It’s Always Sunny in Philadelphia creator Rob McElhenney, although he eventually dropped out and was replaced by Nick and Norah’s Infinite Playlist director Peter Sollett.

After acquiring the IP for $2.5 billion six years ago, Microsoft is intent to keep monetizing one of their most marketable assets, and Tonyk has now announced an official home goods collection of Minecraft merchandise that will directly appeal to both old and new fans alike.

The line includes LED lamps, storage bins and even rugs. The Minecraft Diamond Sword Desk Lamp ($49) uses energy-efficient light to keep the fun alive with a Glowstone option, while a 3-foot Minercraft Creeper Rug ($49)  offers a much quirkier centerpiece for a room than a standard shag or wool number, although you might also be interested in the 12-inch Minecraft Creeper LED Motion Lamp ($39.99).

Everything in the latest collection is priced between $24.99 and $49.99, with the Storage Bins showcasing multiple different blocks from the game’s iconic back catalog including the Creeper, TNT and the Grassy Block. If you’re of the opinion that your personal space is somewhat lacking in Minecraft paraphernalia then Tonyk’s collection is well worth checking out and contains merchandise that will appeal to fans of all ages.