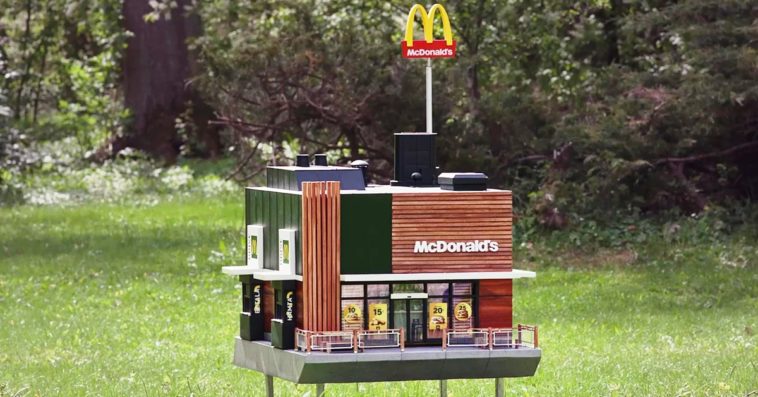 The world’s smallest McDonald’s has just opened but it doesn’t serve burgers, fries, McFlurry, or any snacks available from a regular Mickey D’s. All it’s got is honey — and that’s because it’s actually a beehive.

Conceptualized by marketing firm Nord DDB, this mini version of a McDonald’s restaurant is called the McHive. Built by set designer Nicklas Nilsson, it features a detailed exterior that includes posters in the windows; an outdoor patio with tables, chairs, and umbrellas; a miniature drive-thru, and those iconic, towering Golden Arches. Its interior, on the other hand, is actually a bee box with rows of honeycombs where bees can store their honey and eggs.

The McHive was a tribute to a Swedish franchisee that put five beehives atop of her five restaurants to help counter the alarming decline of the bee population.

“It’s an issue that affects us all,” Petter Dixelius, senior copywriter at Nord DDB, told Muse of the diminishing number of bees, which are responsible for pollination one-third of the Earth’s food crops. “McDonald’s Sweden’s brand statement is, ‘Big enough to make a difference.’ In the latest campaign, we highlight small local initiatives that McDonald’s is scaling up. One of those initiatives is from franchisee Christina Richter, who has beehives on her restaurants’ rooftops.”

When asked what made them decide to build a mini replica of a McDonald’s eatery, Dixelius replied: “Could there be a cuter way to illustrate such an important issue?”

“Jokes aside, we think everyone is happy that such a big brand as McDonald’s would recognize and act on this important issue,” Dixelius added.

Following Richter’s footsteps, more and more franchisees in Sweden have started to put beehives atop their restaurants. Nord DDB said that some even promised to replace the grass around their restaurants with flowers and plants that are important for the wellbeing of wild bees.

“We have a lot of really devoted franchisees who contribute to our sustainability work, and it feels good that we can use our size to amplify such a great idea as beehives on the rooftops,” marketing director for McDonald’s Sweden, Christoffer Rönnblad, said in a statement.

In honor of World Bee Day on May 20th, the McHive was sold at an auction for $10,000, with all proceeds going towards the Ronald McDonald House charities.