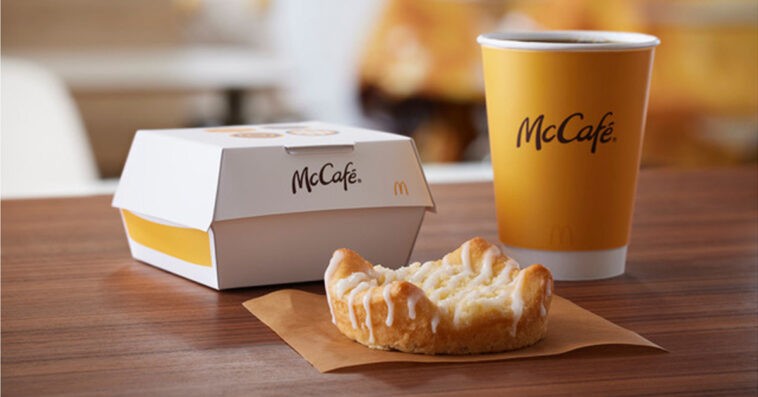 The Cheese Danish is making a comeback at McDonald’s after more than three decades of absence.

Tapping into nostalgia to excite customers, the fast-food giant announced today that it is adding the Cheese Danish to the McCafé Bakery menu in the United States starting September 14th for a limited time.

What is McDonald’s Cheese Danish?

McDonald’s Cheese Danish is a flakey pastry with a sweet cream cheese filling and topped with a buttery streusel and light vanilla drizzle. Perfect to pair with coffee, the Cheese Danish is described as a “fresh take” on a pastry that the chain first offered back in the ‘80s.

Like McDonald’s Apple Fritter, Blueberry Muffin, Cinnamon Roll, and other McCafé Bakery items, the Cheese Danish will be available all day for in-restaurant, drive-thru, and delivery purchases.

The Cheese Danish is a surprising addition to the McDonald’s menu this fall, as the chain only introduced pumpkin-, maple-, or pecan-flavored items in recent years during the fall season.

McCafé Bakery is an assortment of baked goods launched in 2020 to help invigorate McDonald’s once-sagging breakfast sales. Introducing new items to its breakfast lineup has helped the chain turn around sales during the crucial part of the day, especially as its rival restaurants are constantly beefing up their morning offerings.

Fast-forward to 2022’s most recent earnings call, McDonald’s CEO Chris Kempczinski said that breakfast was the company’s “strongest performing daypart.” “It’s a change. If you remember, a few years ago, I think there were a bunch of questions about breakfast,” Kempczinski recalled at the time.

While McCafé Bakery sales cannot be determined from McDonald’s quarterly financial result reports, the chain reportedly made $5.72 billion in the second quarter of 2022, according to FOX Business.

“Over the last few years, McDonald’s has proven itself the champion of recognizing and cashing in on current consumer trends,” wrote Carmen Bryan, a consumer analyst at GlobalData, in a note Tuesday (via CNN Business). “The company has consistently reinvented its menu throughout the pandemic and beyond, which has helped it to retain relevance and customer interest.”