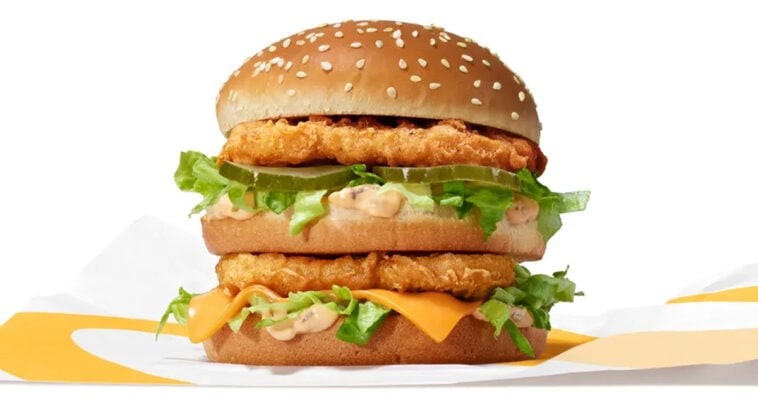 After a successful limited-time run in the United Kingdom, McDonald’s Chicken Big Mac is now on its way to the United States.

What is Chicken Big Mac?

Chicken Big Mac is a poultry version of McDonald’s iconic Big Mac. Instead of beef patties, the new menu item is made with two fried chicken patties.

“We’re always looking to give our fans more ways to enjoy the classic menu items they know and love,” McDonald’s said in a statement. “Made with two crispy tempura chicken patties, our iconic Big Mac sauce, and topped off with pickles, shredded lettuce, and American cheese, this sandwich (Chicken Big Mac] brings some of our fans’ favorite flavors together for the perfect bite.”

When and where will the Chicken Big Mac be available in the U.S.?

Starting later this August, the Chicken Big Mac will be available for a limited time at select McDonald’s restaurants in Miami, Florida. While the fast-food chain didn’t say if the new sandwich will eventually be available nationwide, it hinted that if the test run in Florida will turn out successful, then the item will likely be added to the menu of all McDonald’s locations across the country.

“While not everything we test makes it on our U.S. menus, we’ll use this time to gather feedback from both customers and restaurant crew as we consider opportunities to offer more delicious options in the future,” McDonald’s said.

After all, McDonald’s CEO Chris Kempczinski revealed during a Q2 earnings call that chicken “continues to be a significant opportunity” and remains a priority for the chain. “We’ve got some great global equities already in our McNuggets and with McChicken, but we also have some equities in McCrispy and McSpicy that we think we’ve got an opportunity to do more with globally,” Kempczinski said at the time.

First introduced in the U.K. earlier this year, McDonald’s Chicken Big Mac was met with so much positive feedback from British customers that it sold out in less than two weeks. The rave about the Chicken Big Mac on the other side of the Atlantic Ocean has made several Americans excited to try the new offering.

Looks good! I would give it a try.

Me: Corporations have way too much power.
Also me: Yo, can I get a medium Chicken Big Mac meal with a Coke? https://t.co/daj1xvpuYV

So I’m hearing McDonalds is testing a Chicken Big Mac??? You have my attention!!! ????

I don’t eat meat. But if I did. @McDonalds this is brilliant. A chicken Big Mac. pic.twitter.com/5xrXZenJya

Danielle Radin, an Emmy-winning journalist for CBS LA, recently tried the Chicken Big Mac in Norway and she was not impressed.

UGH. Even though I really don’t want to, I’m gonna do it…FOR YOU, because I know you’re curious @McDonalds pic.twitter.com/stkh5IP1NO

Update: it was HORRIBLE. It’s like they took two of their chicken nugs, made them bigger and stuffed them in instead of the meat, it was a NIGHTMARE @McDonalds #Norway #ChickenBigMac pic.twitter.com/uT77vGY1vv

It’s unclear though whether the Chicken Big Mac in the U.K. and Norway will be exactly the same as the U.S. version.

While all the previously launched chicken sandwiches are still on McDonald’s USA menu, the arrival of Chicken Big Mac in the country has the potential to get the Chicken Sandwich Wars raging again.