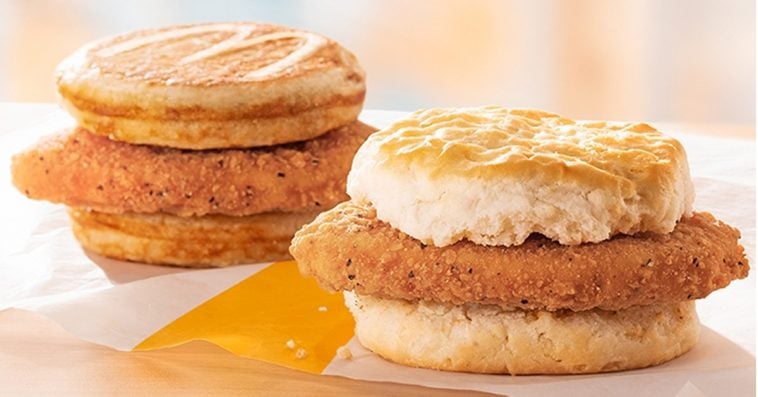 The first one is called Chicken McGriddles, which, based on its name, feature a pair of soft, warm, and sweet maple-flavored griddle cakes, sandwiching a crispy chicken fillet. These tasty McGriddles cakes have no artificial colors, flavors, and preservatives.

Both Chicken McGriddles and McChicken Biscuit are now available for a limited time at participating McDonald’s restaurants across the country. It’s unclear, however, how long they’ll be on the menu.

Both Chicken McGriddles and McChicken Biscuit were first offered at select McDonald’s locations back in July 2019 as part of a limited test market. During the test run, some restaurants sold them as part of a two-for-$3 deal, while others offered the sandwiches individually for as low as $1 each.

While there’s no word on whether McDonald’s has plans to roll out the Blueberry McGriddles nationwide, Carol Martino of McDonald’s culinary innovation team previously described the sandwich as an all-in-one package deal.

“The Blueberry McGriddles breakfast sandwich will satisfy both the sweet and savory senses,” Martino said in a statement last July. “The flavors from the real blueberries balanced with the sweet taste of maple, reminds me of the blueberry pancakes my mother used to make for us growing up. Imagine that combined with your choice of sizzling breakfast sausage or thick-cut bacon nestled under a creamy slice of American cheese and fluffy egg. It’s everything you love about breakfast in one sandwich.”