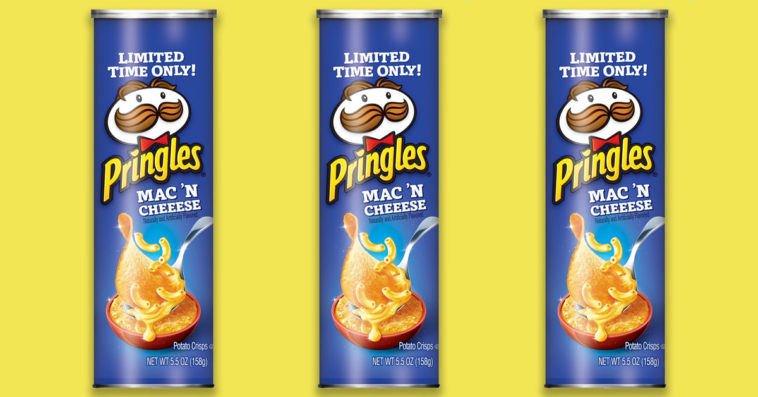 First released as part of the Thanksgiving Dinner Pringles set in 2017, Mac ‘N Cheese Pringles are now back on shelves in their own packaging for a limited time.

The flavor’s comeback was first reported by The Junk Food Aisle on July 11th — just two days before the National Mac & Cheese Day.

Limited Edition Mac ‘N Cheese Pringles! Found at: Dollar General by Beth L. ? Mac ‘N Cheese Pringles we’re part of a test run included in a Thanksgiving Dinner Pringle set back in 2017. I gave them a 3/5 ⭐️⭐️⭐️ then. But more importantly, I hope this means a more public release of some of the other flavors is coming. Looking at you Stuffing Pringles ?? TheJunkFoodAisle.com #thejunkfoodaisle #pringles #macncheese #chips #potatochips #limitededition #limitedtimeonly #macaroniandcheese #dollargeneral

The Mac ‘N Cheese-flavored Pringles are exclusively available at over 15,000 Dollar General locations across the U.S. for a suggested retail price of $1.50 each tub. The cheesy snack will only be available until August while supplies last, so if you are a huge mac and cheese fan, consider stocking up as early as now.

When the Mac ‘N Cheese Pringles were released to stores two years ago, along with turkey-, mashed potato-, cream corn-, green bean casserole, cranberry sauce-, pumpkin pie-, and stuffing-flavored chips, Popsugar editors unanimously agreed that the flavor tastes like real mac and cheese. “Yummers! Tastes like classic homemade cheesy goodness,” wrote one of the taste-testers at the time.

Interestingly, Mac ‘N Cheese isn’t the only Pringles flavor that has returned to the market this month. The Bacon-flavored Pringles, which made its debut about five years ago, is also exclusively available at all Dollar General locations nationwide until August while supplies last.

In addition, Dollar General and Pringles are asking all chip lovers out there to vote for their favorite flavor by tweeting their choice between Mac ‘N Cheese and Bacon to @Pringles with the hashtag #PringlesEntry between July 22nd and August 18th. People who will join poll will earn a chance to win Dollar General gift cards and other Pringles prizes.