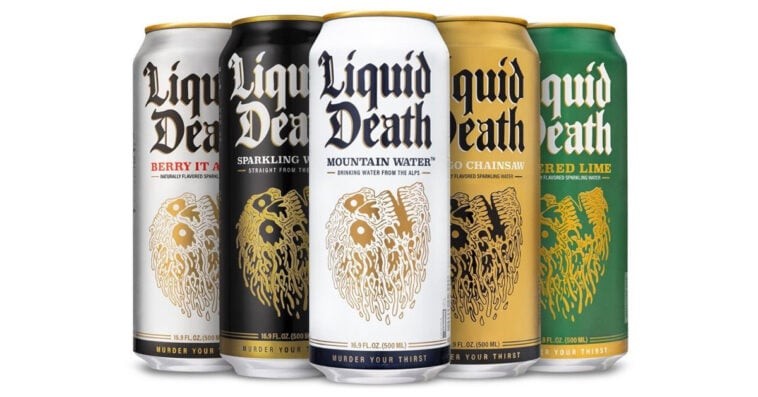 Canned water company Liquid Death is on a path to achieving a $1 billion valuation.

Liquid Death raised $70 million in its Series D funding round last Monday, valuing the brand at $700 million. The latest funding round was led by Science Inc., which helped in the founding of the brand in 2019 and also led its $75 million funding round earlier this year. Other investors include Live Nation Entertainment, comedian Whitney Cummings, and electronic DJ group Swedish House Mafia. According to Crunchbase data, the brand has raised more than $200 million to date.

In a Medium post, Science Inc. co-founder Peter Pham wrote that Liquid Death “may be the fastest growing non-alcoholic beverage of all time.” According to Science Inc.’s research, it took energy drink brand Monster four years and lifestyle fitness drink Celsius 12 years to reach the level of retail success Liquid Death has had in just three. What’s more is that Liquid Death is projecting $130 million in revenue in 2022 (up from $45 million in 2021) and is on pace to double that figure in 2023.

What is Liquid Death?

Liquid Death is a startup that sells water in beer cans. Sold in a 16.9 US fl oz (500 ml) “tallboy” drink can, Liquid Death’s water is sourced from the Austrian Alps and is canned by the Austrian beverage company Starzinger in the Upper Austrian town of Frankenmarkt. According to its website, the company’s purification process preserves 100% of the water’s natural electrolytes that “murders your thirst” ― the brand’s tagline.

During its first three years, the brand was only selling two products: Mountain Water and Sparkling Water. But earlier this year, it debuted three flavored sparkling waters with names matching its edgy branding: Mango Chainsaw, Berry It Alive, and Severed Lime. Pham wrote that the “new flavors are adding 40% in new online revenue and are outselling Aha and Bubly in 7-Eleven.”

Where to buy Liquid Death

The brand’s products are available online at LiquidDeath.com and Amazon, as well as in 60,000 stores across the United States. A year ago, its drinks were only found in 16,000 stores nationwide.

“With this momentum, the company is beginning to lay the groundwork for the IPO path in case it makes sense for the business as well as expand into Europe,” wrote Pham, who also noted that the brand is currently the #1 still water and # 2 sparkling water on Amazon. 100% Mountain Water from the Alps; Water Made By Nature, Not In a Lab; Infinitely Recyclable

Like other upstart water brands, its unique packaging has helped Liquid Death stand out from traditional water brands. As mentioned above, the company packages its water in aluminum cans instead of bottles, which it describes on its website as a more recyclable alternative. Claiming that plastic recycling is “a myth,” the company reportedly donates a portion of its profits to organizations working to reduce plastic pollution.

“Liquid Death is moving people toward healthier and sustainable drinking options, not by preaching to them, but by entertaining them and making them a part of something bigger in culture,” wrote Pham. “People are shifting their consumption habits away from unhealthy sodas, energy drinks, and alcohol and cutting out plastic thanks to Liquid Death while having more fun.”

The creative and comedic campaigns of the brand led by its CEO Mike Cessario have also boosted its sales. Pham wrote that the company knows how to leverage social media, noting that Liquid Death is the #1 most followed beverage brand on TikTok in the U.S., with their content earning more than 21 billion media impressions in the past year.