The Honor View10 offers a ton of value in a well-rounded smartphone package. It will be especially appealing to gamers, thanks to its large vibrant screen and super peppy performance.

New for 2018, The Honor View10 is their latest flagship model, and it’s poised to be a direct competitor to the OnePlus 5T. For $499, the Honor View10 offers nearly identical specs to Huawei’s flagship, the Huawei Mate10 Pro, but at a significantly more affordable price. Read on to see if the Honor View 10 is a viable OnePlus 5T alternative.

We’re not gonna sugar coat this. The Honor View10 is essentially Huawei’s answer to the OnePlus 5T. Honor has been doing a great job producing affordable phones that look and feel a lot more expensive then their price tag.

The design of the Honor View10 is very attractive thanks to its metal body and minimalist bezels. Its blue color in particular really pops, and has become somewhat of a signature design trait for Honor. At the same time, the Honor View10 very much reminds of 2017’s typical flagship smartphone style which took inspiration from the all metal iPhone. 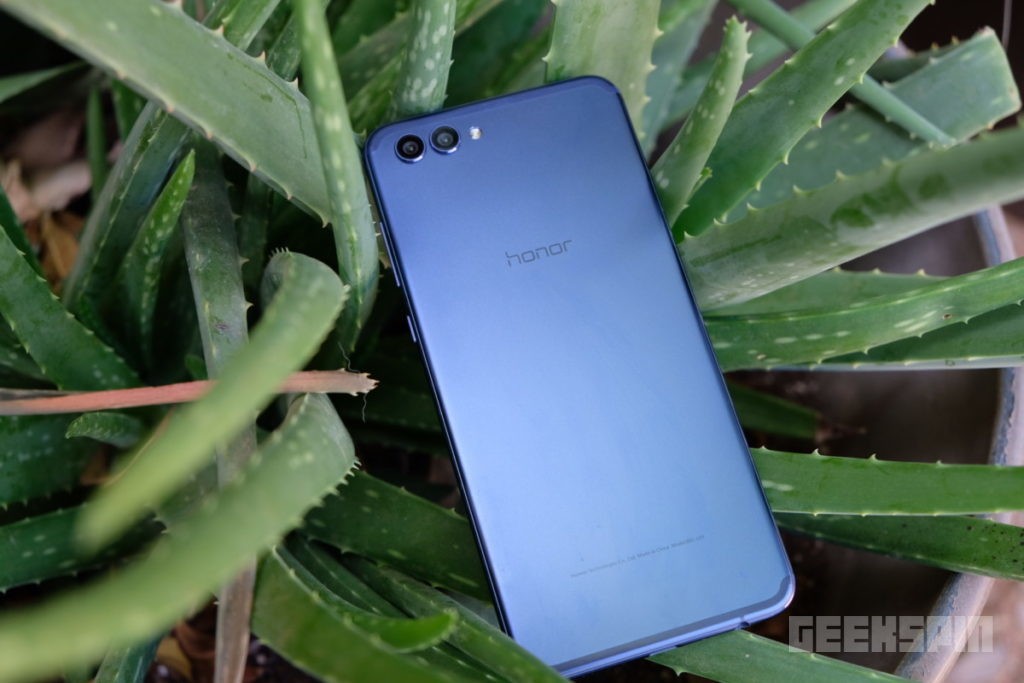 Fortunately, its 18:9 5.99” display really makes it stand out. The display is not an OLED display, but it’s still a very good display with sharp visuals, great brightness levels, and vivid colors with great contrast. Movies and games look brilliant on the View10’s cinematic display.

The display is large and spacious, pushing it into the realm of a phablet. But because of its slim bezels, it’s not unwieldy to hold. Slim bezels are definitely something we’re typically used to seeing being reserved for flagship and pricier phones. And despite its large display, thanks to its slim 7mm thin body, the Honor View10 feels nice to grip and hold in your hand. 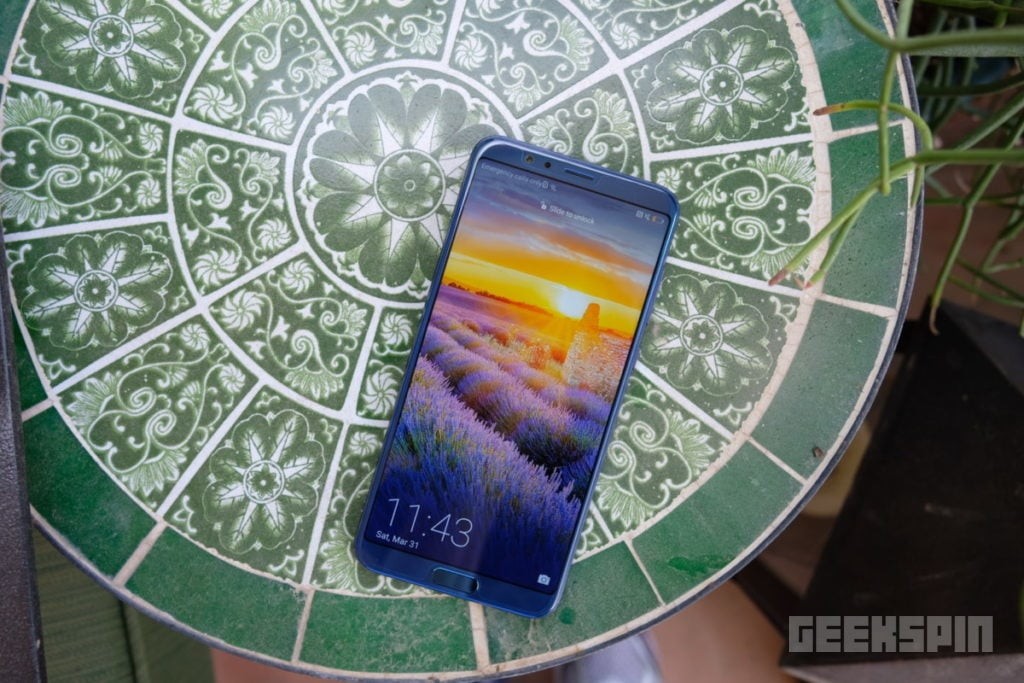 To date, the Honor View10 is the most affordable way to get “AI” on your smartphone. The phone comes running EMUI 8 which is Huawei’s overlay for Android Oreo.  EMUI 8 offers pretty much the same AI features that are found on Huawei’s Mate 10 Pro.

The phone’s AI features learn from your behavior and optimizes the phone accordingly. For instance, the AI helps to optimize your battery life. It also powers the translator.

But in our opinion, the neatest feature where AI comes into play is with the Honor View10’s camera. The camera is able to automatically identify 13 different types of scenes and it will adjust the camera settings automatically.

Taking a photo of a cat? The Honor View10’s camera will automatically optimize the shot for “cat photography”. Other scenes and objection modes are available for concerts, food, night, people, and more. In most of our tries the Honor View10 accurately and quickly recognized the object in the scene, and helped produce an optimized shot without fuss.

Overall, there’s a lot we like about EMUI 8.  We really like how it takes great advantage of the rear fingerprint reader for all sorts of neat swipe controls. It also offers lots of customization options, neat optimization features, and it runs very fast.  But if you’re not a fan of EMUI 8, we have good news for you. Honor has made it possible to root your phone and insult custom ROMS on it – all without violating your warranty.

With all of that said, the Face Unlock feature is not yet available on the Honor View10. However Honor says it will be available via an OTA update.

Honor has designed the View 10 with gamers in mind. The phone is pre-loaded with a game suite that optimizes the phone for the best gaming performance. It also features an uninterrupted gaming feature that stops calls or messages from coming in while you’re engrossed in a game.

When it comes to performance, the Honor View10 is no slouch either. The phone is powered by Huawei’s own Kirin 970 chipset which its built-in NPU (neural-network processing unit) which is what’s powering the phone’s AI features. The processor is complemented by 6GB of RAM and 128GB of on-board storage that can be expanded via a MicroSD card.

The Honor View10’s benchmarks indicate that it’s a smidge faster than even the Huawei Mate 10 Pro, and faster than the likes of the OnePlus 5T, and the Samsung Galaxy Note 8. That’s very impressive for its $499 price point. General day to day performance feels super peppy and we’ve rarely encountered any lag. The fingerprint scanner works lightning fast.

The Honor View10’s dual-lens rear camera packs in a 20 MP monochrome camera + a 16MP RGB camera with a F/1.8 aperture and 2X zoom. That’s an impressive amount of megapixels. In addition to scene detection modes, the camera is chock full of features like a portrait mode with “bokeh” effects, HDR, panorama mode, and a slew of manual settings are available to choose from.

Auto mode produces pretty good and fast shots. Unfortunately, the camera lacks optical image stabilization. When taking photos in daylight, this isn’t much of an issue. But the lack of OIS causes most shots to come out blurry in lowlight conditions.

The 3,750 mAH battery provides over a full day of use. Between its large 3,750 mAH battery and smart power management, the Honor View10 offers very good battery life. It also features supercharge which charges up the phone to 100% in just a little over 2 hours.

On the other hand, the Honor View 10 comes with more onboard storage at the same price point.

Face Unlock on the OnePlus 5T works extremely well and fast – even better than it does on the iPhone X. On the other hand, the Honor View10 doesn’t have the Face Unlock feature available yet.

Overall, the Honor View10 is a viable OnePlus 5T alternative, but there is no clear winner here, and you certainly can’t go wrong with either phone. Which brings us to this – if Honor could drop the price on the View10 further, that would give the View10 a significant edge over the OnePlus 5t. 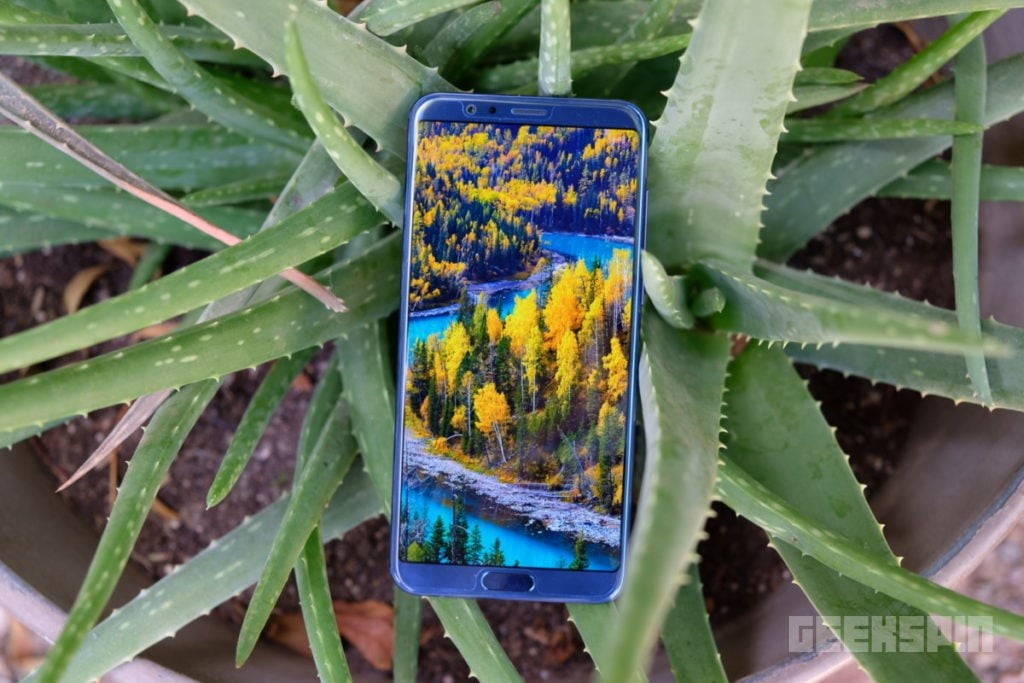 At $499, if the Honor View10 is still too pricey for you, or you just don’t require all of its raw performance, we highly recommend checking out the Honor 7X. For just $199, the Honor 7X is a phone that looks and feels a lot more premium than it actually costs.

On the other hand, if you’ve been eyeing the Huawei Mate 10 Pro but its $699+ price tag is too much for you, the Honor View10 is a great alternative. Sure, you won’t get the same premium glass body of the Mate 10 Pro, or its OIS, but the Honor View10 offers nearly identical features and components for $200 less.

The Honor View10 retails for $499 unlocked in the U.S. at Amazon, or you can purchase it directly from Honor’s web site. A transparent slim silicon case is included in the box.

Buy now on Amazon [wp-review id=”3132″]
If you buy something from a GEEKSPIN link, we may earn a commission