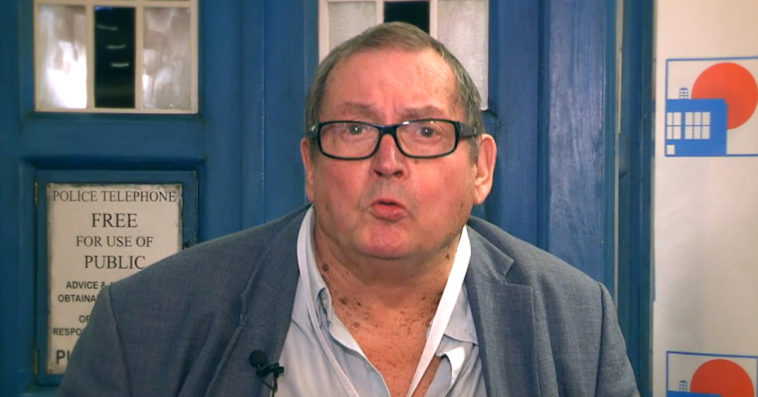 Terrance Dicks, one of the original writers on the BBC classic television series Doctor Who, has died. He was 84.

According to his talent agency The Agency, Dicks died last Thursday, August 29th, after a short illness. Held in high regard by the Doctor Who fanbase, Dicks’ writing has been an inspiration to many, most especially to the younger generation of Doctor Who scribes like Chris Chibnall, Neil Gaiman, Mark Gatiss, and Gary Gillatt.

We are sad to report the death of Terrance Dicks, one of the original writers of Doctor Who. https://t.co/E6LCaWtB8x

“The lights of Doctor Who are dimmer tonight, with the passing of Terrance Dicks. He was one of the greatest contributors to Doctor Who’s history, on screen and off,” said Chibnall in a statement after news of Dicks’ death broke. “As writer and script editor, he was responsible for some of the show’s greatest moments and iconic creations. As the most prolific and brilliant adaptor of Doctor Who stories into Target novels, he was responsible for a range of books that taught a generation of children, myself included, how pleasurable and accessible and thrilling reading could be. Doctor Who was lucky to have his talents. He will always be a legend of the show. Everyone working on Doctor Who sends his family and friends our love and condolences at this difficult time.”

Meanwhile, Gaiman, Gatiss, and Gillatt took to Twitter to pay tribute to Dicks, with each one of them recalling how his works have inspired them and other Doctor Who fans all over the world.

I remember reading his and Malcolm Hulke's book THE MAKING OF DOCTOR WHO when I was eleven or twelve, and deciding then that I would one day write an episode of Doctor Who, because they had shown me how. RIP Terrance Dicks. https://t.co/LXKsfSJz81

Very hard to express what Terrance Dicks meant to a whole generation. A brilliant TV professional, a funny and generous soul. Most of all, though, an inspirational writer who took so many of us on unforgettable journeys into space and time. Bless you, Terrance.

Tragedy to have lost #TerranceDicks – among the true greats of Doctor Who, and the sweetest, most self-effacing man. One comfort… His work, which has inspired so many, will go on to inspire millions more who are not yet born, passed from parent to child for generations to come.

Following Dicks’ discharge from the armed forces, he worked as an advertising copywriter and started to write radio play scripts for the BBC in his spare time. He then ended up co-writing a number of episodes of the action-adventure series The Avengers for the Associated British Corporation with his friend Malcolm Hulke.

Dicks was subsequently hired as assistant script editor on Doctor Who in 1968, and was appointed head script editor the following year. He earned his first writing credit for the show when he and Hulke co-wrote the 10-part serial The War Games, which concluded the series’ sixth season and Patrick Troughton’s tenure as the Second Doctor.

Dicks went on to write several other Doctor Who episodes, including The Brains of Morbius, Horror of Fang Rock, State of Decay, and 20th-anniversary special The Five Doctors.

Dicks was also the author of many Doctor Who-centric stage plays and audio dramas as well as over 60 Doctor Who tie-in novels published by Target Books. His final short story Save Yourself will be published next month in BBC Books’ Doctor Who: The Target Storybook.

Dicks’ non-Doctor Who works include TV shows Crossroads, Moonbase 3, and Sunday Classics. He is survived by his wife Elsa and his three children.