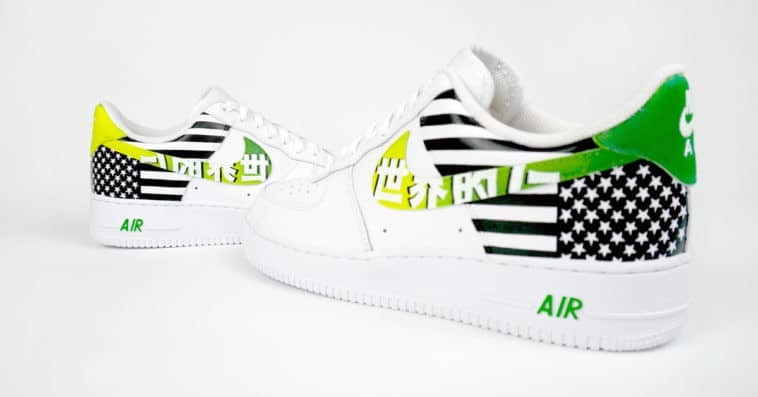 A$AP TyY dropped the highly anticipated music video for its new single Who Ain’t With Me last Friday, and accompanying its exclusive release on droppTV was the debut of the rapper’s new official merchandise collection, including Nike Air Force 1 shoes customized by the London-based artist team, CroxxHatch.

CroxxHatch creative director Leena Tulsidas said that the A$AP TyY AF1s were inspired by three things: TyY as a creative artist, his merchandise, and the style and influence of the A$AP Mob ― a New York-based hip hop collective that includes rap titans A$AP Rocky and A$AP Ferg, among many others.

“We were able to get an insight into his new music and see the initial mock-ups of his upcoming merchandise,” Tulsidas said in a statement. “There were a few features that stood out to us immediately which we wanted to incorporate into the custom sneakers: the neon green and the Asian text which was different and trendy from a sneaker design perspective, and A$AP Mob’s version of the upside-down American flag.”

The sneakers also include a color-changing feature created using a thermal pigment that changes from a neutral state of green to a lime yellow when heat is applied.

There are only 25 pairs of the A$AP TyY AF1s available and they can only be bought through the first-ever shoppable streaming platform, dropptv. As viewers see A$AP TyY wearing these shoes in the music video, they can click and buy them straight from it thanks to droppTV’s unprecedented AI technology.

“droppTV is allowing me as an artist to monetize my merch throughout the music video,” said A$AP TyY.  “Fans are able to see what I’m wearing on screen and purchase it that moment, so it was a no brainer to partner with droppTV. They have supported my visions from day one and helped bring these visuals to life.”

The droppTV app is available on iOS and Android.