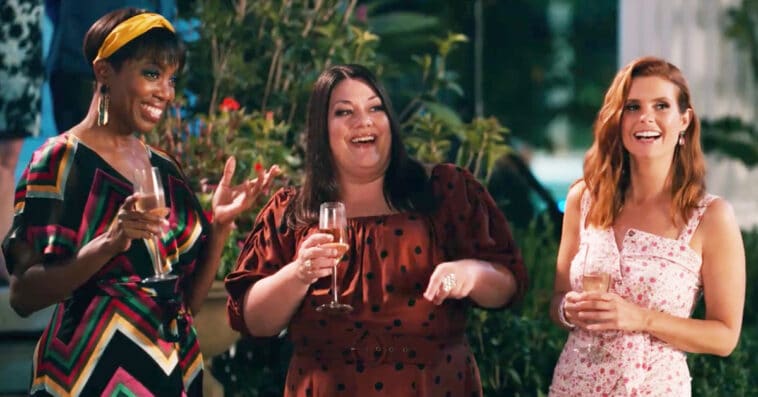 The story of Maddie, Dana, and Helen’s friendship is far from over.

Is there a season 3 of Sweet Magnolias?

Who will return for season 3 of Sweet Magnolias?

Stars JoAnna Garcia Swisher (Maddie Townsend), Brooke Elliott (Dana Sue Sullivan), and Heather Headley (Dana Sue Sullivan) are all set to reprise their roles in season 3. Also back for the new batch of episodes is showrunner Sheryl J. Anderson and her fellow executive producers Dan Paulson and Sherryl Woods, who is the author of the novel series on which the Netflix series is based.

“We’re thrilled to be embarking on our third season for Netflix, and we’re looking forward to returning to Serenity,” Paulson said in a statement, referring to the setting of the show.

What will happen in season 3 of Sweet Magnolias?

Sweet Magnolias follows Maddie, Dana, and Helen ― three South Carolina women who are best friends since childhood as they shepherd each other through the complexities of romance, career, and family. Season 2 ended with the trio mourning the passing of Miss Frances (Cindy Karr). At the funeral, Ryan (Michael Shenefelt) asks Helen, who’s now in a relationship with Erik (Dion Johnstone), to marry him.

“We wanted somebody to come and shake up that balance [between Helen and Erik], and Ryan’s the perfect one to do that,” Anderson told Entertainment Weekly after the season 2 finale last February. “I hope to have a season 3 to be able to figure that out. I know what she’s going to say, but I wouldn’t guess that timeline. If we’re fortunate enough to have a season 3, that will be one of the chief topics at the beginning of the writers’ room.”

Anderson also teased how season 3 will disrupt the status quo that fans have gotten accustomed to since season 1.

“One of the reasons that we didn’t bring a lot of new people into season 2 was [because] we have such an amazing ensemble. In looking at how to end season 2, and in the hopes of getting a season 3, we thought, ‘wouldn’t it be fun if it looks like everybody knows exactly what they have to grapple with going forward, then out of nowhere, here comes this meteor,’” said Anderson. “We wanted to indicate that if we come back, not everything is under control.”

When does season 3 of Sweet Magnolias come out?

Sweet Magnolias season 3 doesn’t have a release date yet, but it’s likely that it will premiere on Netflix in 2023.