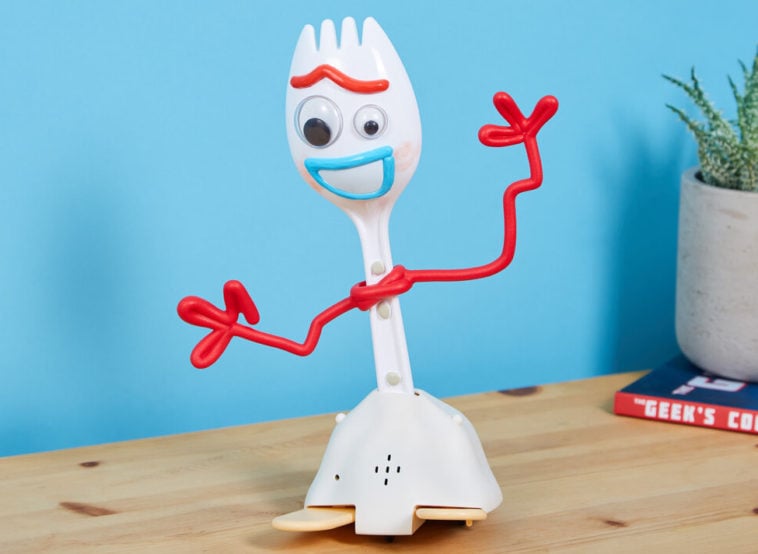 The Toy Story franchise has always been one that has spawned beloved characters and toys. One of the newest characters is Toy Story 4’s Forky, a character that everybody fell in love with despite being made out of trash. Those looking for a toy replica of the character don’t have to wait any longer; Firebox, known for selling quirky pop culture-related products, has unveiled a voice command version of the character. Voice Command Forky comes with over 35 phrases from Toy Story 4, alongside a host of movements.

Featuring audio recognition software, the toy can recognize, and respond to, a variety of phrases. This extends to songs – play music and he’ll dance along to the tunes. Similar to the film he first appeared in, he can bust a move for anything ranging from Nine Inch Nails to Randy Newman.

In the description of the new toy, Firebox notes:

“You can even have a chat with him as he responds to your voice, moving his arms and eyes and saying 35+ different phrases from Toy Story 4 and beyond. It’s enough to make you wish you were a kid again.”

Alongside dancing, speaking, and recognizing audio, the character can also walk, and his walk is almost identical to how he moves in the film.

Forky can be ordered online and is available worldwide. Prices start from £49.99/$62.99, although shipping costs may apply and so far, for some reason, Forky isn’t available to ship to the U.S. Fortunately, batteries are included so buyers will be able to interact with the plastic character straight away.