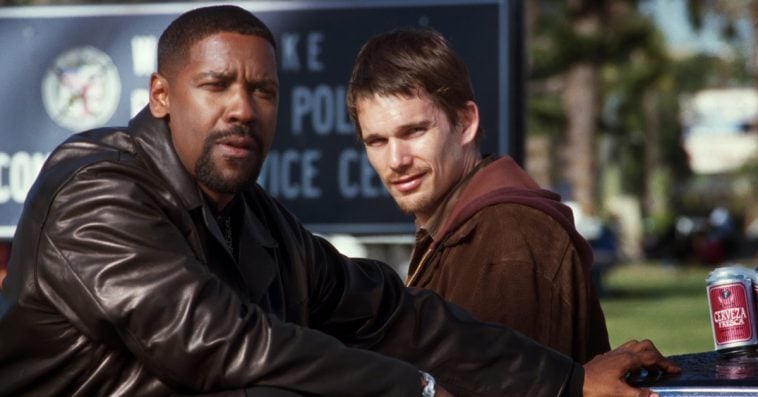 Antoine Fuqua’s 2001 film Training Day is getting a prequel.

Warner Bros. Pictures has recruited up-and-coming scribe Nick Yarborough to write the prequel that will be set nearly a decade before the original movie.

Sources told Collider that the events in the new film will take place in late April of 1992, just two days before the announcement of the infamous Rodney King verdict, in which Los Angeles Police Department (LAPD) officers were acquitted of charges of the brutal beating of King. The verdict divided the citizens of Los Angeles and resulted in riots that turned the city into a fiery war zone, which changed its face forever.

Written by David Ayer, the original Training Day movie took place over a 12-hour period in the gang-ridden neighborhoods of Westlake, Echo Park and South Central Los Angeles, where rookie LAPD narcotics officer Jake Hoyt (Ethan Hawke) — on his first day on the job — dealt with the perils brought on by his crooked detective partner Alonzo Harris (Denzel Washington).

The prequel will follow a younger version of Alonzo Harris, a role that gave Washington a Best Actor Oscar win. Hawke was also nominated for an Oscar for his role in the film, which grossed more than $100 million worldwide.

Though no one is currently attached to play the lead role in the prequel, Collider reported that Warner Bros. would likely go first for Washington’s 35-year-old son, John David Washington. Aside from the fact that John David looks and sounds like his father, he, too, is the lead in Christopher Nolan’s upcoming action thriller Tenet, which is also being made by Warner Bros.

While it would make total sense for the film studio to pick John David for the role, there’s also a possibility that the young actor doesn’t want to take over the character at all, given the big shoes he has to fill.

The prequel is still in the very early stages and no director is attached yet. And since Bobbie Newmyer, the producer of the original movie, passed away in 2005, it’s not clear who would produce the prequel. It’s possible, however, that Fuqua, Ayer, and surviving producer Jeffrey Silver would return as executive producers.