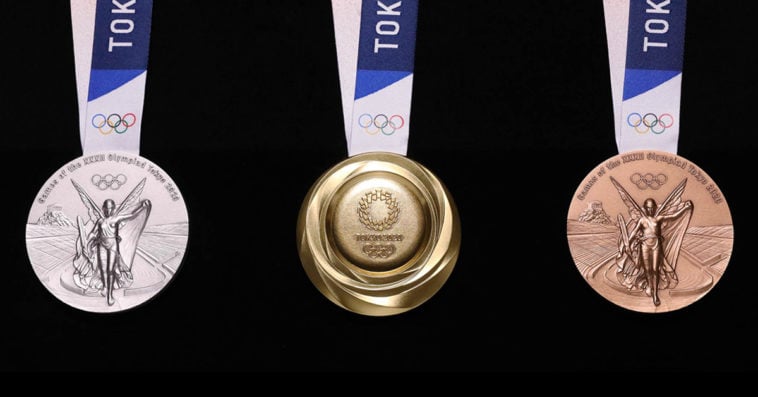 The design of the medals for the Tokyo 2020 Olympic Games has been unveiled on Wednesday, exactly one year before the highly anticipated sporting event begins. As expected, the medals look prestigious, but unlike all Olympic medals in the past, these medals are 100 percent sustainable.

Each medal was molded entirely from metal extracted from recycled consumer electronics, which were collected from sports fans across Japan over the past two years through the landmark recycling initiative called Tokyo 2020 Medal Project.

The moment you have all been waiting for, your #Tokyo2020 Olympic Medals! ???

More than 90 percent of Japan’s local authorities participated in the initiative, which collected a total of 78,985 tons of discarded devices, including approximately 6.21 million used mobile phones, along with digital cameras, handheld game consoles, and laptops. All of these consumer electronics were classified, dismantled, and melted down by highly trained contractors.

The medals were designed by Junichi Kawanishi, director of the Japan Sign Design Association and the Osaka Design Society, who was chosen from a competitive pool of more than 400 professional designers and design students.

“It is a great honor that my design was selected for the Tokyo 2020 Olympic medal,” Kawanishi said in a statement. “I never dreamed that the design I submitted only as a memorial to this lifetime event would actually be selected. With their shining rings, I hope the medals will be seen as paying tribute to the athletes’ efforts, reflecting their glory, and symbolizing friendship.”

The front of the medals bears the Tokyo Olympic emblem, while the back shows the Greek goddess of victory Nike and the Panathenaic Stadium. According to the Tokyo Organizing Committee of the Olympic and Paralympic Games (TOCOG), the medals were designed to “resemble rough stones that have been repeatedly polished and now shine brightly, reflecting the athlete’s journey from beginner to Olympic champion.”

The Tokyo 2020 Medal Project is just one of many environmentally friendly programs implemented by TOCOG. Watch the video below to see all the 6 ways Tokyo 2020 Olympics is getting sustainable.