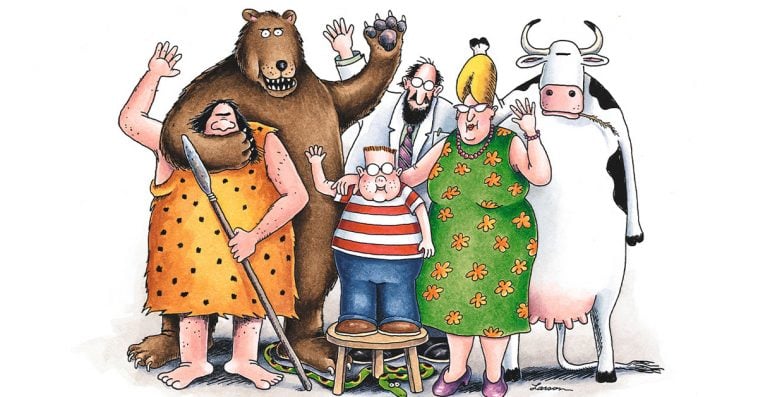 The Far Side has a new home.

The iconic single-panel comic by Gary Larson, which ran daily in newspapers from 1980 to 1995, has launched its first official website on Tuesday. Called TheFarSide.com, the website offers a random selection of cartoons updated daily, themed collection of cartoons updated weekly, and never-before-seen extras such as sketches straight from Larson’s personal sketchbooks.

Although Larson has been retired for almost 25 years now, the website will also periodically unveil new work from the cartoonist beginning in 2020, which marks the 40th anniversary of The Far Side.

In a lengthy letter posted on the website, Larson himself revealed what finally made him share his works online despite his hesitation to fully embrace the Internet.

“Years ago, when I slowly started realizing I had a second publisher and distributor of my work, known as Anyone With a Scanner & Associates, I did find it unsettling enough to write an open letter to ‘whom it may concern,’ explaining — best as I could — why I preferred that the people doing this would kindly refrain,” recalled the 69-year-old Tacoma native. “I won’t rehash it all here, but my powers of persuasion had at least some impact, and many of my fans were very understanding and responsive. Maybe it takes a warped mind to understand a warped mind. (No, seriously, my thanks to those who removed my cartoons willingly, or even begrudgingly.)”

However, despite his efforts, there are still lots of fans who have continued to publish his works online, causing him to wonder if his then-absence from the web may have made people to believe that his cartoons were up for grabs. “So I’m hopeful this official website will help temper the impulses of the infringement-inclined,” Larson wrote. “Please, whoever you are, taketh down my cartoons and let this website become your place to stop by for a smile, a laugh, or a good ol’ fashioned recoiling.”

Huge improvements in security and graphics have also helped convince Larson that is about time to take his works to the online world officially. “My change of heart on this has been due not only to some evolution in my own thinking, but also in two areas I’ve always cared about when it comes to this computer/Internet ‘stuff’: security and graphics,” wrote Larson. “Better security is, of course, just better security. … But the other one — the advancements in graphics — has been a big incentive for me.”

Speaking of graphics, Larson also just revealed to The New York Times that he recently got a tablet, and that he’s been really enjoying drawing again.