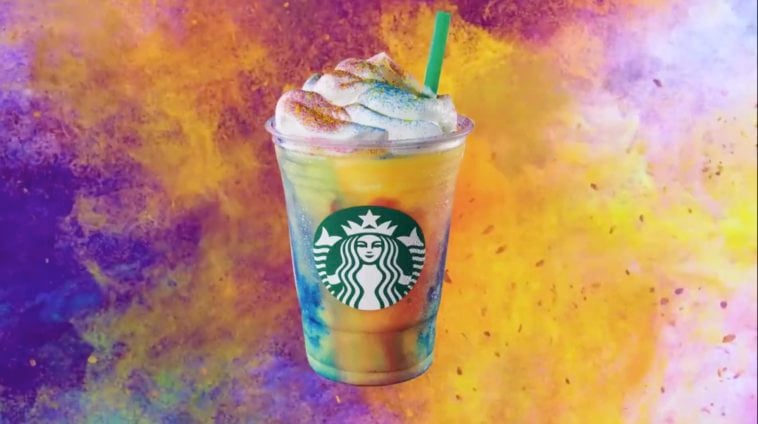 Rumors have been spreading over the past few weeks of a tie-dye frappucino coming to Starbucks. The coffee giant has put these to bed by confirming the reports, however, they’ll only be around for a very short time. Unfortunately, the fraps will not be caffeinated. Instead, the tie-dye frappucinos will be crème-based.

Customers will have the choice to order the tie-dye frappucinos with ice, milk or crème syrup, and there is an optional vanilla whipped cream topping. The drink uses natural food coloring, which adds red, blue, and yellow swirls; specifically, Starbucks baristas will be using turmeric, red beet, and spirulina. To further complement the colors, there’s a touch of colored sugar added on top.

YESSSS! ? #TieDye is here and it won’t last long. pic.twitter.com/QyqS3zmuZO

According to the company, as well as customers who have been quick enough to try it, the tie-dye frappucinos have a tropical fruit flavor. Comparisons have been made on Twitter to it tasting both like a Fun Dip sugar stick as well as a banana-flavored Laffy Taffy. Several customers have also noted that many baristas have taken to wearing tie-dye clothing as a way to complement the look of the frappucino.

Starbucks’ tie-dye frappucinos are currently only available in the United States and Canada. And because of how limited the drink is, it doesn’t look likely that they’ll be heading to Europe anytime soon.

Baristas with the company have noted that the drink takes a considerable amount of time to make; so don’t order one if you’re in a rush.