Samsung just announced the Galaxy Note10 and it’s pretty much everything the leaks already revealed it to be. To that effect, there are two Note 10 models that have been announced – a 6.3-inch model and the larger Note10+ 6.8-inch model. Both models are less than 8mm thin and feel noticeably thinner and more compact to hold in comparison to their predecessors. The Note10+, in particular, is the most compact Note to date. 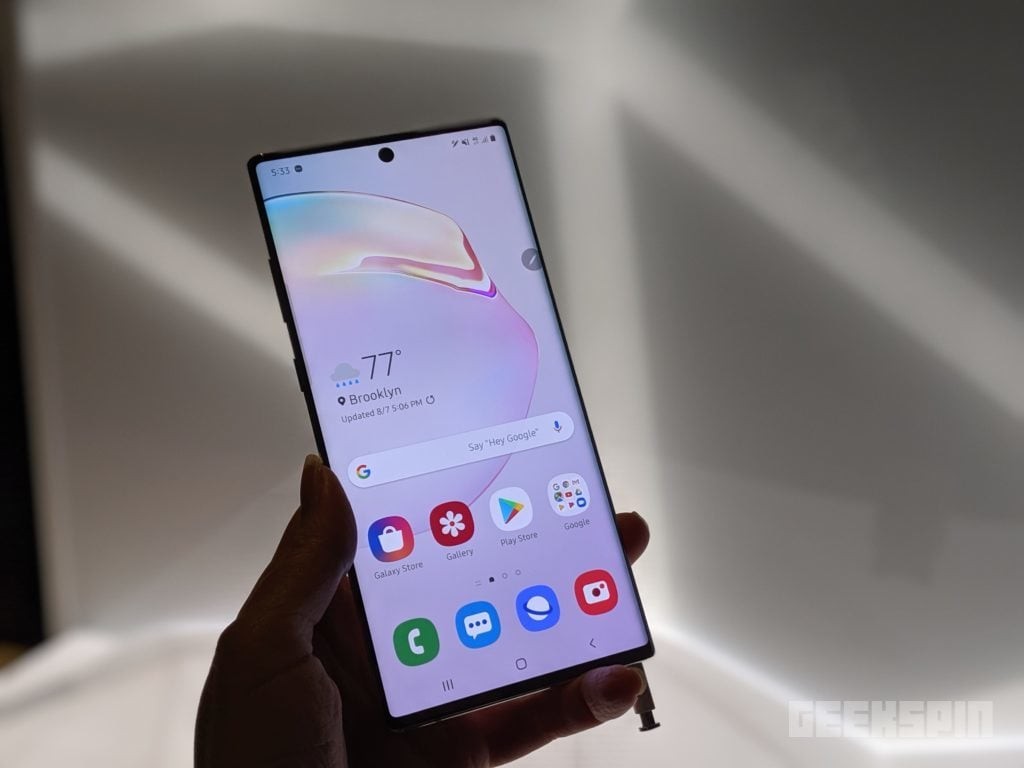 When it comes to its Dynamic AMOLED display, the Note10’s display has virtually no bezels. Even the minuscule camera cut out has been reduced so that it’s not taking up much space on the phone. Under the display, there is an ultrasonic fingerprint reader that uses machine learning to distinguish between real and fake fingerprints.

Years ago, the Samsung Note10 invented a whole new category of “phablet” phones. But today, just about every flagship is a phablet. So it’s really the S Pen that makes the Galaxy Note10 stand out amongst the competition – because even in 2019, phones offering serious stylus support are difficult to come by.

Fortunately, with the Note10, Samsung is introducing some new tricks to the S Pen. For starters, handwritten notes can now be converted to text which can be saved as text files, PDFs or Word documents. The S Pen now offers S Pen Air actions. You can use the S Pen to zoom in and out, to wave between camera modes, to control the volume or to play and pause while watching a movie. All of these air gestures work without having to ever touch the Note’s screen. Samsung is also opening up the SDK to allow developers to create custom uses for the S Pen’s air actions.

The camera app has a wealth of new features to offer as well. That includes bokeh effects in video, live focus video, a built-in video editing suite, and the super steady feature which uses the phone’s gyro sensor to automatically stabilize video footage for you. The camera on the Note 10+ itself is a depth-sensing camera. It’s able to scan a 3D object, map the object’s body, and then bring it to life in 3D. You can then take that 3D object and the object will be able to track and mirror someone’s movements in AR.

Speaking of AR, the new AR doodle feature in the camera app lets you draw with a 3D brush. The doodle is able to detect the subject’s face and track around it. Is this AR Doodle feature very useful? Probably not, but it’s a fun implementation of AR. 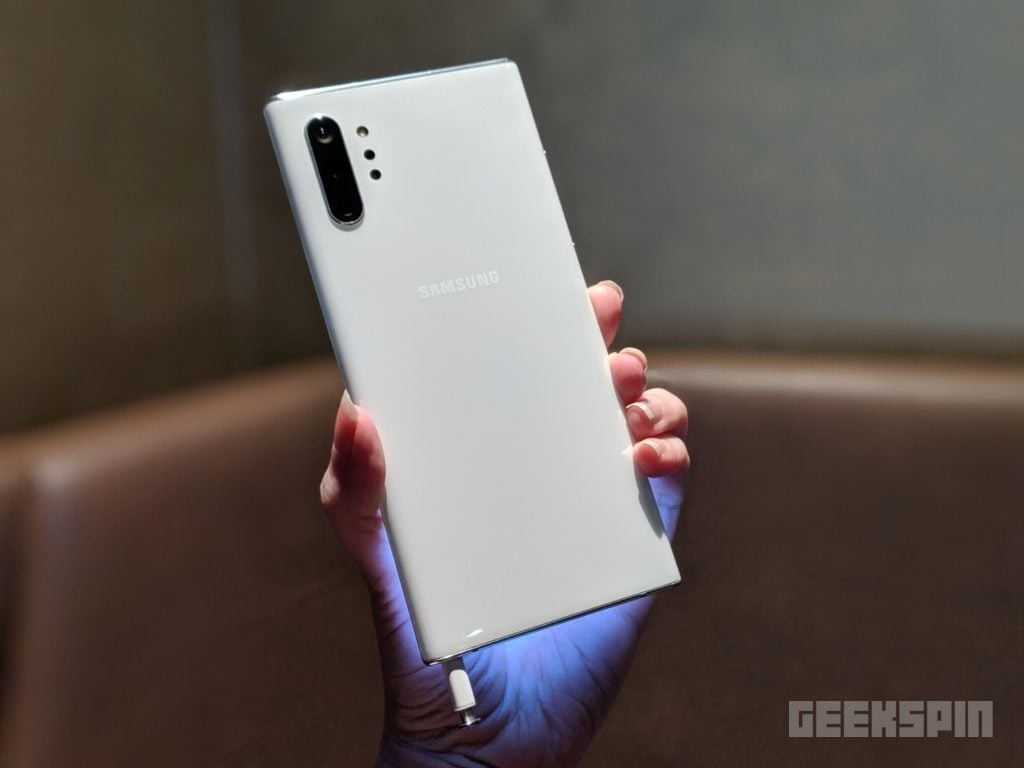 Samsung says the Note10’s CPU is 33% faster than the Note 9. Under the hood, the Galaxy Note 10 is powered by a Qualcomm Snapdragon 855. The company also says that the phone has been designed for serious gaming. It features an intelligent game booster that analyzes our gaming patterns and optimizes the phone’s performance accordingly. In addition, its hardware features a vapor chamber that cools your phone down when the phone is heating up. Samsung has also teamed up with Discord so that you’ll be able to voice chat with your squad directly while playing multiplayer games.

When it comes to battery life, the phone should last all day. It also supports fast wireless charging 2.0 and super fast wired charging up to 45 watts. That means you can charge your phone from zero to 100% in 30 minutes.

Samsung’s DeX software has allowed previous Galaxy phones to connect to a monitor via USB-C, allowing the phone to offer and power a PC-like desktop experience. The company has updated DeX so that it now allows you to reply to texts from your laptop, and to receive / mirror notifications from your phone on your PC. Support for making calls on your PC is supposed to be on its way too. In any case, while these additions to DeX are certainly welcome, it’s worth noting that Apple and many other smartphone makers have been offering PC to smartphone mirroring features for a while now.

There’s no question that the Galaxy Note10 series is a premium phone. We love its new compact form factor and that it’s packed with every top tier spec you could want in 2019, yet in many ways, the phone is also playing catch up with other flagships, and that makes its high price tag pretty hard to swallow. Sure, Apple is still able to command crazy high prices for their handsets but that is because of the closed ecosystem that is iOS. The question is can Samsung still demand such high prices for the Note10 series at a time where the likes of the OnePlus 7 Pro and other affordable flagship Android phones on the rise?

Pricing for the Samsung Galaxy Note10 models begins at $949 while the 10+ starts at $1099. All of the models come with 256GB of onboard storage, but the Note10+ has a 512GB option as well. The Note10+ will also be available in a 5G model which will initially be available from Verizon only, with other carriers eventually following suit. Preorders begin August 8th at 12:01 a.m. ET.