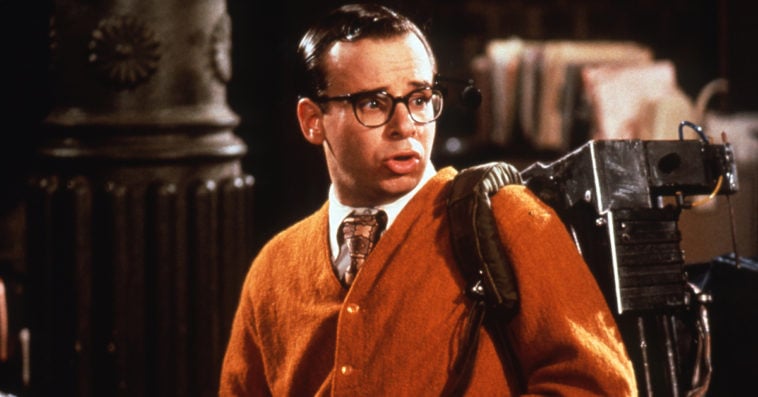 Rick Moranis, best known for his roles in Ghostbusters and Honey, I Shrunk the Kids, is recovering after being assaulted by a stranger in New York City.

According to the New York City Police Department, the random and unprovoked attack happened in broad daylight just before 7:30 a.m. on Central Park West near 70th Street.

Surveillance cameras captured the assault and in footage released by the police, the suspect ― ironically wearing an “I Love New York” hoodie ― walked up and hit the beloved 67-year-old actor in the head, knocking him to the ground. The attacker continued walking north after throwing the punch.

🚨WANTED for ASSAULT: On 10/1, at 7:24 AM, a 67-year-old male victim was walking southbound on Central Park West in the vicinity of West 70th Street, when an unidentified male struck him in the head with a closed fist, knocking him to the ground. Have info? Call/DM @NYPDTips pic.twitter.com/ZvSUPjtVdp

Police have not yet made any arrests and have asked for the public’s help in identifying the suspect. Based on a tweet that comes with the surveillance footage, the NYPD is offering a $2,500 reward for information leading to the arrest of the suspect. On Friday afternoon, a much clearer photo of the wanted male was released online.

Following the attack, Moranis went to the hospital with pain in his head, back and hip. He then walked to the precinct to report the crime.

A number of celebrities, including actors Chris Evans, Ryan Reynolds, Josh Gad, and Sam Witwer, as well as film and TV producer Adam F. Goldberg, took to social media to express their frustration over the attack.

My blood is boiling. Find this man. You don’t touch Rick Moranis. https://t.co/VXBbTjdDwa

Should have known not to subject Rick to the year 2020. Glad to hear he’s okay.

The rage I am feeling right now is beyond words. Who does this? What psychopath does something like this to a man in his 60’s. Speedy recovery my friend. 🙏🙏 https://t.co/u87CizhfHc

The most important person in our country has been sent to the hospital today. As his biggest fan and supporter, I send Rick Moranis all the good vibes in my body. The country is united. You deserve better. #JusticeForMoranis

On Friday, Moranis’ representative Troy Bailey said the actor is “fine but grateful for everyone’s thoughts and well wishes.”

Moranis rose to prominence in the 1980s as a member of the cast of Second City Television. He then became a household name after playing the role of Louis Tully in the 1984 blockbuster hit Ghostbusters. Since his wife’s death from cancer in 1991, Moranis has mostly kept a low profile to focus on raising his children. But in February, it was announced that Moranis — for the first time in more than two decades — would return to the big screen to reprise his iconic Honey, I Shrunk the Kids role of Wayne Szalinski in a sequel movie, tentatively titled Shrunk.