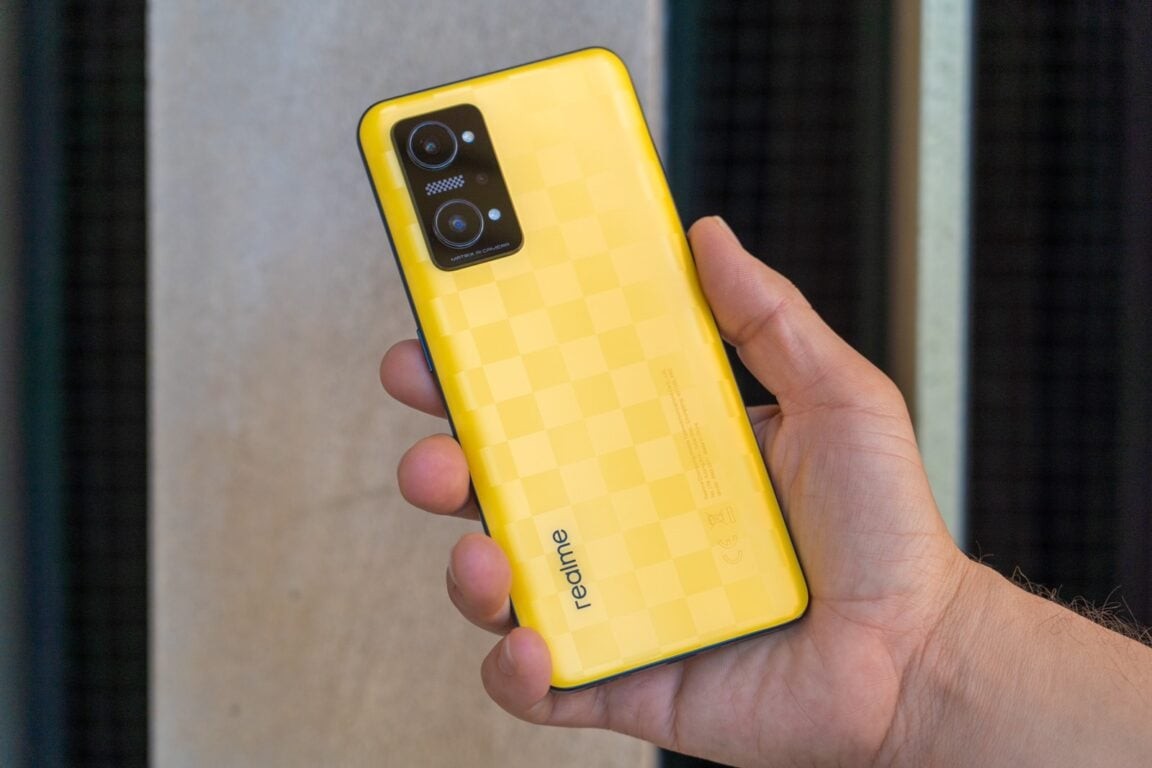 These days it seems that more or less most phones all look alike. But that’s not the case with the Realme GT Neo 3T.

This mid-range phone’s design is inspired by a racing flag. Its yellow checkered flag design is bright and bold, and a refreshing change of pace from what’s on the market these days. The Neo 3T is actually an offshoot of the GT Neo 3 which sports an even bolder, racing stripe design. But if the Neo 3T’s bright yellow color is too much for you, it’s also available in a much more subtle Shade Black option sans the checkered pattern.

The phone’s body is made of a combination of polycarbonate and plastic, but it doesn’t feel cheap or flimsy at all.

Under the hood the GT Neo 3T is powered by the speedy and capable Qualcomm’s Snapdragon 870 chipset. Day-to-day performance is excellent and will satisfy nearly every type of user. Gamers will appreciate that the device runs quite cool thanks to its internal vapor chamber cooling solution.

The Neo 3T comes running Android 12 with the Realme UI 3.0 interface. We don’t mind the Realme UI 3.0 interface – it comes with some useful features, including plenty of useful gaming options. Unfortunately the device also come with lots of bloatware apps, but at least they can be easily deleted. We also find the bloatware forgivable given the device’s wallet-friendly price tag.

Battery life for the RealMe GT Neo 3T is good – you’ll be able to get through a full day of use. But what we really appreciate is its support for 80W fast-charging which charges the device up to 50%  in just 15 minutes. Yes, there are faster-charging phones out there, but 80W fast charging is a welcome bonus for a budget device. Unfortunately, the Neo 3T does not support wireless charging.

The camera array on the Neo 3T includes 64MP primary lens, as well as an ultra-wide-angle, a macro lens, and a 16MP selfie camera. The main shooter is able to snap some very good photos, as long as there is ample lighting available. In low lighting conditions, images tend to struggle and often end up being blurry and washed out. That said, daylight photos and portraits in particular are above average for a phone in this price range.

On the flip side, the ultra-wide camera really struggles in low light and the 2MP macro can’t manage to take a decent shot.

Realme has been killing it this past year. They’ve developed a track record for producing beautifully designed, featured-packed phones that don’t break the bank. But while the Realme GT Neo 3T may not be our favorite Realme phone, to date, it still exemplifies what the brand has to offer: a combination of innovation and great value.

Ultimately, the Realme GT Neo 3T is a great mid-range phone, so much so that it begs the question of whether you need to spend more to get a flagship at all. But if cameras are very important to you, then you probably will want to opt for a flagship or to look elsewhere at something like the new Pixel 6a. Otherwise, if you’re looking for a bold, speedy and capable phone, that won’t break the bank, and you’re in a region where the GT Neo 3T is available, then the Neo 3T could be the phone for you. This powerful mid-range phone has a design that is inspired by a checkered racing flag.