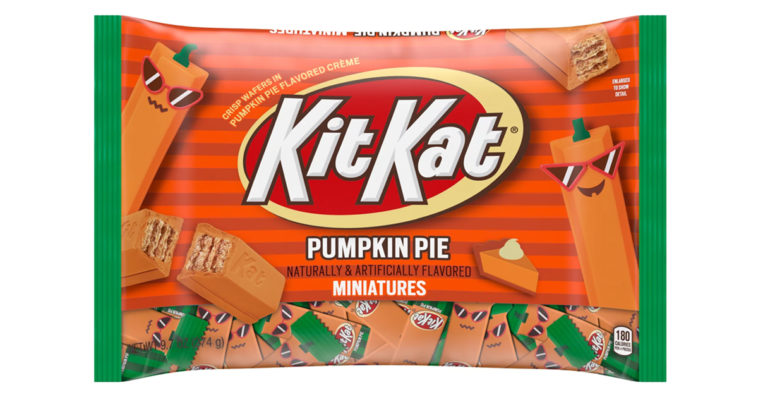 The Hershey Company is bringing back Pumpkin Pie Kit Kats in time for this year’s Halloween.

Described as “crispy wafers in a pumpkin pie-flavored crème,” Pumpkin Pie Kit Kats will be available in 9.7-ounce bags of individually-wrapped miniatures, which come in new bright jack-o’-lantern packaging.

With a price tag of around $3.99 each bag, Pumpkin Pie Kit Kats will be sold nationwide for a limited time starting August.

Pumpkin Pie Kit Kats hit the store shelves for the first time during the 2017 Halloween season, which was actually quite surprising because it took Hershey’s that long to add the now-favorite fall flavor to its lineup. But it’s definitely worth the wait, as the favorable response to the flavor indicates that Hershey’s had perfected the taste of its pumpkin pie-flavored Kit Kat.

Apparently, Pumpkin Pie Kit Kats aren’t the only chocolatey treats Hershey’s has prepared for the sweetest holiday this year. The candy company is also bringing back Reese’s Peanut Butter Pumpkin, which will retail for $0.99 per 1.1-ounce package and $1.49 per 2.2-ounce package. Additionally, Hershey’s is releasing Reese’s Stuffed with Pieces Pumpkin, which is basically classic Reese’s Peanut Butter Pumpkin but with crunchy Reese’s pieces “stuffed” inside the center.

Last but not the least; Hersey’s Halloween Assortment Skull Bowl will also be available at your favorite stores in time for Halloween. Selling for $19.99, this bowl of chocolatey goodness is packed with Reese’s and Hershey’s Miniatures, which include milk chocolate, dark chocolate, Mr. Goodbar, and Krackel.