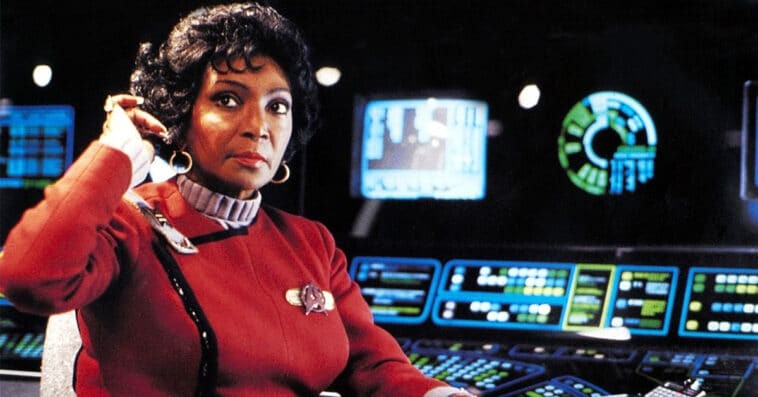 Nichelle Nichols, best known for her role as Nyota Uhura in Star Trek: The Original Series, is at the center of an ongoing conservatorship battle.

Nichols’ only child and current conservator Kyle Johnson, her former manager Gilbert Bell, and her concerned friend Angelique Fawcette all appear to be waging a fight to oversee the finances of the aging actress, who is struggling with dementia.

According to an in-depth report about the conservatorship battle published by the Los Angeles Times over the weekend, Nichols collapsed in her living room and was taken to the hospital back in January 2013. Diagnosed with pancreatitis due to her increased drinking over the years, Nichols recovered in the hospital, where Johnson, Bell, and Fawcette all crossed paths.

On a low point during Nichols’ hospitalization, Fawcette and her husband director Steven, said that they were the only two people by the actress’ side. “She was definitely gasping for breath,” Fawcette, 51, recalled. “She was calling out to her people who had passed away.”

After weeks in the hospital, Nichols moved into a nursing and rehabilitation facility. And on the day Bell helped Nichols leave the rehabilitation facility, she signed an advance health care directive and a general power of attorney naming Bell as primary agent, allowing him to make healthcare decisions and to manage finances for her. Fawcette was named as a successor.

That night, Fawcett recorded a video of Nichols, in which she responded to questions about her career and desire to work. At one point during the interview, Nichols said, “My son thinks that I should be letting up, you know. I say to him, ‘Kyle, when you pay my bills you’ll be able to tell me what to do.’” The interview was released in 2018 ― the same year Johnson petitioned for conservatorship.

Johnson said he filed a conservatorship petition in May of that year after finding out that Bell had transferred Nichols’ Woodland Hills home into his name in 2017. After filing the petition, the probate court suspended Bell’s power of attorney, and Nichols’ home was transferred back into her name. Johnson moved to Los Angeles to serve as Nichols’ sole caregiver while also serving as her manager.

But in August 2018, Fawcette went to court to object to Johnson’s petition for conservatorship, accusing Johnson of primarily wanting access to Nichols’ income and personal property. In a court response he filed to Fawcette’s petition to enforce visitation rights, Johnson fired back, accusing Fawcette of wanting to profit from Nichols’ fame.

Though Johnson was finally appointed conservator of Nichols’ person and estate in January 2019, the battle has continued. In a video Bell recorded in April of that year, Nichols reads conservatorship documents in her guesthouse and at one point says, “I didn’t give permission to have conservatorship over me.”

Since Johnson largely declined to respond to subsequent requests for comment following his initial interview with the Los Angeles Times, it’s not exactly clear how Nichols want to live out her final years. However, the quest to bring Nichols home to her Woodland Hills house now appears impossible, as Johnson confirmed in a brief email to the Los Angeles Times that the property was already sold, noting that the proceeds from the sale were placed in his mother’s conservatorship account to ensure her continued care. The house was purchased by Baron Construction & Remodeling Co. for nearly $2.2 million.

Johnson, Bell, and Fawcette may ultimately meet in court to decide Nichols’ fate, but for now, the legendary actress is living in a rental house in an undisclosed location in New Mexico with her son and his family.

“We have moved here, and we’re going to remain here,” Johnson said from their New Mexico home, which he described as a “nice place … smaller, a little more modest than being in Los Angeles, but meeting our needs.”