Industry insiders expect Apple will release three new iPhone models in 2018. According to TrendForce, two of the phones will be higher end AMOLED models while the other will be a lower end LCD alternative.

The AMOLED phones are rumored to be 5.8 and 6.5-inches, while the LCD model comes in at 6.1-inches – all models “will feature Face ID in lieu of a Home button,” says MacRumors.

Although last year’s 10th-anniversary iPhone lineup underperformed, an unusually high interest in earlier generations helped the sustain overall sales. TrendForce suggests roughly 216 million iPhones were sold in 2017 – about the same as in 2016.

It’s been reported that this latest crop of iPhones will be fully compatible with Apple Pencil – a strategic move that would undoubtedly lead to more sales of the accessory. That will also allow the iPhone to directly compete with the Samsung Galaxy Note 9. Industry analysts have long theorized that an upcoming iPhone model would support the stylus, however, many suspected it wouldn’t arrive until the 2019 lineup at the earliest. 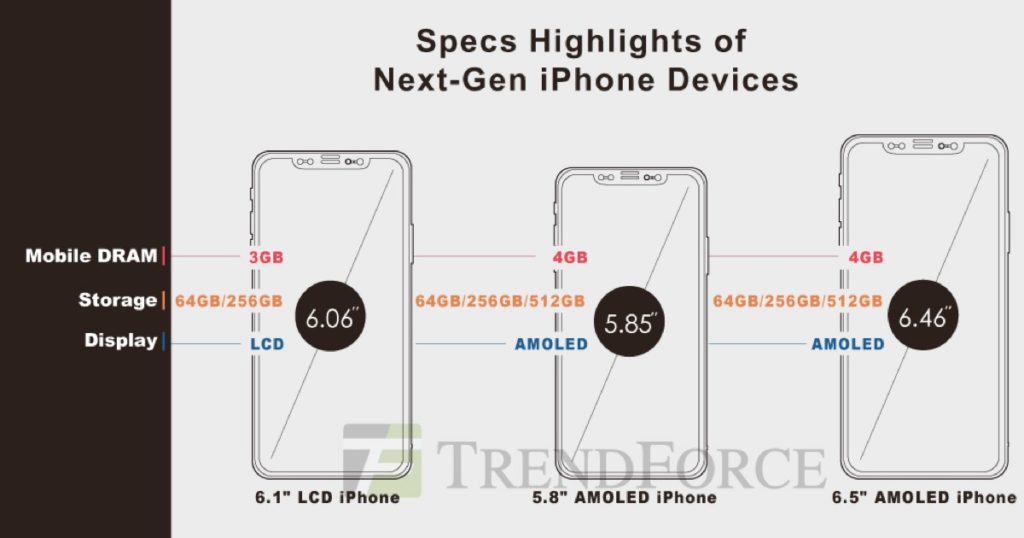 TreadForce is also reporting that Apple will unveil a new storage tier for the two higher-end devices. Reportedly, all three models will be available as 64GB and 256GB options, however, the pair of AMOLED devices will also feature a 512GB option. In addition, these two models will possess 4GB of DRAM while the LCD edition has 3GB.

When it comes to pricing, it’s yet been fully elucidated. Reports say Apple has been relentlessly negotiating with its suppliers in an effort to lower production costs. TreadForce says they estimate the starting price of the LCD version to be somewhere around the $699 – 749 mark, yet some insiders believe Apple may drop the price down as low as $600.

When it comes to the AMOLED models, the same TreadForce report implies a starting price of $899 – 949, however, again, some have noted the price could surpass four-figures as the Apple looks to replace the iPhone X – a model that’s set to enter its ‘end of life’ phase once the new models are released.