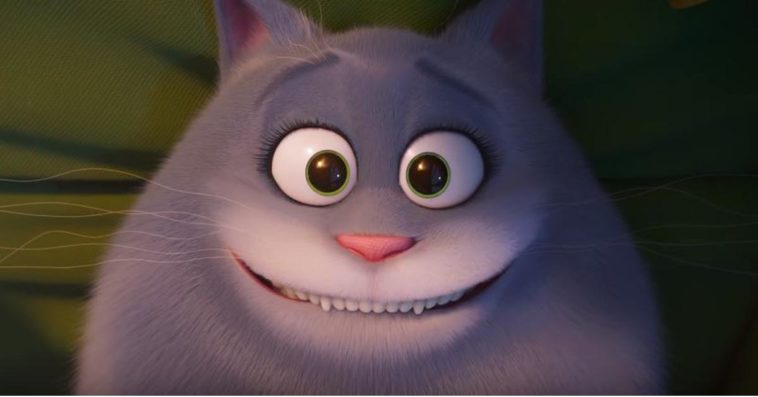 A few days after releasing the first character trailer for The Secret Life of Pets 2 earlier this month, Illumination dropped a new one that focuses on the film’s lazy yet adorable blue tabby cat Chloe (Lake Bell).

The minute-long video opens with the morbidly obese feline falling off the sofa and consequently cutting her sleep short much to her dismay. Chloe then goes straight to her owner’s (Laraine Newman) room and jumps up onto her bed to wake her up.

Chloe is being considerate at first so she tries to wake her human up by whispering a meow in her ear. When she doesn’t get any response, Chloe gets a little bit intense and starts stomping on her owner’s face — to no avail. But right after Chloe makes some puke noises, her owner immediately wakes up and tries to stop her from vomiting. Unfortunately, the pet owner is already too late as Chloe has already spewed a ball of clay-like matter from his mouth.

The Secret Life Of Pets 2 – The Chloe Trailer [HD]

The Secret Life Of Pets 2 – The Chloe Trailer In Theaters Summer 2019 http://www.thesecretlifeofpets.com/ The Secret Life of Pets 2 will follow summer 2016’s blockbuster about the lives our pets lead after we leave for work or school each day.

The trailer also features a conversation between Chloe and her Pomeranian friend Gidget (Jenny Slate), who seemingly needs to tell the cat something important. But before Gidget could reveal the purpose of her apparent visit, Chloe is distracted by the sound of her purr and starts to make some weird noises, putting Gidget’s patience to the test.

READ  An animated Super Mario Bros. movie could be in theaters by 2022

Directed by Chris Renaud, the sequel will continue to follow the secret lives of Max (Patton Oswalt) and his pet friends after their owners leave them for work or school each day. Aside from Bell, Newman, Slate, and Oswalt, the film also stars the voices of Eric Stonestreet, Kevin Hart, Ellie Kemper, Bobby Moynihan, Dana Carvey, Hannibal Buress, and Albert Brooks. New cast members include Tiffany Haddish, Nick Kroll, Pete Holmes, and Harrison Ford.