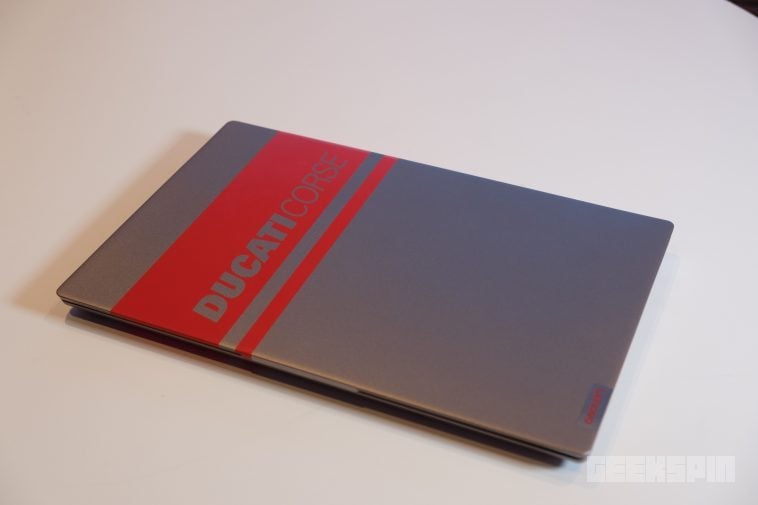 No stranger to each other, Lenovo and Ducati first started working together 2 years ago when Lenovo became Ducati’s key technology partner for the Ducati MotoGP racing team. And while the Lenovo logo has found its home on Ducati’s bikes, the Lenovo Ducati 5 laptop will be the first to utilize the Ducati logo and its design elements and construction principles both in its external and internal properties.

The Lenovo Ducati 5’s colors and initial design were inspired by the Panigale street bikes and are a combination of the classic Ducati racing stripe wrapped around a full gray body. The laptop’s air vents also inherit the honeycomb shape Ducati uses on their bikes’ exhausts instead of the usual circular shape found on most laptops. Lenovo also adapted Ducati’s use of negative space in designing the laptop by highlighting the metallic gray materials. Opening the laptop, you’ll find just a hint of that signature Ducati red, still mimicking racing stripes, on the power button and a metallic Lenovo log sitting on the side. Going around back again, near the honeycomb air vents, is the stamped unique serial number that uses the same typeface Ducati uses to mark its collector edition bike parts. Booting up the laptop will delight Ducati fans as the BIOS chime has been replaced with a sound of MotoGP riders racing around the circuit while the Ducati logo is proudly displayed on the screen.

The Lenovo Ducati 5 also comes in a decorative gift box that is identical to the laptop’s design. The Ducati logo is situated atop the racing stripe found on the box and comes with a special edition sleeve that features a special stitching pattern that matches the detailing on the seats of Ducati’s bikes.

Apart from its design, Lenovo pays tribute to Ducati bikes by creating a fast and powerful device that’s also slim and light. This premium 14-inch laptop houses an FHD IPS display with razor-thin bezels and it’s powered by a 10th Generation Intel Core i5. It houses Intel integrated graphics, 8GB of RAM, up to 1TB SSD for storage, and it ships with Windows 10. 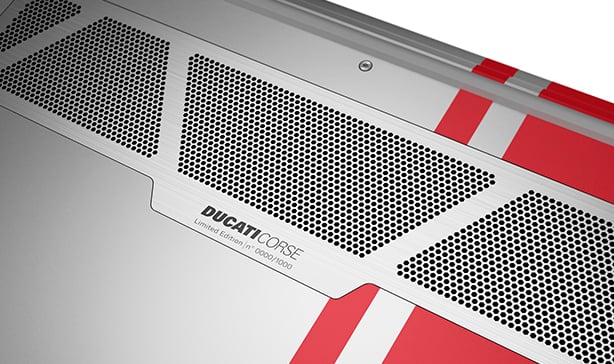 It also boasts of an impressive 12-hour battery life, a fingerprint sensor that is integrated into the power button, an HD webcam with built-in privacy shutter, and USB-C ports capable of transfer speeds of up to 10Gbps.

The Lenovo Ducati 5 limited edition laptop will only have 12,000 units available for sale and it’s priced starting at €899.99. It will be available starting April 2020, but there are no plans for it to be made available in the U.S.