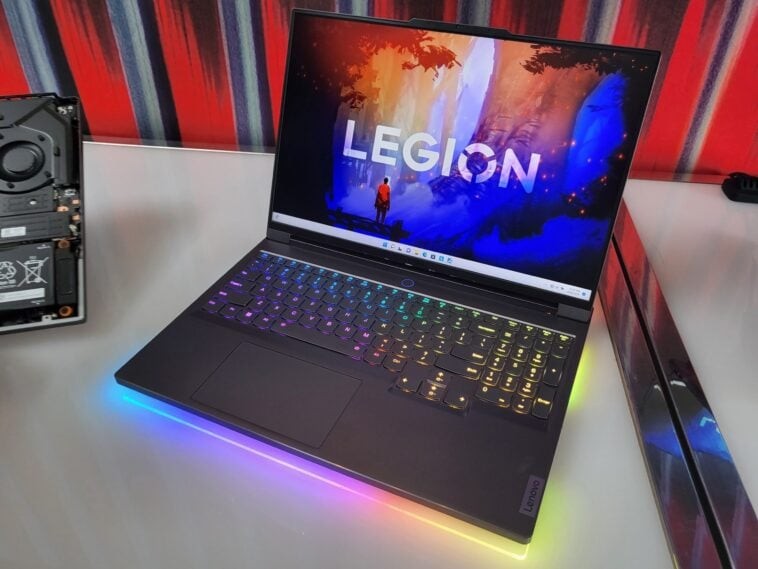 The Legion 7 and 7i are being called “portable powerhouses” by Lenovo, these flagship gaming laptops boast top-tier specs to provide the best gaming performance possible.

With Lenovo Legion A.I. Engine 2.0, the laptops are able to intelligently optimize, like predicting fan curves and balancing CPU and GPU resources in real-time, to provide consistent performance throughout game time.

Additionally, Lenovo Legion Coldfront 4.0 works to keep temperatures low with its vapor chamber technology and thus provide desktop-level performance without throttling, according to the company. Fan blades are also now 67% thinner which results in improved airflow.

Another notable feature of Lenovo’s latest is its 16-inch WQXGA display — also a world’s first. Offering a taller 16:10 aspect ratio, the display is bright and vibrant with a peak brightness of 1,250nits and full DCI-P3 color for true-to-life color.

Despite being incredibly powerful, the new Legion laptops are thinner-looking than the previous generation and weigh a respectable 2.5kg. For battery, this powerhouse is another world’s first by offering the largest battery available on a 16-inch laptop, and it’s supported by 135Whr Type-C fast charging.

At just 16mm thin, the latest additions to the Legion Slim line are also durable with its aluminum and magnesium aerospace-grade metal unibody casing while still maintaining the footprint of a 15-inch laptop.

For the Legion Slim 7i, Lenovo offers 4 display options including a 16-inch Mini-LED panel offering 165Hz and 3ms response time. The Slim 7, on the other hand, only offers IPS panels but the top-tier options come with variable refresh rates up to 240Hz. An IPS display with a variable 240Hz refresh rate is also available for the Slim 7i. Additionally, also have TUV Rheinland Gold Labe certification for eye protection on both devices.

Similar to its non-Slim siblings, the Legion Slim 7i is equipped with 12th Generation Intel Core chips while the Legion Slim 7 opts for AMD Ryzen (Up to Ryzen 9) instead. Storage options can go up to 2TB while RAM maxes out at 24GB.

For speakers, we have Harman speakers with Nahimic Audio. Additional features include a built-in FHD webcam with E-shutter, a 99.99Whr battery with Super Rapid Charge, and Killer Wi-Fi 6E, among others.

The first to hit the market will be the Lenovo Legion 7i and the Slim 7i which are slated to arrive this May. Prices for the Legion 7i start at $2,499 for the Intel-powered variant while the Slim 7i starts at $1,589 — also Intel-powered.

The Lenovo Legion 7 and Slim 7 AMD Advantage Edition with AMD Ryzen processors will arrive later this June with a starting price of $2,059 and $1,589 respectively.