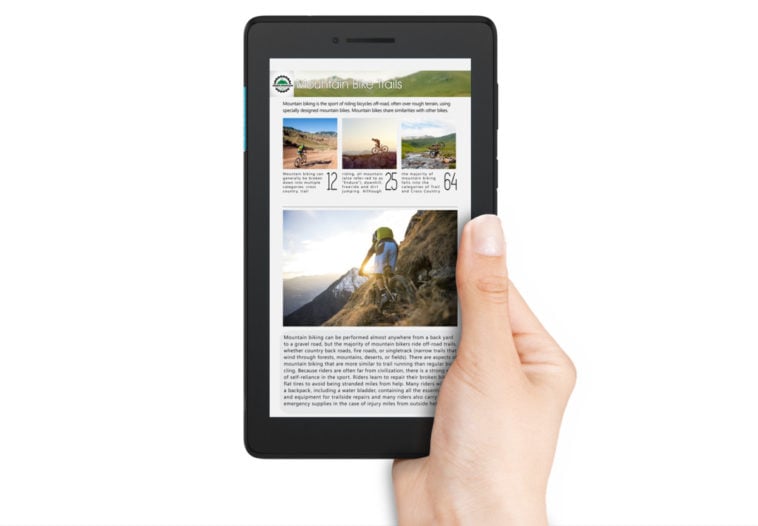 The tablet market has witnessed a steady sales decline in recent years. In a race to reverse this trend and wrestle market share away from reigning leaders, some makers such as Huawei, Amazon, and Lenovo have begun developing highly focalized products.

Today, Lenovo is announcing a new line of budget and premium tablets built to provide families with an in-home / on-the-go sharing and streaming device.

Starting at just $69.99, Lenovo’s Tab E7 is an entry-level tablet. Powered by Android Oreo Go Edition, the E7 is a simple, 7-inch device that’ll give users about 5 hours of video playback on a single charge.

Sources say both devices will come with up to 16GB of storage, however, the E8 maxes out at 1GB of RAM versus 2GB for the E10. Going further, the E8 also has a 1.3GHz MediaTek MT8163B processor compared to a Qualcomm Snapdragon 210 processor in the E10. Lenovo’s budget-friendly ‘E’ line will be in stores starting in October. The E8 and E10 cost $99.99 and $129.99, respectively.

For families seeking a more powerful device, the company has developed the M and P series. The M10 has a full HD 1920 x 1080 10-inch display, supports up to 32GB of storage and 3GB of RAM. A 1.8GHz Qualcomm Snapdragon 450 processor helps Android Oreo efficiently carry out its duties. The P10 has many of the same aforementioned features, however, it offers up to 4GB of RAM and has a better camera set up with 8MP rear and 5MP up front.

According to the press release, Lenovo expects to see families with kids naturally gravitate to one of the four higher-end devices. The company says whereas the E7 offers ‘barebone’ functionality, the E8, E10, M10, and P10 allow users to set up multiple profiles and easily toggle ’kid’s mode’. Lenovo calls said mode ‘Kid’s Pack’, a special mode “that features up-to-date and curated children’s content.”

We have not been able to confirm pricing with regard to the M10 and P10. The company says they’ll start taking preorders for these two devices sometime this winter.