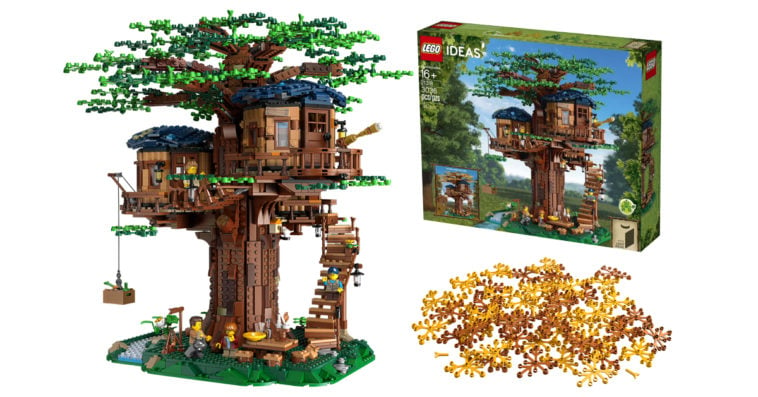 Since LEGO launched its first-ever plant-based polyethylene bricks last year, the toy manufacturer has increasingly included these sustainable bricks in its new building sets. And to show its commitment to achieving its ambitious target of making all LEGO elements from sustainable materials by 2030, LEGO has produced this LEGO Tree House set that contains the highest number of sustainable bricks ever in a LEGO set.

Based on a model submitted by French fan designer Kevin Feeser through the LEGO Ideas platform, this 3,036-piece Tree House set is a complex build intended for experienced LEGO builders. It features a landscape base, a tree with interchangeable sets of green leaves for summer and yellow and brown leaves for fall, and a three house with 3 cabins — main bedroom, bathroom, and kids’ room.

The landscape base comes with a buildable picnic table with 4 minifigure seats and assorted elements that enable builders to create a picnic and a buildable stream. The assorted elements also include a swing hanging from the tree, a bonfire, a hidden gem element, plant and bush elements, and a ladder to the cabin. 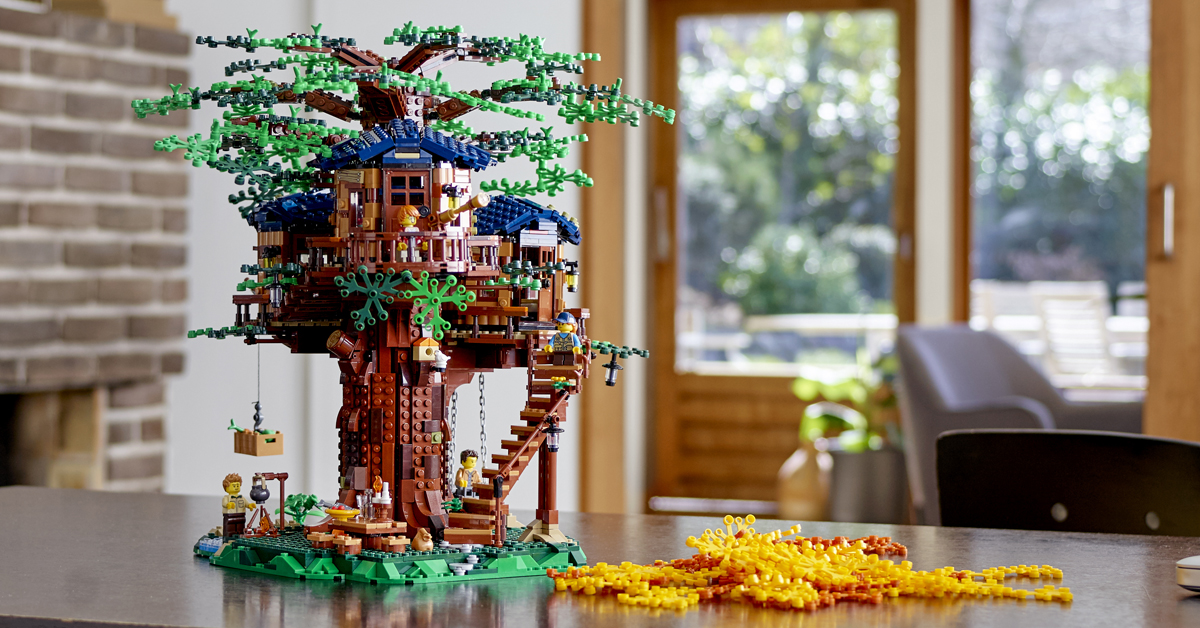 The tree foliage is composed of over 180 botanical elements made from plant-based polyethylene plastic using sustainably sourced sugarcane. All other plant elements surrounding the tree are also made from this plant-based plastic.

The main bedroom cabin is furnished with a buildable bed and assorted elements including a ship in a bottle, a compass, a clock, and hidden scissors, which is a fun nod to Feeser’s day job as a hairdresser. It also features a balcony with a hand-operated, wind-up crane for lifting up items to the cabin.

The bathroom has a buildable bathtub, toilet and sink, while the kids’ room features bunk beds and assorted elements such as a book and a treasure map. The roofs of the cabins, as well as the treetop, are all removable for easy access and play.

The set also includes 4 minifigures: mom, dad, and 2 children, plus a bird figure.

“When I first saw the model, I was blown away. Not only because it looks amazing, but also because it connects strongly to the very reason, we are investing so much time and effort in identifying new and sustainable materials, which is to preserve natural resources and fulfill our planet promise,” Tim Brooks, vice president for environmental responsibility at LEGO Group, said in a statement. “It really is an important step in our ambitious target of making all LEGO elements from sustainable materials.”

The LEGO Tree House set, priced at $199.99, will be available directly from LEGO retail stores and shop.LEGO.com for LEGO VIP members starting July 24th. The general public, on the other hand, can purchase the set beginning August 1st.