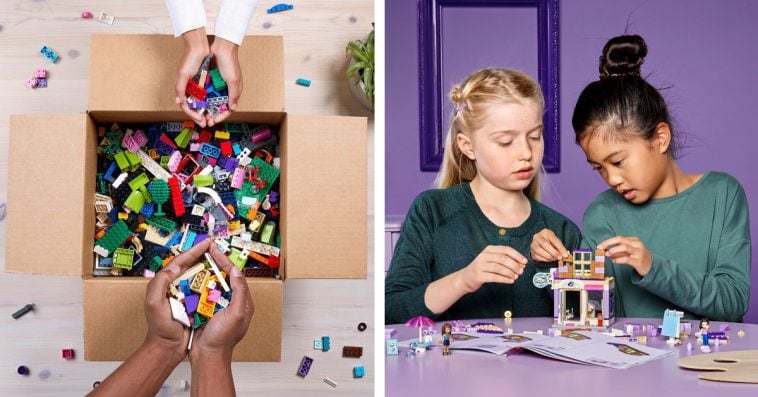 Do you have LEGO bricks that you don’t use anymore? If you do, then you may want to give them a new home and purpose by donating them to children’s non-profits across the country through LEGO’s newest pilot program called LEGO Replay.

The process is pretty simple. Collect any loose LEGO bricks, sets or elements, and place them into a cardboard box. Visit www.givebackbox.com/lego to print out a free UPS shipping label, pop the label on the box, and send it off. The package will be received by LEGO’s donation partner Give Back Box, which will sort, inspect, and clean the bricks before they are finally donated to either Teach For America or Boys & Girls Clubs of Boston.

“We know people don’t throw away their LEGO bricks,” said Tim Brooks, vice president of environmental responsibility at LEGO, in a statement. “The vast majority hand them down to their children or grandchildren. But others have asked us for a safe way to dispose of or to donate their bricks. With Replay, they have an easy option that’s both sustainable and socially impactful.”

Give Back Box founder Monika Wiela is excited to partner with LEGO in the pilot program because she knows exactly what it was like to grow up with only a few toys to play with.

“Growing up in Poland, I didn’t have many toys as a child, so this collaboration is rather personal for me,” Wiela shared. “What’s better than giving a child the gift of play? For us, the number of donations we receive is critical to a successful campaign, so we’ve made it as easy as possible for folks at home to send in their idle bricks.”

Teach For America will get the majority of the donations and will distribute them to thousands of classrooms across the country. Boys & Girls Clubs of Boston, meanwhile, will use the donated bricks for their after-school programs. Both non-profits can expect to receive the first shipments of pre-loved LEGO bricks in November.

While LEGO Replay is currently only available in the U.S., LEGO will evaluate a possible expansion of the program once its pilot is complete in spring 2020.