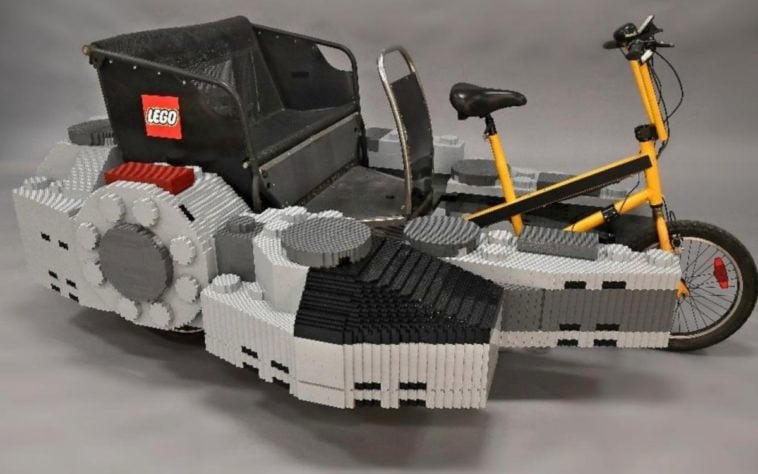 If you’re a fan of LEGO and a fan of Star Wars, then sit down before you read the following article. You’ve been warned. There is going to be an actual Millennium Falcon made out of LEGO bricks zooming around Manhattan tomorrow.

We are pretty sure fans of two iconic brands who are in Manhattan would have to travel the entire galaxy to hear better news than that.

As part of the celebrations for the new Han Solo movie and that May 4th thing (you know, that annoying joke you’re going to read fifteen times on Facebook today – ‘May the fourth be with you’), this first-of-its-kind Falcon will take flight around Bryant Park.

There will also be a Chewbacca meet and Greet, which we are equally excited about. We’ve been practicing our best Chewie roar all day in preparation for it… the neighbors aren’t happy.

Here is a little bit more info on LEGO’s first-ever rideable LEGO Millennium Falcon; it measures at nine feet long and six feet wide. It’s completely rideable, so a limited amount of fans will be able to hop aboard and grab a photo with Han Solo’s co-pilot, Chewbacca.

It took an amazing 396 hours of design and build time and made from 20,300 bricks. It is also a completely one-of-a-kind pedicab, so if you’re in the area, don’t miss your chance to give it a go.

If you’re not, you’ll be able to follow its exploits by using the social media hashtag #LEGOStarWars and #RoarForChange.

The #RoarForChange tag is being used to drive charitable donations. Roar for Change is a global challenge from Lucas film and Star Wars: Force for Change that supports UNICEF’s lifesaving work for children around the world.

WHERE: First come-first served rides will take-off and drop-off on 6th Avenue between 40th Street and 41st Street, looping around Bryant Park