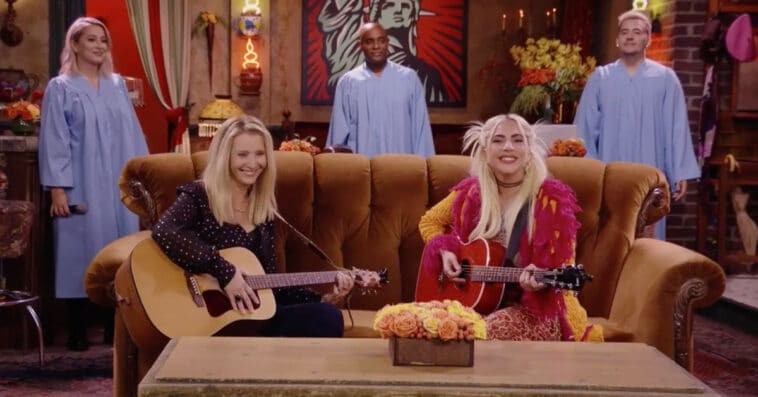 The much-awaited Friends: The Reunion finally arrived on HBO Max on Thursday, and while it’s packed with lots of amazing moments, fans of Phoebe Buffay were particularly thrilled with the segment where Lisa Kudrow was joined by Lady Gaga to perform the sitcom’s iconic song, Smelly Cat.

At one point during the special, Kudrow is singing Smelly Cat on the sitcom’s Central Perk set when Gaga suddenly enters the room and joins her to perform the song. The two are eventually joined by a gospel choir that takes the song to the next level.

After the jam session, Gaga gives a brief yet heartfelt message to Kudrow, telling her, “Thank you so much for being the person for all of us on Friends that was… I don’t know if this is the right way to say it, but the different one, or the one that was really herself.”

Kudrow replies, “Thank you, and thanks for carrying it along.”

Though Gaga was announced as one of the guest stars of the reunion special weeks before its premiere, several fans never expected to see her perform a duet of Smelly Cat with Kudrow.

We just screamed at the Smelly Cat guest

This friends reunion IS BLOWING MY MIND they really brought Lady Gaga to sing smelly cat??

GAH! The @FriendsTV Reunion was the perfect gift to the fans. I loved it. And when Mother Monster herself said “mind if I take Smelly Cat for a spin” and then just did her @ladygaga thing, I died a little (ok a lot) ? #FriendsReunion #SmellyCat

A lot of fans loved the moment between Kudrow and Gaga so much that it easily became the highlight of their week. Some viewers, meanwhile, were just glad they’re still alive to witness the rare collab.

Nothing’s going to top that this week. ? pic.twitter.com/ri1zHrWH5R

@ladygaga dressed as Phoebe singing smelly cat in Central Perk is THE highlight of my week. #FriendsReunion

DID NOT KNOW THAT LADY GAGA AND LISA KUDROW SINGING SMELLY CAT WAS WHAT I NEEDED BUT IT WAS AND I AM HAPPY TO BE ALIVE NOW pic.twitter.com/xNTnt8flRj

Gaga and Phoebe together performing Smelly Cat!!!! So sweet and such a cute interaction ? 2 women who were never afraid to be anything but themselves and have always been celebrated for that ? #FriendsReunion

Apparently, after watching Kudrow and Gaga’s performance, a number of fans think that it’s about time that Smelly Cat gets an official release.

Smelly Cat by Lisa Kudrow ft. Lady Gaga has now spent 100 weeks at #1 on the Hot 100. It's the first song in history to do so. #FriendsReunion pic.twitter.com/LllUzfqIX4

In an interview with Variety, Ben Winston, who directed and produced the reunion, revealed that Gaga was immediately on board with performing Smelly Cat for the special.

“I said to Lisa, ‘Would you be prepared to sing it?’ And she was like, ‘Yeah, that would be fun.’ We went through a few names, and we both agreed that Gaga, if we could get her, would be the ultimate one because she associates with and feels close to Phoebe in so many ways, as Gaga says on the show. That was a really beautiful moment. And Lady Gaga jumped at the chance to do it. We sat there with the two guitars with Lisa and her and worked it out there and then.”