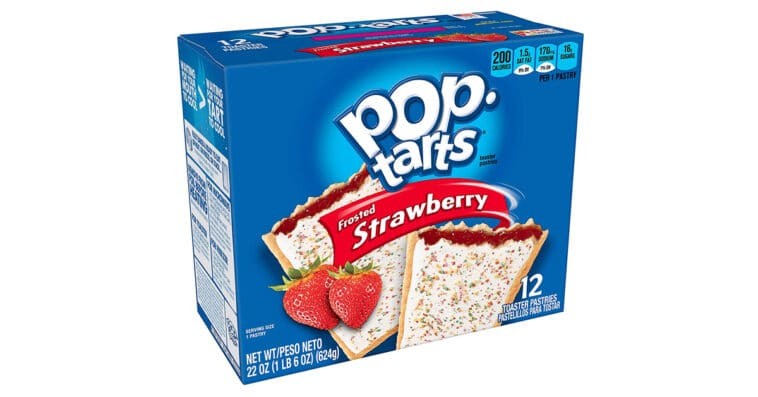 A customer has filed a class-action lawsuit against Kellogg’s for allegedly masquerading its strawberry-flavored Pop-Tarts as a health food.

Filed by Anita Harris in the Southern District of Illinois last August, the lawsuit claims that the label and marketing of Kellogg’s Strawberry Pop-Tarts are “misleading because they give people the impression [that] the [product’s] fruit filling contains a greater relative and absolute amount of strawberries than it does.”

The lawsuit, which is seeking at least $5 million, also alleges that the product’s name “Frosted Strawberry Toaster Pastries” is “false, misleading, and deceptive” because the Pop-Tart filling contains a “relatively significant amount of non-strawberry fruit ingredients” including pears and apples.

According to the lawsuit, Harris was expecting a “true strawberry taste” from the Pop-Tarts, but it’s something she “failed to receive, due to the relatively greater amount of pears and apples” in the product. The lawsuit also claims that the red food coloring gives consumers “the false impression” that the pastries contain more strawberries. The lawsuit notes that if Harris had known the truth, she would not have bought the Pop-Tarts.

While the content of Kellogg’s Strawberry Pop-Tarts is detailed on its ingredients list found on one side of its packaging, the lawsuit says “whether a toaster pastry contains only strawberries or merely some strawberries” should be answered on the product’s “front label,” which “consumers rely on when making quick decisions at the grocery store.”

The lawsuit goes on to compare Kellogg’s Strawberry Pop-Tarts to similar toaster pastries from other brands like Walmart’s Great Value and Dollar Tree’s Clover Valley. The lawsuit points out that the rival brands use the phrase “Naturally & Artificially Flavored” on their respective boxes to tip off customers that their products have less strawberry ingredients than consumers might expect. Kellogg’s, however, does not put that description on its Pop-Tart boxes.

To further support its claims, the lawsuit cites the Illinois Consumer Fraud and Deceptive Business Practices Act, which says deceptive acts such as “false pretense, false promise, misrepresentation or the concealment, suppression or omission of any material fact” is unlawful. “Consumers seeing defendant’s Product, which exclusively promotes strawberries, and the more ‘restrained’ or truthful labeling of competitors, will purchase defendant’s Product,” reads a portion of the lawsuit.

Though some people might find the lawsuit silly, Edgar Dworsky, a consumer lawyer and founder and editor of Consumer World, suggests that the plaintiff probably has a legal argument.

“Food product labeling cases are hot now,” Dworsky told CNN. “Various lawsuits recently have claimed that there is no real tuna in Subway tuna fish, that Honey Bunches of Oats is almost devoid of honey, and that Morning Star Farms Veggie Hot Dogs have almost no vegetables. How they ultimately turn out is a toss of a coin.”

But when asked if he thinks Harris will win the lawsuit, Dworsky said, “I don’t have a great sense that the Pop-Tarts case will succeed.”