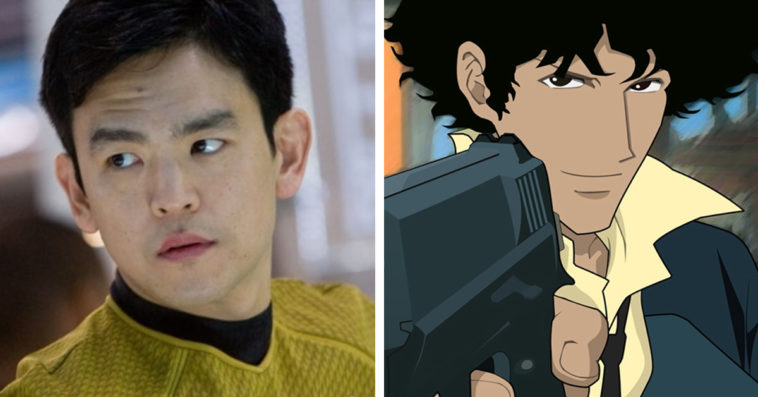 Netflix has found the lead actor of its upcoming live-action adaptation of Cowboy Bebop.

John Cho, who is best known for his role as Hikaru Sulu in the Star Trek reboot film series, has been cast in the role of Spike Spiegel on the streaming service’s take on the Japanese space western anime that follows a crew of cowboy bounty hunters travelling in a ship called Bebop.

Netflix describes Cho’s Spike Spiegel as “an impossibly cool cowboy (bounty hunter) with a deadly smile, a wry wit and style to spare. He travels the solar system with his ex-cop partner, Jet Black, pursuing the future’s most dangerous bounties with a combination of charm, charisma — and deadly Jeet Kune Do.”

Jet Black will be played by Mustafa Shakir, who recently appeared as Big Mike on HBO’s The Deuce and as John “Bushmaster” McIver on Netflix’s Luke Cage. Jet is described by the streaming service as “one of the few honest cops in the solar system before an ultimate betrayal robbed him of all that he loved, forcing him into a vagabond life of hunting bounties to put food on the table. Jet is an inveterate jazz enthusiast and captain of the Bebop.”

COWBOY BEBOP!!! I only had to be silent about it for half a century! ? taking that space time continuum thing a lil far…I suppose it’s all relative? Ayoooo!!! I get to play JET BLACK captain of the Bebop. A futuristic bounty hunter from outer space. Spot the fuck on. Full Stop. I am so delighted to work with these guys. Cast is dreamy. Jazz, justifiable violence, space, worm holes, and multiculturalism, my type of party. Let’s JAM!!!!! My team is beyond amazing to be honest. @robynlb129 ❤️?? I mean beyond amazing. Thanks guys!! #mewe #netflix #newshit #cowboybebop #netflix #thesearethevoyagesofthestarshipbebop #jetblack #bountyhunters #future #actor #mustafashakir #mustafaeffortless #chameleon42 #ftpbtp #letsjam #grateful

Pineda will portray Faye Valentine, a bold, brash, and unpredictable bounty hunter who suffers from amnesia after years of being cryogenically frozen. Despite her troubled past, she’s willing to do anything to survive, be it lying, stealing, or just being a thorn in Spike and Jet’s side.

Hassell, on the other hand, will appear as Vicious, Spiegel’s ex-partner who is now out to kill him. Described as a man who thoroughly enjoys a good kill, Vicious is the Syndicate’s most notorious hitman.

The character of Radical Ed will also be part of the series, but the casting process for that role is still ongoing.

Picked up for 10 episodes back in November, Netflix’s Cowboy Bebop is described as “the jazz-inspired, genre-bending story of Spike Spiegel, Jet Black, Faye Valentine, and Radical Ed, a rag-tag crew of bounty hunters on the run from their pasts as they hunt down the solar system’s most dangerous criminals.”

The first episode of the series will be penned by Thor: Ragnarok writer Christopher Yost, who will also serve as an executive producer. Alex Garcia Lopez, who has helmed episodes of Daredevil, Luke Cage and Cloak and Dagger, will direct the first two installments of the series, while Shinichiro Watanabe, director of the original anime, will serve as a consultant on the project.