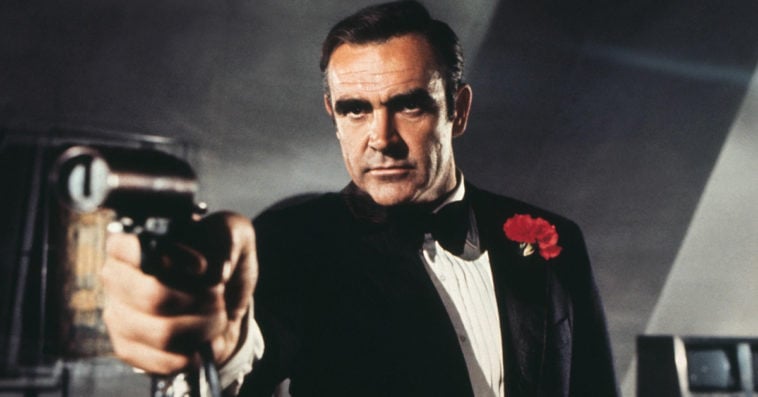 Sean Connery, best known as the first actor to play the British secret agent James Bond in film, has passed away. He was 90.

Connery’s death was confirmed by his family, who said that the Scottish actor “died peacefully in his sleep” on October 31st at his home in the Lyford Cay community of Nassau in the Bahamas. Although the cause of Connery’s death was not immediately disclosed, his son with his first wife Diane Cilento, actor Jason Connery, stated that the movie legend “had been unwell for some time.” A day after Connery’s death, his second wife Micheline Roquebrune said that he was suffering from dementia in his final years.

Connery originated the role of James Bond in Dr. No (1962), and continued to play the part in sequels From Russia With Love (1963), Goldfinger (1964), Thunderball (1965), and You Only Live Twice (1967).  After You Only Live Twice, Connery left the Bond franchise, only to be coaxed back for 1971’s Diamonds Are Forever. He left the franchise for the second time after Diamonds Are Forever but returned to the role one last time in in 1983 for Never Say Never Again. The first six films were produced by Eon Productions, while the last one was produced by Jack Schwartzman.

In a statement following the news of Connery’s death, Bond producers Michael G. Wilson and Barbara Broccoli said the actor “was and shall always be remembered as the original James Bond whose indelible entrance into cinema history began when he announced those unforgettable words, ‘The name’s Bond… James Bond.’”

The producers added: “He revolutionized the world with his gritty and witty portrayal of the sexy and charismatic secret agent. He is undoubtedly largely responsible for the success of the film series and we shall be forever grateful to him.”

Born of Irish ancestry in the slums of Edinburgh on August 25th 1930, Connery left school and worked as an unskilled laborer because of poverty. He was drafted into the Royal Navy at the age of 17, but was discharged three years later due to a serious case of ulcers. When he returned to Edinburgh, he took up bodybuilding and placed third in the 1950 Mr. Universe competition.

His amazing physique and good looks were his main assets when he started modeling and picking up acting jobs in London. His first film was No Road Back, a B crime movie in 1957. Four years later, he landed the role of Count Alexis Vronsky in the BBC America TV Movie Anna Karenina, which led to his casting as James Bond without a screen test.

Though his initial efforts to break out of the James Bond mold had not been easy, Connery eventually proved his versatility as an actor in movies such as The Wind and the Lion (1975), The Man Who Would Be King (1975), The Untouchables (1987), and Indiana Jones and the Last Crusade (1989). His performance as Jim Malone in The Untouchables earned him an Oscar and a Golden Globe.

Connery announced his retirement in 2005, two years after his last acting role in Stephen Norrington’s The League of Extraordinary Gentleman (2003).

Connery is survived by Micheline, his son Jason, and a grandson from Jason’s marriage to actress Mia Sara.