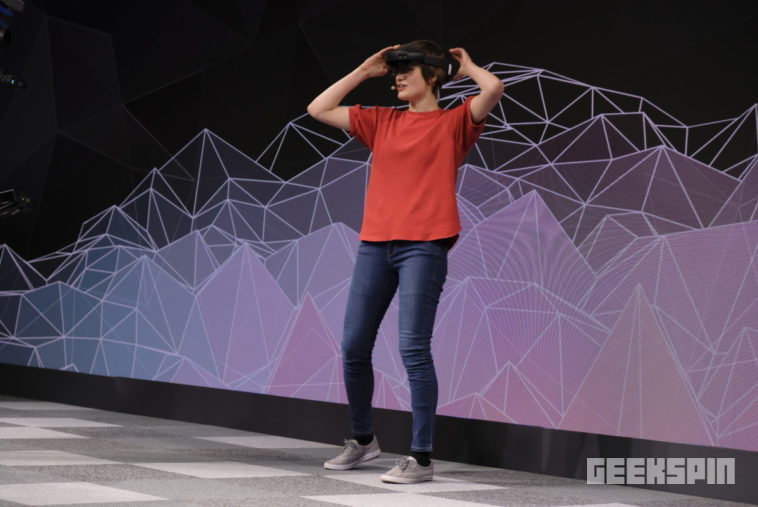 The original HoloLens might have seemed like a fun experiment, but the HoloLens 2 that Microsoft just announced at Mobile World Congress has the potential to change the world as we know it.

The new HoloLens 2 combines hands, eyes, and voice to make the mixed reality experience more natural, instinctual and human. That includes incorporating voice and eye tracking. To that effect, you can now interact with an object and it will even respond with haptic feedback. Yes, you heard that right – the holograms you see through the HoloLens are able to react when you touch them.

Microsoft’s CEO, Satya Nadella, started off the event talking about how Microsoft wants corporations not to be dependent on Microsoft, but to become independent with Microsoft. We weren’t sure at first where he was headed with that, but it quickly became clear that the HoloLens 2 is primarily focused on enterprises.

The HoloLens 2 can be used to assist physicians with surgery and medical treatments, or it can be used for telepresence – to bring co-workers together virtually into the same room, and those examples are just the tip of the iceberg. What’s especially exciting about these scenarios is that Microsoft already has an extensive list of partners who are currently using and working on customizing the HoloLens 2 for their company. And that’s just it – the HoloLens 2 can actually be customized, making it that much more useful and valuable for each business.

One of the first partners to take advantage of the HoloLens customization program is Trimble with their XR10. They have created a version of the HoloLens 2 that is also a construction helmet. The helmet is being used to view 3D models against actual visual structures so that architects can find issues early before the installation teams arrive on site and get to work. In one such scenario, architects were able to catch an issue before any physical construction had started. This saved the company a week’s worth of delays. The Trimble XR10 helmet will be available to purchase at the same time as the HoloLens 2.

Spatial is another company that has already started working with the HoloLens 2 to incorporate their telepresence technology. To that effect, Spatial has been making it possible for Mattel’s employees to collaborate with each other through telepresence and the HoloLens 2. The demo we saw on stage brought together a remote employee with a Mattel employee on stage, as they interacted with each other, and holographic objects, in a virtual war room where they were discussing toy ideas. The remote employee came through as a 3D avatar. He was able to walk around the room freely and interact with objects. Not only is this next-level in telepresence convenient and extremely interactive, but it will also help save businesses money by reducing their travel costs.

Fortnite could be coming to HoloLens

That’s not to say that HoloLens 2 won’t be useful to consumers. Epic Games came on stage to say that they will support the HoloLens 2, starting with the Unreal Engine and that in years to come, Epic Games will support HoloLens “in all of its endeavors”. If you can read between the lines, it certainly sounds like there’s potential for Fortnite to come to the HoloLens, and that’s a serious game-changer. Pun intended.

Furthermore, Microsoft says that the platform will be an Open Platform. Already, Firefox has signed on to offer a native web browsing experience on HoloLens 2.

And imagine a world where you can share your HoloLens creations? By combining HoloLens and Azure Spacial Anchors, Microsoft is enabling the birth of the internet of holograms.

On the hardware front, the new HoloLens 2 has been vastly improved. Its field of view has been increased by more than 2X, that is the equivalent of moving from a single 1080P display to having a 2K display for each of your eyes.

The headset is now a lot more comfortable to wear too. They’ve managed to reduce the weight by making the front enclosure entirely out of carbon fiber. Microsoft says that they have more than tripled the comfort of the device and that it will feel as if the device is floating on your head.

We haven’t tried the HoloLens 2 yet out ourselves, but we hope to catch a demo at the show this week.

The pre-order bundles for the HoloLens 2 start at $125 per month. A standalone Enterprise Edition will retail for $3500, which is significantly cheaper than its predecessor. It will ship later this year.