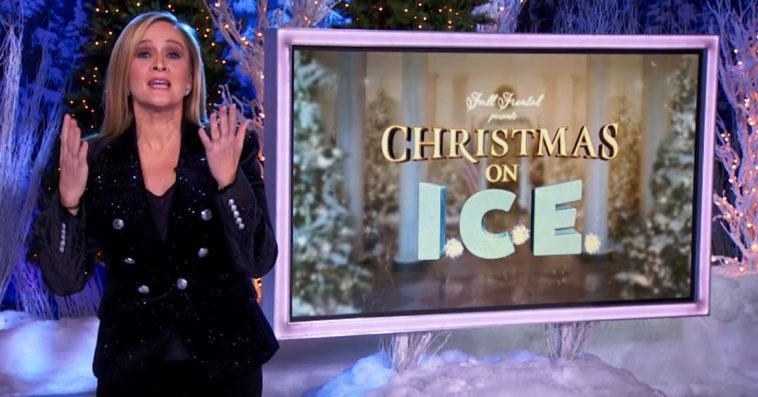 Cleverly titled as Christmas on I.C.E., the holiday special reminded the viewers about the administration’s “zero tolerance” policy on immigration and shared how they can make a difference in the lives of the detained immigrants and their families. Bee said that the special, in a nutshell, is “the only guide to fighting the excesses of Immigration and Customs Enforcement (I.C.E.) that’s also an ice show.”

In one of the skits included in the special, Bee and figure skating Olympian Adam Rippon gave the audience a play-by-play commentary on how to resist I.C.E. while “Abolish I.C.E.” skaters showed some of the legal ways viewers can help their friends and neighbors deal with I.C.E.  These ways include publicizing I.C.E. activities on social media, organizing one’s community not to cooperate with I.C.E., and supporting and electing officials who plan to abolish I.C.E.

In an interview with The Hollywood Reporter, Bee said that coming up with this year’s Christmas special wasn’t that hard for her and her team. “We’ve covered I.C.E. before on the show, so we didn’t have to look too hard for what we wanted to talk about in the special,” said the 49-year-old host. “The story of the migrant children and family separations is something that captivated us and got our attention. And we’ve never forgotten it. We’ve never let it go from our minds. It’s not like we can do every episode of the show about it, but this is a good way to end the year — to remind people about the situation and to raise money.”

A portion of the earnings from merchandise and ticket sales during the Monday taping at New York’s PlayStation Theater went to KIND’s (Kids in Need of Defense) Family Separation Response Team, an organization providing aid to the immigrant children and adults separated under Trump’s immigration policy.

Full Frontal with Samantha Bee also donated a six-bedroom house to a similar organization named El Refugio. The house will be used by visiting families and lawyers of immigrants detained at Stewart Detention Center, located in the remote town of Lumpkin, Georgia. The show made the generous donation after learning that the only local lodging available in the town for years was a tiny rental house operated by El Refugio.

While Bee doesn’t expect to fix the administration’s “cruel” immigration policy with just the holiday special, she thinks that the episode will make viewers more “aware and attuned to the misery and the cruelty” with which the administration is approaching the problem.