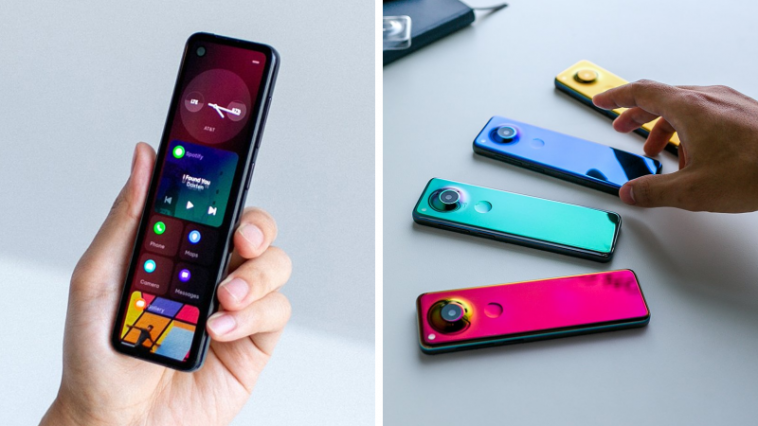 With the exception of foldable phones, phone designs these days have generally settled into a typical candy bar mold. But a surprising photo was tweeted yesterday by Android Co-founder and Essential CEO, Andy Rubin, showing a baffling new design of what seemed to be a really long and thin rectangular smartphone.

The Verge later reported that an Essential spokesperson had told them that the brand is indeed working on a new product, saying:

“We’ve been working on a new device that’s now in early testing with our team outside the lab. We look forward to sharing more in the near future.”

The tweeted photo showed four phones, that, according to Rubin, boast of a “radically different form factor”. They’re undoubtedly very eye-catching with their elongated form factor and bright color finishes. In another photo, you can see that the U.I. seems to be composed of card-like apps or widgets that you scroll through. Looking closer at its physical build, there are large buttons resting on the right side of the phone, while a camera and fingerprint sensor are visible on the rear.

Rubin has also showcased the GEM colorshift material of the phone in a short video. To that effect, the phones’ iridescent colors change when viewed at different angles. Rubin could also be hinting at the name of the phone, GEM. A recently leaked code spotted by XDA-Developers, as well as a trademark application by Essential also supports this theory.

In addition to its unusual name, XDA-Developers also found that tapping on the fingerprint sensor at the back activates the phone’s voice assistant and that the device may also feature a “fingerprint walkie talkie mode”. The phone may possibly run Android with a Qualcomm Snapdragon 730 processor to power it, which would place it as a midrange performer instead of a flagship.

This design does make sense since Rubin has previously suggested that a phone with a small screen paired with a UI that responded mostly to voice commands could be a way to curb phone addiction.

A couple of hours after Rubin’s tweets were posted, Essential themselves shared official photos of the phone in a tweet.

We've been working on a new device to reframe your perspective on mobile. It's now in early testing with our team outside the lab. Look forward to sharing more in the near future! #ProjectGEM pic.twitter.com/BnVy7yM2Kj

Last December, the Essential phone was effectively discontinued so it looks like Project Gem will be the start of an entire new series for the brand.