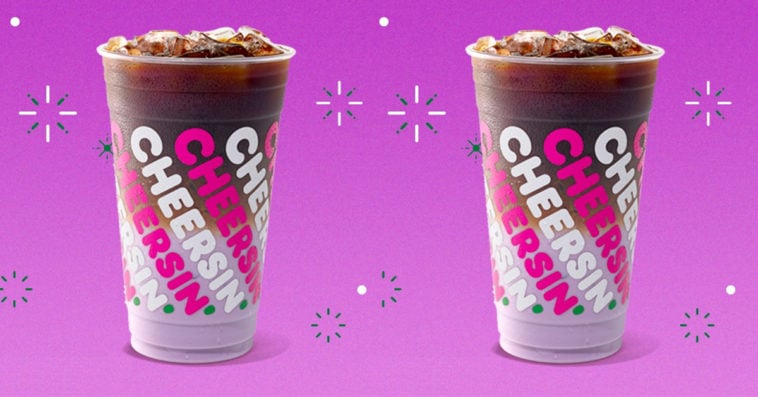 Though sugarplums are usually associated with the holiday season, a lot of people don’t know what they actually taste like. So, in an effort to bring the fabled holiday flavor to coffee lovers across the U.S., Dunkin’ has released the new Sugarplum Macchiato.

Available in hot, iced, and decaf, Dunkin’s Sugarplum Macchiato features bright berry flavors of blueberry, raspberry, blackberry, and plum, with notes of vanilla, espresso, and sweet sugary finish. The richness of the espresso and the sweetness of the berries create a very distinct taste when combined. The two flavors complement each other very well, with neither overpowering the other.

Dunkin’s Sugarplum Macchiato has a light purple color that makes it the most whimsical-looking drink in the company’s holiday coffee lineup. The quaint appearance of the beverage is achieved when Dunkin’s premium espresso, milk, and sugarplum flavor are all mixed together in a cup.

✨💜 The Sugarplum Macchiato is here! 💜✨ Invite your taste buds to a winter wonderland filled with bright berry flavors, vanilla notes & espresso, all topped off with a sweet sugary finish. ❄️ Grab one today & let us know how you’d describe it using #DunkinSugarplum pic.twitter.com/S26478E8xu

“Our Sugarplum Macchiato is a colorful twist on a well-known, but perhaps mysterious-tasting, flavor of holiday lore,” Jill Nelson ― vice president, marketing strategy at Dunkin ― said in a statement. “It’s the perfect complement to our fan-favorite holiday latte lineup and brings even more delicious cheer to the Dunkin’ menu.”

The idea for a sugarplum-flavored coffee first came up at Dunkin’ in late 2016 when its culinary team was brainstorming ideas themed around the famous holiday fairytale, The Nutcracker. After various takes on The Nutcracker-inspired drink, including a version that featured floral flavor notes, the team perfected the Sugarplum Macchiato with a frosted berry flavor that customers can now purchase at Dunkin’.

Though the limited-time Pink Velvet Macchiato, which debuted for Valentine’s Day earlier this year, was the first colored flavor swirl offered at Dunkin’ locations nationwide, the idea to add colored flavor swirls to the company’s menu first came up when the Sugarplum Macchiato was being developed.

The Sugarplum Macchiato is the latest addition to Dunkin’s 2020 holiday beverage lineup, which launched in November. The Christmas-themed menu includes traditional drinks such as a gingerbread latte and peppermint mocha.