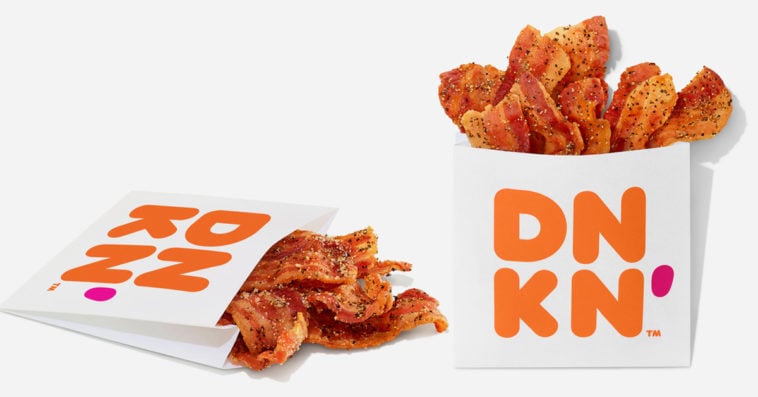 Snackin’ Bacon is made of high-end bacon that is smoked with natural cherrywood. It is also treated to a sweet and savory blend of brown sugar and black pepper seasoning, creating caramelized meat strips that Dunkin’ fans know and love from the chain’s Sweet Black Pepper Bacon Breakfast Sandwich.

Each order of Snackin’ Bacon comes with eight half-strips of bacon. Served in a portable sleeve, this meaty snack can be enjoyed while on the go. Though it’s also ideal for breakfast, Dunkin’ is promoting it as an afternoon snack. “Here at Dunkin’, we’ve been working hard to formulate the perfect afternoon pick-me-up and really, what’s better than a bag full of bacon?” Dunkin’ said in a blog post, introducing the new treat.

While Snackin’ Bacon can be eaten straight up, its sweet candied flavor makes it a perfect partner to Dunkin’s caramel, French vanilla, and hazelnut flavor swirls.