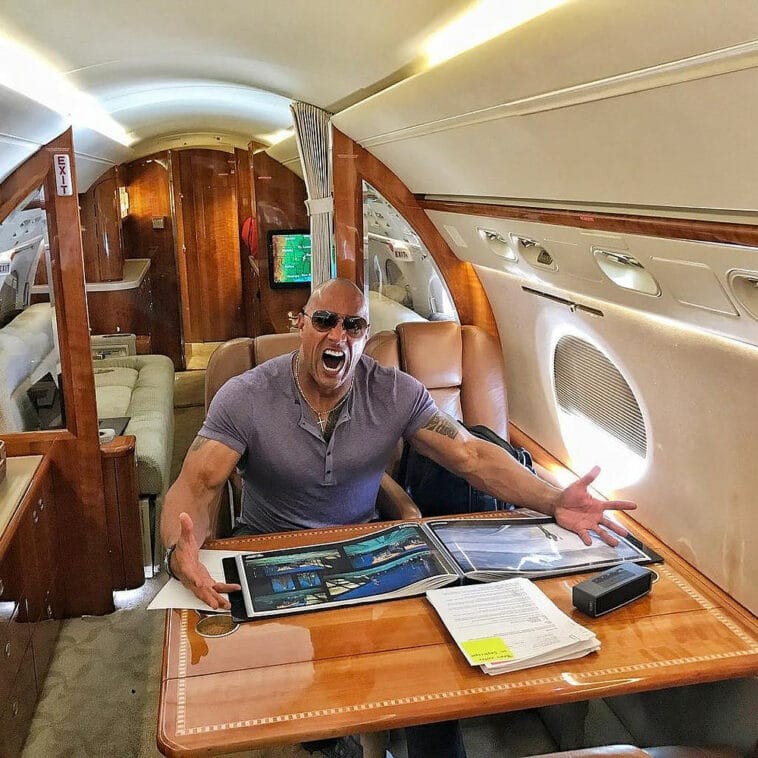 While most celebs fly first class whenever they travel, there are celebs who kick it up a notch by investing in their very own private jet; and it’s a splurge that’s totally worth it! Read on for a list of celebs who own private jets. And, please fasten your seatbelts, because we’re about to take off!

We all deserve to treat ourselves, and if you’re one of The Rock’s Instagram followers, you already know that this talented actor regularly treats himself to a full-fledged cheat day or two. Sure, he works out religiously, but he also makes sure that his sweet tooth gets some attention too. But aside from treating himself in the cookie and ice cream department, the Jumanji actor also knows how to splurge on the more luxurious things in life; like his private jet!

Another fun fact about this actor is that he used to have 7 dollars in his pocket during his early days in the wrestling industry. Now, he’s worth around $220 million. Thanks to this factor, he named his production company Seven Bucks. What can we say? This king totally deserves a private jet!

Tom Cruise has become iconic for many reasons, but the primary one is the Mission Impossible movie franchise. Purchased in 1998, this private jet reminds us of the actor’s role as Maverick. Yup, it seems that he truly has a penchant for aviation.

Named The Challenger, this lavish private jet was a Father’s Day gift from Beyonce to her beau, Jay-Z. With a seating capacity of up to 19 passengers and 2 bathrooms, the master rapper can easily take his family and closest friends on vacation with him.

As an unparalleled martial artist, skilled actor, and environmental advocate, Jackie Chan is a triple threat that no one dares to mess with! The legendary actor purchased his private jet, Legacy 650 for $30 million back in 2012. Come 2016, he added another one to his collection for his shorter travels, worth $20 million.

Hands up if you want to travel the world with Jackie Chan! We know we would like to; we might even pick up some Kung Fu skills on the way.

There’s no doubt about the fact that Jim Carrey is one of the greatest comedians of all time. From The Mask and Ace Ventura all the way to Yes Man, Fun with Dick and Jane, and Bruce Almighty, there isn’t a moment that this actor did not make us laugh. However, he’s also showcased his dramatic range movies like The Number 23 and Eternal Sunshine of the Spotless Mind.

He’s also the owner of a sophisticated private jet that he purchased for $59 million. When it isn’t in use, you can even rent the Gulfstream V for around $8,000 per hour!

The queen of talk shows isn’t just a talented and charitable soul with a great sense of humor. She’s also the proud owner of the Bombardier Global Express XRS.

Kylie Jenner’s private jet is pink, and we didn’t expect anything else from this cosmetic aficionado. Rumor has it that this jet is among her biggest spends during a shopping spree back in 2020. We wonder if Stormi has her own personalized baby seat inside?

This private jet was purchased from Microsoft co-founder, Paul Allen in 2011. What was previously a jetliner has been refurbished in order to accommodate 43 passengers, complete with lavatories and 24 karat gold fixtures. Its name, Trump Force One, was clearly derived from Air Force One. Weird foreshadowing? We think so.

Bill Gates is one of the world’s youngest self-made billionaires. He was only 31 years old when Microsoft took off and earned him and his co-founder, Paul Allen, a lot of income. Today, the multi-billionaire owns around 4 jets, and the Gulfstream G650ER, in particular, is worth a whopping $70 million.

John Travolta is not your typical private jet plane owner, and that’s because he has an entire fleet of planes, which he just casually parks his aircrafts in his mansion’s backyard. Owning a bunch of jet planes is pretty cool, so we think that Danny Zuko would approve!

Being one of the most proficient boxing champions on the planet isn’t all glitz and glamour. In fact, a lot of blood, sweat, and tears went into obtaining this aircraft. So, it completely makes sense that Floyd would want to relax in his very own private jet while he travels from one location to another for his fights.

Dan Blitzerian is a poker player, businessman, and social media influencer who seems to be living the rockstar life. Whenever he needs to jet off to Las Vegas or any other flashy destination, he never flies commercial. All he has to do is hop into his Gulfstream GI-V, sit back, relax, and take to the skies.

Cristiano Ronaldo is the most followed person on Instagram, and for good reason! He’s clearly one of the most legendary soccer players the world has ever seen, but people follow him for his good heart too.

The generous athlete is famous for his philanthropic efforts towards his multiple charity organizations. With all he does for others, we’re glad to see that he’s also splurging on himself; specifically with his purchase of a Gulfstream G650 jet worth $45 million.

There appears to be a common denominator among world-class footballers, and it isn’t their passion for sports that we’re talking about! Many of these soccer superstars own private jets! Neymar invested in his first private jet during his stay with Barcelona FC and PSG. Today, he owns 2 aircraft, a yacht, and a helicopter!

When you win the Formula One Championship 5 times, it’s only natural that you would want to invest in a few luxurious cars and a stunning private jet. Just like Lewis Hamilton, this Bombardier Challenger 605 is a true champion.

Mark Cuban is a stock market genius. He sold Broadcast.com to Yahoo for $5.7 billion, making it the company’s biggest acquisition yet. This prominent public figure also holds a Guinness World Record for the largest single e-commerce transaction in the world when he splurged on the Gulfstream V business jet, worth $40 million.

Steve Jobs is no longer with us, but while he was alive, he had a net worth of approximately $10 billion, so it’s no surprise that he owned a private jet

A wise man once said that time is gold, and there’s no denying that billionaire, Warren Buffet has applied this concept to his career. As the CEO of Berkshire Hathaway, travel is a constant part of his schedule. That’s why buying a Bombardier Challenger was definitely a good idea. With a net worth of over $84 billion, he could own an entire airport if he wanted to.

This royal is known as one of the richest investors in Saudi Arabia. With a net worth of over $15 billion, Prince Al-waleed Bin Talal knows where to put his money; in business, fun, and philanthropy.

Naturally, being such as busy personality goes hand in hand with travel, and when you’re a frequent flier, a private jet is definitely in order! Aside from owning an Airbus 321, this businessman also has a Hawker Siddeley 125 in his fleet.

To celebrate her 40th birthday, Kim Kardashian got herself a Boeing 777 to fly 40 of her closest friends to a private island in French Polynesia. 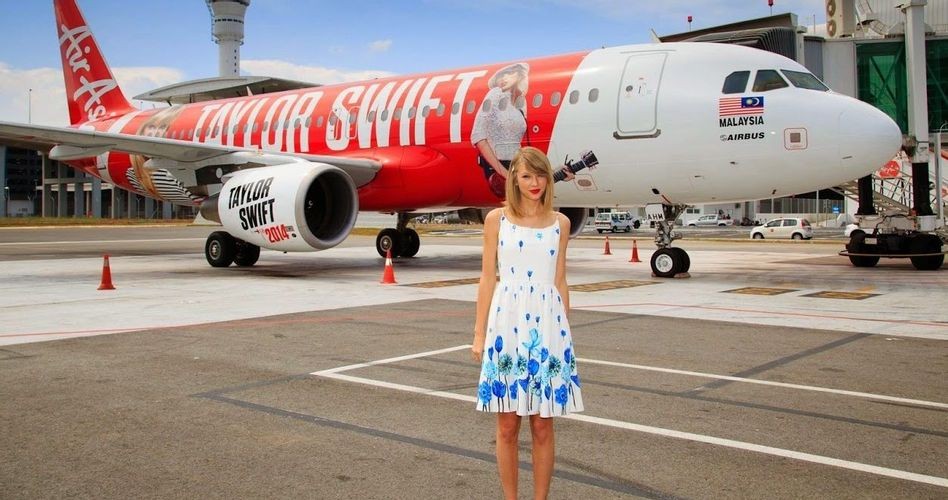 Taylor Swift owned 2 private jets; the Dassault-Breguet Mystere Falcon 900 and Dassault Falcon 50. The popstar even personalized the larger one with a huge number 13 on the front, her lucky number. The huge aircraft has space to accommodate 3 separate lounges, perfect for the “Love Story” singer’s long list of close friends.

Justin Bieber took to Instagram back in February 2020 to share a photo of his luxurious private jet. The aircraft is apparently large enough for his wife, Hailey, to recline while wrapped in a fluffy blanket as he polishes his hockey skills in the center aisle.

The year was 2012 when the “Born This Way” singer upgraded her mode of transportation with a Boeing 757. Estimated to be worth around $80 million, this flying luxury haven is home to a myriad of lavish amenities. What can we say? When a star is born, she shines high in the skies.

Flying can be tiring, especially when you have a little baby in tow. Luckily, Cardi B and her little one, Kulture, travel in style and with convenience thanks to their private jet.

J-Lo in the house (plane), and she’s all dolled up looking like a boss. We are huge fans of the exquisite white leather interior of her private jet, and we’re glad she decided to strike a pose in a matching color palette!

There isn’t enough room on commercial flights to hold the size of Mariah Carey’s whistle notes and vibratos. Perhaps that’s why the iconic diva prefers to fly privately in her very own jet!

We love the fact that Maluma gives his adorable grandparents a ride in his gorgeous private jet. The singer shared this endearing picture of him sandwiched between grandpa and grandma while they fly to Columbia. #Goals

The former Yankees player means business as he lounges in his private jet with some cool shades on. If you want to know just how private and personalized this aircraft is, just take a gander at the throw pillows that flaunt his signature logo.

The beautiful actress and former Miss Universe and her ex-fiance, Louis D’Esposito used to fly to multiple gorgeous destinations together. The proud beauty queen mama of 2 may be flying solo for now, but we’re sure she’ll find her king soon!

When you own a private jet, it’s practically your mobile home in the sky. We like how Chayanne applied that concept by looking cozy next to a pile of blankets and pillows while he smiles at his phone.