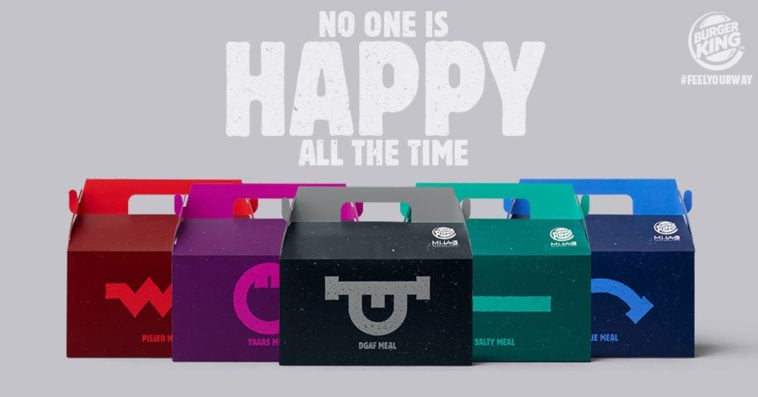 In observance of the Mental Health Awareness Month this May, Burger King has launched a limited edition range of meals called Real Meals, which aim to help people understand that “no one is happy all the time, and that’s OK.”

To support the launch of Real Meals, Burger King also dropped an ad on YouTube showing a montage of people in various non-happy emotional states. The video commercial replaces the fast food chain’s popular chorus from the 1970s, “Have it your way” with “Feel your way,” and features a piece of raw and genuine music that suits the campaign’s idea that people aren’t happy all the time.

While some have commended Burger King’s latest campaign for helping raise awareness around mental illnesses, others have blasted it for seemingly downplaying mental health issues and attempting to profit off the very sensitive subject.

Excuse me while I unload my feelings on this:

First, good on @BurgerKing for attempting to start a conversation about mental health… But…

Using “mental health awareness” as a gimmick to market food and get in a dig at @McDonalds seems incredibly un-“real”. (1/?) https://t.co/RpRC9j7kLa

Man, we can’t even be depressed without our pessimism being packaged up and sold to us.

Which kinda cycles back and both validates and perpetuates that feeling.

I'm so happy that Buger King cares enough about my mental health to use is as a way to advertise their burgers.

i won’t fall for your attempt to relate. big companies will never be relatable. down with the bourgeois.

There are also some people who have wondered whether Burger King is making monetary contributions to organizations that address the needs of people with mental illnesses. There are also a few who have challenged Burger King’s sincerity with its campaign by demanding the restaurant chain to increase the salary of its employees and hire more workers for healthier and happier store crew.

@BurgerKing Question, will Burger King be USING any of the REVENUE generated during May in it’s Mental Health Awareness Month #advertising to DONATE to ANY Mental Health Agency??

Cool. If you’re serious about mental health and well being you should pay your staff more and hire more workers for shifts so they aren’t overworked and stressed out.

When asked to respond to the criticisms towards Burger King’s mental health awareness campaign on social media, a rep for the restaurant chain said that the company wasn’t giving interviews about its Real Meals. The spokeswoman, on the other hand, pointed out that Burger King is donating an undisclosed amount to Mental Health America, which the company partnered with for the campaign.

While Burger King’s latest campaign has definitely opened conversations about mental health issues, marketing experts said the fast food chain needs to prove to the public that it has a genuine concern about the topic.

“If the issue is important to the company, you’ll see that company staying with this issue,” Alexander Chernev, a marketing professor at the Kellogg School of Management at Northwestern University.

Ari Lightman, a professor of digital media and marketing at Carnegie Mellon’s Heinz College of Information Systems and Public Policy, added that if Burger King won’t do any additional actions to stand by the cause, their interest could be viewed as shallow. “If the general public finds out that your actions don’t coincide with your messaging, then that can be potentially very damaging for a company,” he said.