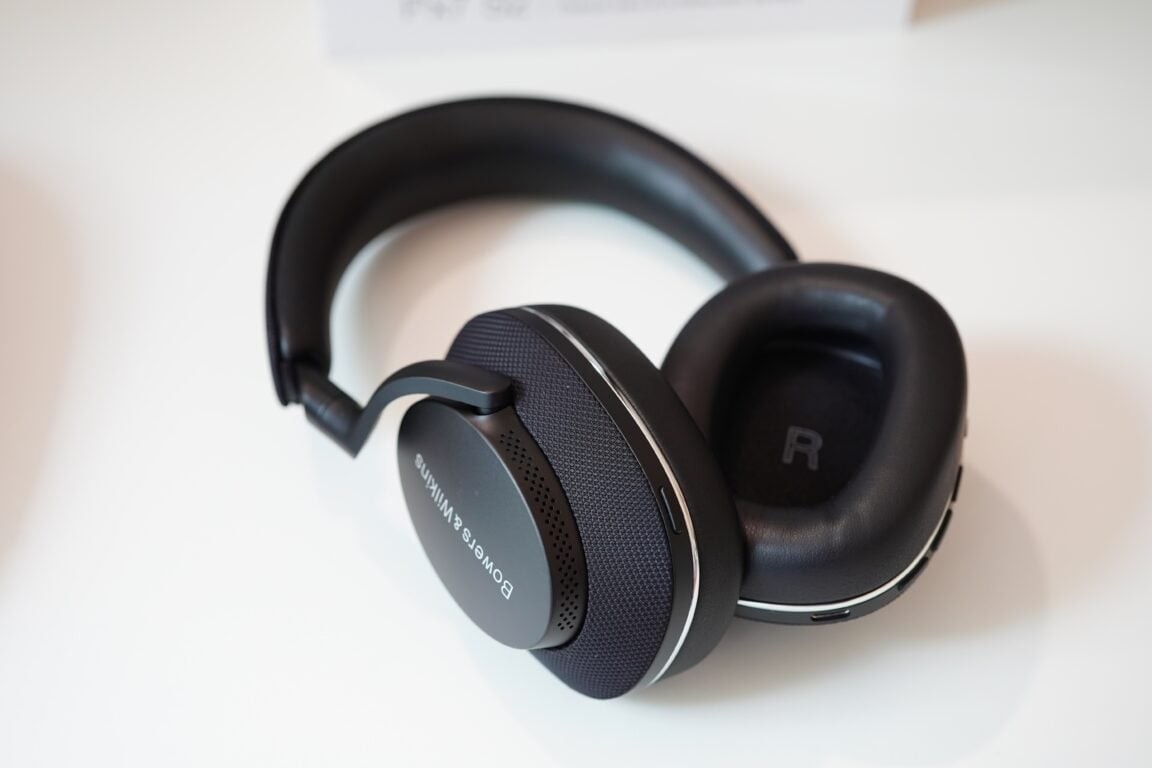 Bowers & Wilkins Px7 S2
Bowers & Wilkins Px7 S2 review
Bottom Line
Bowers & Wilkins PX7 S2 are luxurious headphones that offer great sound, comfort, battery life, and ANC, but they lack many features for such a high price tag.
Pros
Beautiful luxurious design
Extremely comfortable and well padded
Very good ANC
Nice carrying case included
Sound great
Useful On/off slider
Cons
They don’t fold for portability
The auto-wear sensor is buggy
The app opens every time the headphones are turned on
Buttons are not so intuitive to use while listening
Wearing glasses lets a lot of noise past the ANC
Needs the power to listen with a cable
4
Buy from AmazonBuy from Best Buy

Bowers & Wilkins has released their answer to Sony and Bose’s premium over-ear noise-canceling headphones; the Px7 S2. And they might just be the best-looking of the bunch.

These Bluetooth over-ears feature competitive noise canceling technology, large 40mm drivers with ultra cushy ear cups, a 30-hour battery, and the type of sound quality you can count on Bowers & Wilkins for.

Our Bowers & Wilkins Px7 S2 headphones review unpacks all the little details, pros, and cons of this wireless headset so stick around to find out what our verdict is.

Bowers & Wilkins is a premium brand and these headphones sport the look we’ve come to expect from them. There’s a sophisticated blend of fabric, aluminum, and leather that give the Px7 S2 an elegant appearance. The oval-shaped ear cups are large and very well cushioned with ultra-soft memory foam.

The headset is extremely comfortable and easy to wear for hours on end. The adjustable headband is also well cushioned with the underside wrapped in ultra-soft leather while the top is covered in fabric. The outside of each earcup prominently displays a large “Bowers & Wilkins” signature which may be a polarizing detail.

The Px7 S2 is sadly not collapsible or foldable but the earcups fold 180 degrees for slightly better portability. However, the headphones come with a nice shell-style hard case for traveling so that’s a plus.

B&W added plenty of control buttons onto the sides of the earcups. The left cup just has one, but the right one has three buttons plus a power switch. It’s refreshing to have a sliding switch to turn these on and off and not have to rely on a press-and-hold.

The headset will go into standby even if you forget to shut them. Under the slider are two volume buttons sandwiching a play/pause/track change button. While we like all the buttons, they’re not the most intuitive or easy to actually use.

The play/pause/track button is at least textured to help you differentiate it from the otherwise smooth volume buttons. The single button on the right ear cup is configurable and can activate your voice assistant or toggle through ANC listening modes.

The Px7 S2 doesn’t have a 3.5mm headphone port, but it does come with a USB-C headphone cable so you can wire it into any audio source. Unfortunately, the wired connection still requires the headphones to be powered on.

The PX7 S2 charges with USB-C and there’s a double-sided USB-C cable included. The battery is nice and long at an impressive 30 hours. It only takes 15 minutes of charging to give you 7 hours of playback. The 15-minute standby feature ensures that the battery simply doesn’t drain out as well.

B&W has fitted six microphones into the headphones to ensure active noise canceling so in theory the phone call quality should be excellent. We found the microphone to be just alright for phone calls.

It picks up our voice clear enough with minimal background noise, but the volume is low and we noticed that there’s voice distortion as well. The microphone is quite handy during phone calls, but they’re underwhelming for headphones of this quality and price.

How do the Bowers & Wilkins Px7 S2 headphones stack up against Sony?

The active noise canceling (ANC) for the Px7 S2 is quite good. There are occasional hiccups for sudden loud noises, but it’s otherwise quite powerful and very clean. We didn’t detect any hiss or anti-noise sound as well.

The ANC cuts out a ton of commuting noise and nearly eliminates office noises. It’s almost on the level of Sony’s leading headphones. The only catch we noticed with ANC is if you’re wearing glasses it lets in a noticeable amount of noise. It’s still better than listening without ANC though.

The audio quality is overall excellent and noticeably premium. The large 40mm drivers and the fact that B&W doesn’t mess around when it comes to sound are proof enough. The mid and high-frequency sounds are quite clear and clean.

Voices shine and you can hear the subtleties of music and instruments beautifully. The bass is good but it is on the thinner side. You can crank up the bass in the app but it’s still light on the body. This didn’t bother us much but if you love bass you’ll miss the usual oomph that companies a deep bass sound.

The only thing that really bothered us about the audio is that the app doesn’t offer a customizable equalizer for fine-tuning the sound profile. Instead, they offer a treble and bass slider which is better than nothing but lacks the precision we’re used to from other headphones in this class.

The wear sensor is frustrating

The most frustrating feature of the Bowers & Wilkins Px7 S2 is the wear sensor that auto-plays and pauses music when you put the headphones on or take them off. Although this is usually our favorite feature, this time around, it’s so buggy we’re not sure why B&W included it.

Our music frequently auto-pauses while we’re listening. It mostly happens while we’re walking, and glasses make it worse. The app lets you adjust the sensitivity between low, medium, and high — a feature we’ve never seen before. This feature likely exists to address the ineffectiveness, but none of the three settings tend to help so we end up just switching off the feature.

The other annoying feature is that the app opens whenever the headphones are turned on. There’s no obvious way to disable this other than maybe deleting the app.

Are the Bowers & Wilkins Px7 S2 headphones worth it?

We have overall mixed feelings about the Bowers & Wilkins Px7 S2 headphones. They look, feel, and sound premium. They’re extremely comfortable and have long battery life. The active noise cancellation is almost as good as the competition.

On the other hand, we don’t love the fact that the headset doesn’t fold. The microphone quality is average, they need to be powered to be used in wired mode, and the control buttons are confusing to use while you’re listening. We are disappointed with how buggy the wear sensor is, that there’s no custom equalizer, and how much ANC is affected when wearing glasses.

Thankfully a lot of our issues can be solved in future software updates. We wouldn’t be as critical if the price point wasn’t as high as it is. The Px7 S2 is priced at $399 which is basically the same as Sony’s flagship ANC headphones, the WH-1000XM5.

Having just reviewed the Sony WH-1000XM5, we think the things Bowers & Wilkin’s Px7 does better than theirs are its looks and its comfort. Bowers & Wilkins Px7 S2 Headphones
$399.00
Buy Now
If you buy something from a GEEKSPIN link, we may earn a commission