BlackBerry’s been making Android phones for several years now, but it wasn’t until it was acquired by TCL that things really started heating up. In many ways, last year’s KEYone was the company’s return to form — a BlackBerry handset running Android rather than an Android phone made by Blackberry (hello, Priv). The KEYone was well received by critics and BlackBerry fans alike, even if it wasn’t a bestseller. With the KEY2, BlackBerry further refines the formula thanks to a bevvy of improvements designed to attract a wider audience.

So, like every sequel, the KEY2’s got big shoes to fill. Does BlackBerry’s latest handset live up to the challenge? How is it better than its predecessor? Who is the KEY2 for? Does a hardware keyboard make sense in 2018? Read on. 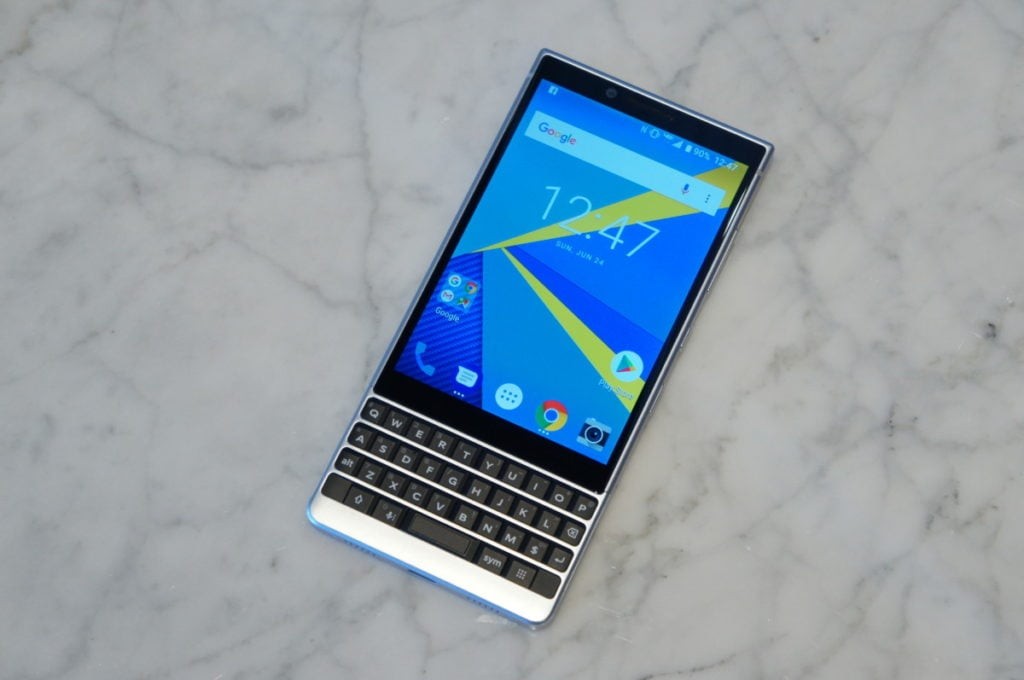 I know it’s cliché to call the KEY2 “sexy”, but it’s a very handsome phone. While the overall design is similar to the KEYone, it’s much sleeker – or less frumpy looking – thanks to cleaner lines and better materials. The 8MP front camera, earpiece, and sensors are now hidden behind glass above the 4.5-inch 3:2 display, and the hardware keyboard is better integrated into the series 7 aluminum frame. Around back, BlackBerry uses the same grippy material as last year, but the camera bump is less pronounced, despite housing twin 12-megapixel shooters.

The KEY2 is slightly taller than the KEYone, but also thinner, making it even easier to grip. All the buttons are found on the right this time around, with the textured aluminum power/lock key fitted between the aluminum volume rocker and Convenience Key – a much better location than before. This leaves the SIM tray on the left side, the headphone jack and secondary mic on top, and the mono speaker, primary mic, and USB Type-C power/data connector on the bottom edge. Build quality is exactly what you’d expect from BlackBerry – bulletproof. 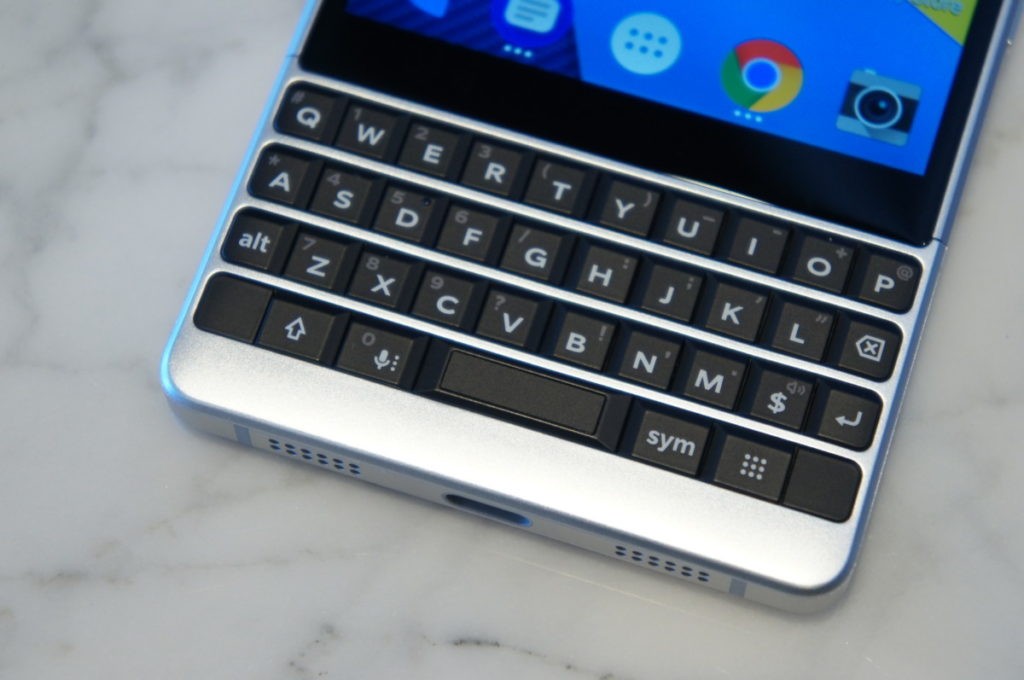 Let’s start with the obvious. The KEY2’s hardware keyboard is excellent. It’s 20% larger than the KEYone’s, and provides even better tactile feedback. Instead of glossy keys and silver frets, it features matte keys and body-colored frets. The fingerprint-sensing spacebar remains but there’s a new Speed Key that replaces the right shift key to access shortcuts within any app. Between short and long presses, that’s a whopping 52 (!) shortcuts available. For example, I set the “F” key to launch Facebook with a click, and FB Messenger with a long press – nifty.

What’s less cool is that it’s still impossible to read the “alt” characters stenciled on the keys if your eyesight isn’t tops. So you end up guessing at first and eventually memorizing that “alt-V” is the question mark — it’s really frustrating. Sure, the “sym” key brings up a software keyboard, but that’s missing the point. The hardware keyboard also supports a number of gestures while typing – swipe up to autocomplete, swipe back to delete the last word, double tap anywhere to enable text selection mode. Swiping also scrolls in most apps, extending the touchscreen gestures. 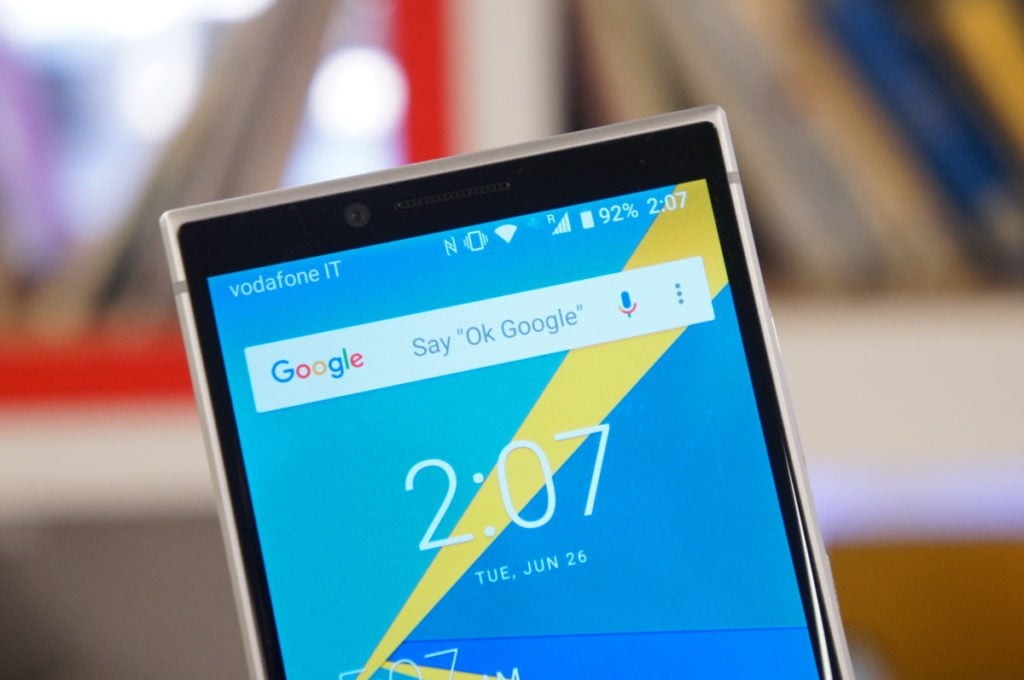 The KEY2’s display just doesn’t live up to the rest of the phone. It’s the same 4.5-inch 3:2 1080p IPS panel found on the KEYone – it gets the job done, but it’s nothing to write home about, especially at this price point. Viewing angles are adequate and colors are fine, but brightness is limited in direct sunlight. It’s also too small, and bezeltastic – there’s far too much-wasted space around the edges. Considering TCL makes its own screens, I’d like to see a modern 4.7 or 4.8-inch display with minimal bezels, at least on the sides.

On a related note, the capacitive navigation keys are no longer stenciled below the screen, and only become visible when the backlight is on. Why not remove these and use a larger display with on-screen navigation buttons? 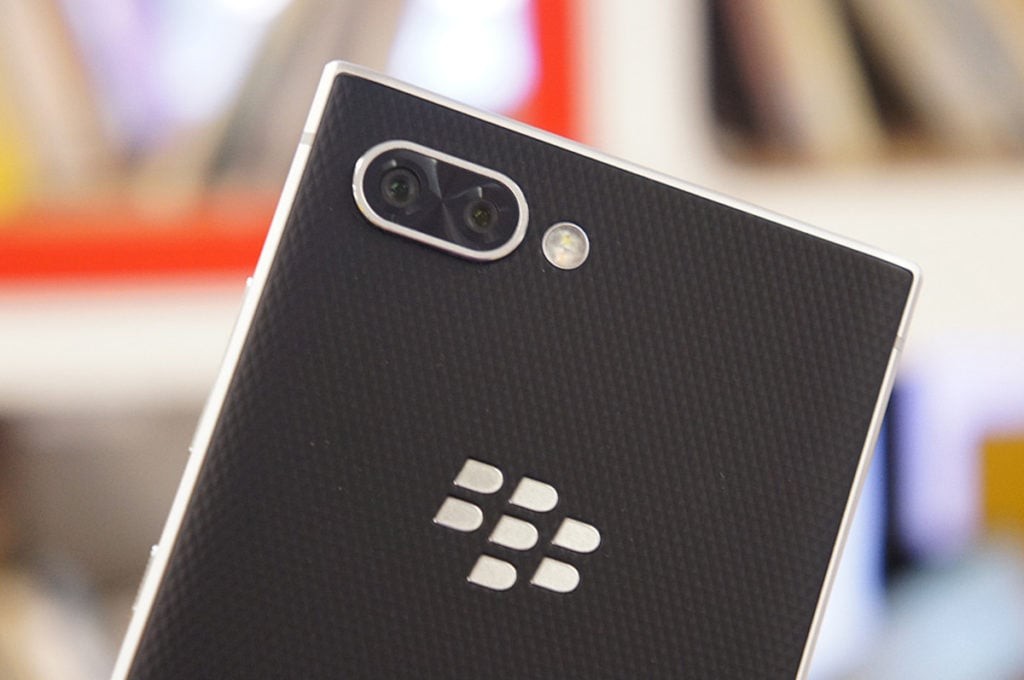 Dual cameras are everywhere, and the KEY2 is no exception. In the back is a pair of 12MP shooters, a regular f/1.8 lens with dual-pixel autofocus and 1.28-micron pixels, and an f/2.6 telephoto (2x) zoom lens with 1-micron pixels. Both sensors lack OIS, but feature phase-detection AF, and record video in 4k at up to 30fps. That’s definitely an improvement over the single 12-megapixel f/2.0 camera from the KEYone. As for the front-facing shooter, it marries last year’s 1.12-micron 8MP sensor with an f/2.0 lens, and tops out at 1080p 30fps.

The KEY2 snaps pretty good images considering the mid-range camera specs. Just don’t compare it with one of today’s flagships, or you’ll be disappointed. Low-light photos are hit-and-miss despite the fast lens and large pixels on the main sensor, and HDR pictures are often over-processed, which is odd. The KEY2 captures somewhat decent telephoto shots during the day, but you’re probably better off using the regular shooter and cropping at night. On the video front, I have no major complaints, other than the poor digital video stabilization.

In addition to the usual shooting modes, which include a relatively nice portrait implementation, there’s a handy document scanner, and something called private photos. This lets you take secure pictures by tapping the fingerprint reader instead of the shutter button in the camera app. 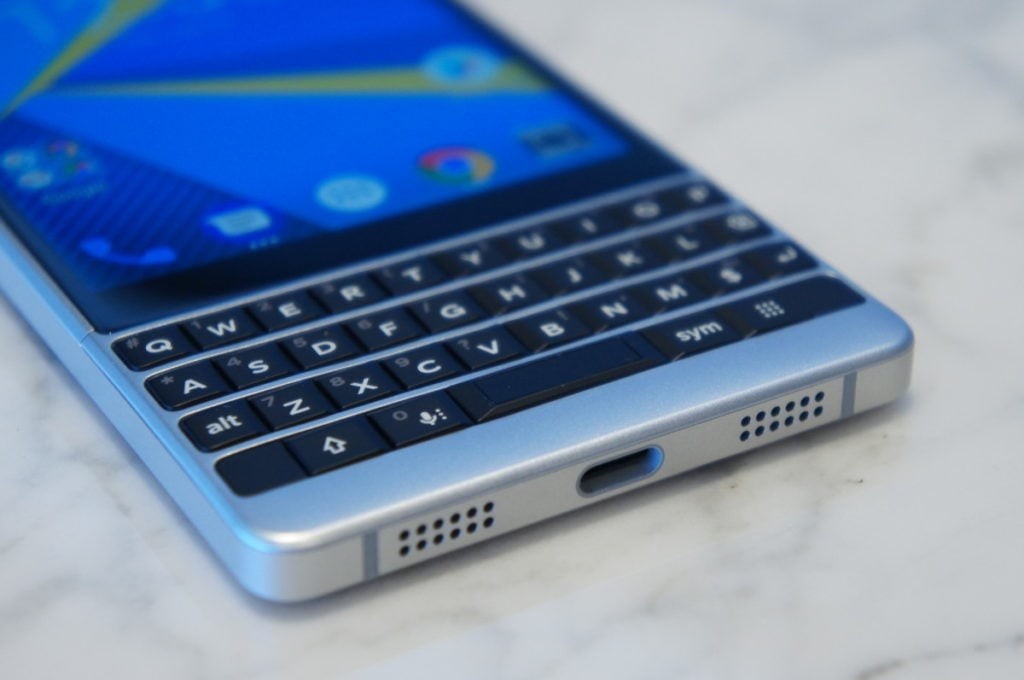 I spent most of my time testing the KEY2 on T-Mobile in San Francisco and didn’t have any issues with network performance, calls, or data transfers. As you’d expect from a BlackBerry, the mono speaker is loud and clear – perfect for those impromptu conference calls or random YouTube binges (you decide). I’m also pleased with the sound quality when listening through the headphone jack — it delivers clean, accurate, and expansive audio. But, like many other handsets, the KEY2 is volume-limited when using high-performance headphones or earbuds.

The KEY2 is powered by Qualcomm’s new-ish Snapdragon 660 SoC, which, together with 6GB of RAM and up to 128GB of built-in storage (expandable via microSD), is a worthy upgrade from the KEYone (Snapdragon 625, 4GB / 64GB max). Performance has been solid so far – unlike the KEYone, which slowed down significantly over time. I didn’t experience any hiccups with day-to-day tasks, despite BlackBerry’s many software customizations, and while gaming isn’t as snappy as the current crop of flagships, it’s totally respectable.

As for endurance, the KEY2’s a champ. It combines a highly efficient chipset with the same capacity battery as its predecessor (3500mAh), easily lasting a full day on a charge. The phone also supports Quick Charge 3 for faster refills. 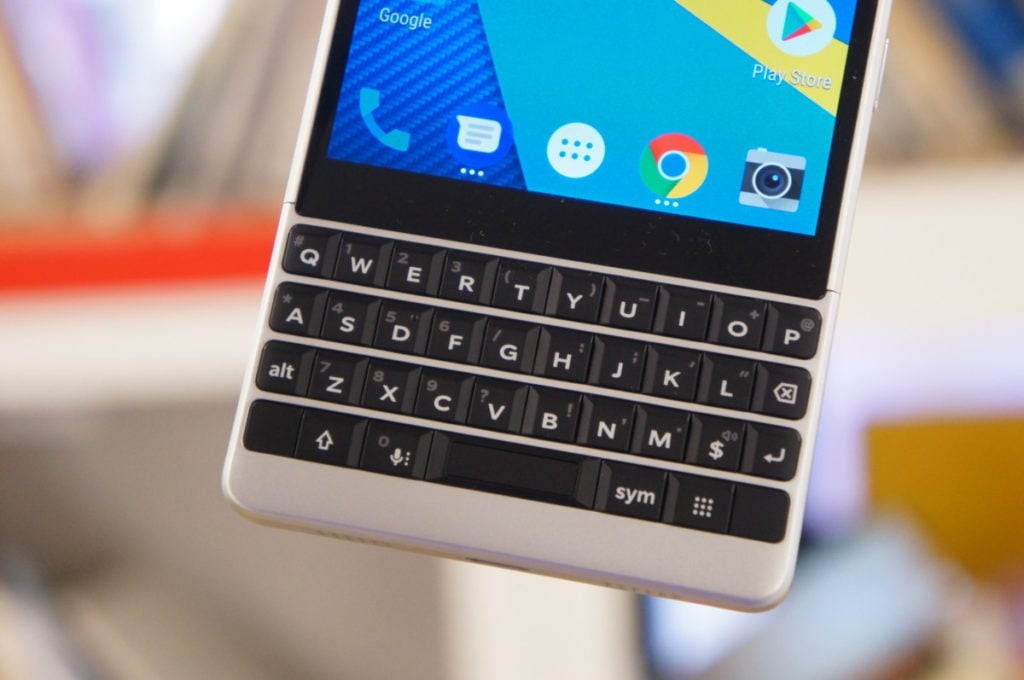 BlackBerry bundles a fair amount of software with its handsets, and the KEY2 is no exception. It runs Android Oreo (8.1) but is expected to receive to Android P “at a later date”. My KEYone is still waiting for its Oreo update, so take that with a grain of salt. At least the security patches are timely. The phone looks and feels pretty stock overall, which is very welcome, and BlackBerry fans will definitely find the customizations useful when it comes to security and productivity. Personally, I’d be happier without them — trick launcher and keyboard notwithstanding.

So what’s included? First, there’s Battery Center, which helps you stretch that battery life even further by managing app usage. Then there’s DTEK Security, which monitors app behavior and notifies you when your privacy is at risk. Private Locker is a fingerprint-secured file vault for sensitive content that also includes the Firefox Focus Browser for anonymous web surfing. Redactor and Privacy shade let you cover parts of the screen from wandering eyes and take screenshots with parts of the display blanked out.

Finally, BlackBerry Hub is a unified inbox that consolidates all your calls, messages, emails, and social media posts in one place. 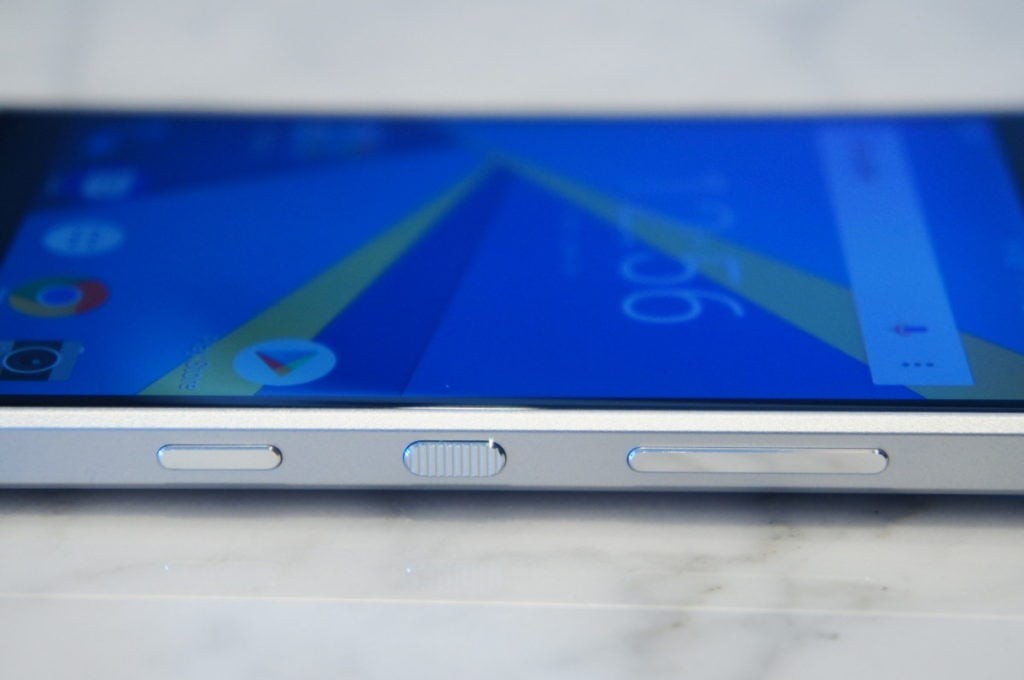 The BlackBerry KEY2 is the best BlackBerry ever made. But what I’d really like to see from BlackBerry is a no-compromise phone with the same nice materials and build, but with a larger, small-bezel display (and even a notch?), no capacitive navigation keys, OIS on both cameras, and a Snapdragon 845. Are you listening, TCL?

That said, there are two ways to look at the BlackBerry KEY2. On one hand, it’s a reasonably good phone with a unique form factor and a lovely design. At the same time, it’s definitely the best Android handset with a hardware keyboard. So, if that’s the killer feature you’ve been itching for, then I highly recommend the KEY2.

Otherwise, $650 is pricey for a device with a camera and display that are just average — I mean, that’s flagship money. Consider spending $530 on the excellent OnePlus 6 instead. In other words, don’t buy the KEY2 just to be different.