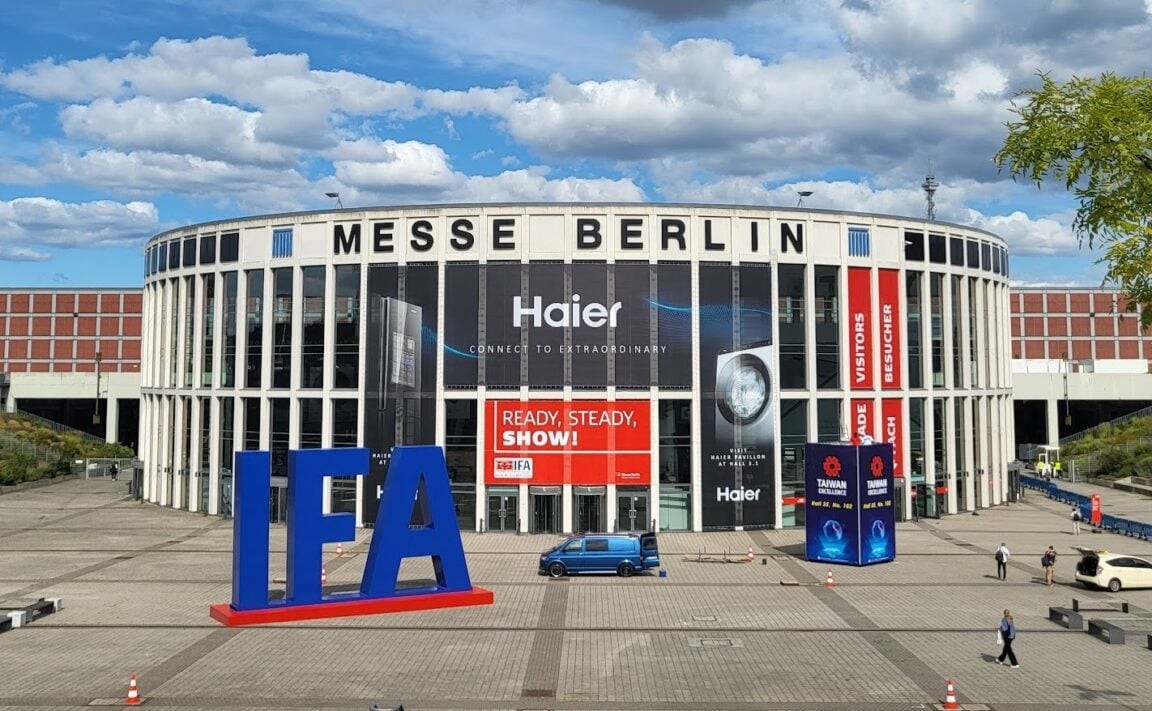 After almost coming back last year but then getting canceled due to Covid, the annual IFA electronics trade show in Berlin is finally back! Each year at IFA, tech brands launch new products, and this year many were looking to make a splash to celebrate the comeback. We scoured the show floor to find the best tech of IFA 2022 – here they are.

We found out a while ago that curved TVs are, let’s say limited in their usefulness – unless just one person is watching it, and they are sitting in exactly the right spot the whole time, it doesn’t make for a great experience. So, abandon ship? Nah, just make a transformer! The LG OLED Flex is a TV with a flexible display with an adjustable level of curvature. You can make it flat when you’re inviting folks over for movie night, then make it curved when it’s time to settle in for an immersive gaming session. There are 20 levels of curvature possible, so you can adjust it to get it just right for whatever you’re doing.

And, here’s another cool bit of customization – you can adjust picture size, using the whole screen for more cinematic experiences, and a smaller section of it when you’re playing something like a strategy game where it helps to be able to see everything at a glance. That’s all built on a 42-inch OLED display, so picture quality, color fidelity, and contrast are all going to be top-notch, especially considering it’s an LG panel. Lots to love, but no price or release date yet.

Collecting data has always been the easy part. Making that data useful and building on it? That’s what Withings has been working on for a long time now, and their latest effort digs into health data more than ever.

The Body Comp scale uses algorithms designed alongside health professionals to measure full body composition, including visceral fat, the fat that is found around organs, in addition to cardiovascular and nerve health. By digging a little deeper, Withings can more accurately identify risk factors for heart disease and diabetes, and can also make more specific health and lifestyle recommendations accordingly through its subscription-based Health+ service. Body Comp will be available on October 4th for $210 at Withings.com, and will include a 12-month subscription to Health+. 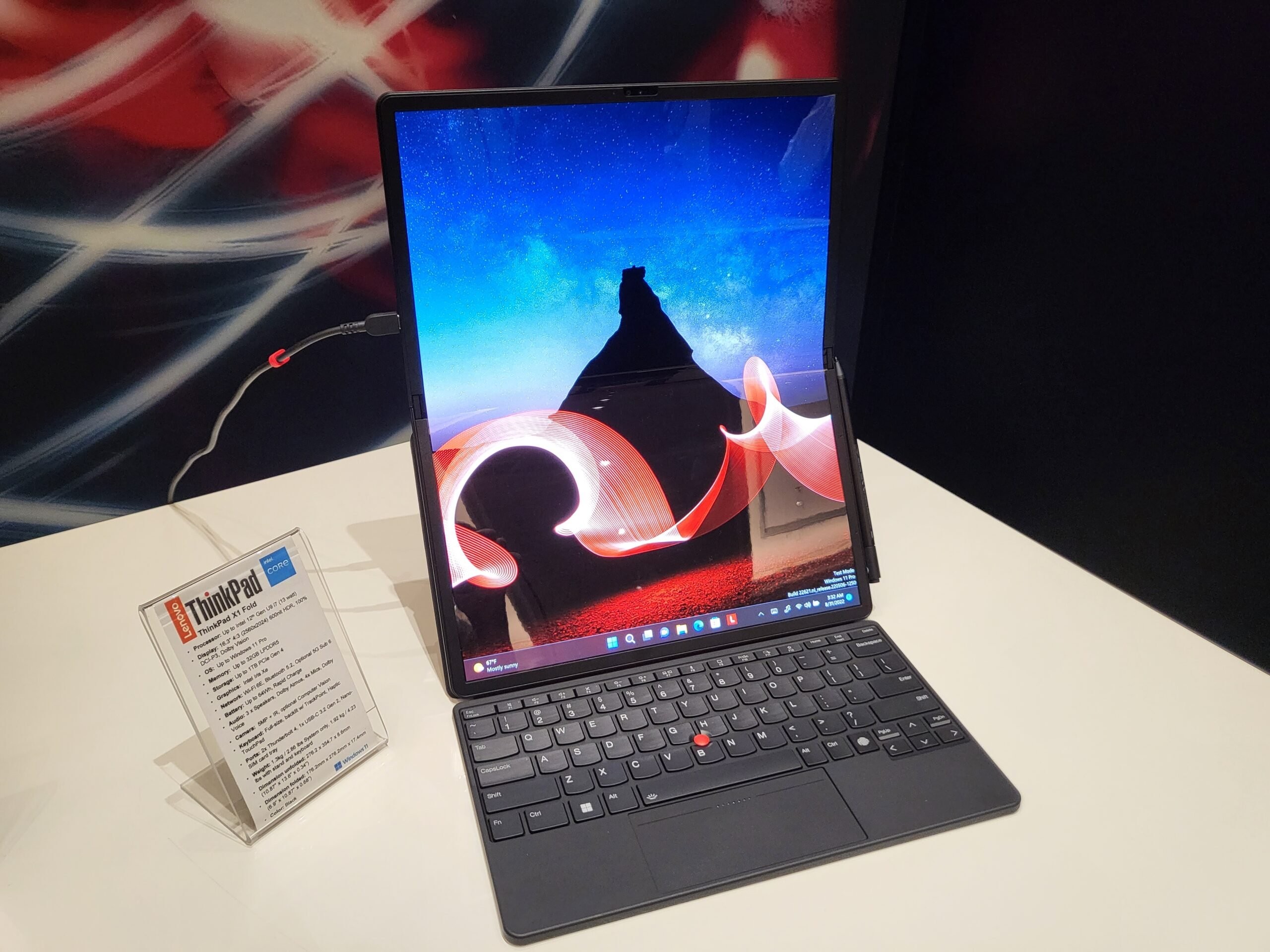 Lenovo is thinking bigger for the second version of its foldable ThinkPad X1 Fold. Like the first-gen X1 Fold, the concept is the same — a tablet that can be folded in half and used as a laptop with a touch keyboard, plus a detachable ThinkPad keyboard that allows it to be used as a full-sized laptop.

However, it was awfully expensive for such a small device at 13 inches last time, which is why we’re so glad that we’re getting a 16-inch foldable display this time. It’s also much thinner, making it a very versatile portable machine. But, this is still cutting-edge tech, so it’s going to come at a premium, starting at $2,500 when it becomes available in November.

The Honor 70 is the latest smartphone built to launch vlogging careers, and you know what that means: fancy cameras and processing! The 5G-capable phone has a dual rear camera array combining a 54 MP IMX800 sensor with a large 1/1.49-inch IMX800 sensor and a 50 MP ultra-wide macro lens, but the real prize is the video processing feature set.

The phone specializes in focusing the attention on a single person — Solo Cut mode will keep the focus on a specific person, even if they’re within a group. The phone will recognize that person and keep the focus on them as they move around. It’ll also be possible to record to versions of a video at once — one that keeps focus on the individual, and one that features the entire group of people as a whole. Should be interesting to see how folks make use of it! It’s coming out in parts of Europe as of IFA.

One for the kids! If getting the kids to wear (and enjoy) a fitness tracker has been a challenge, giving it a little Marvel flair should help! Parents can track their kids’ sleep, activity, and chores, while doing all that stuff becomes a little more fun for kids, as completing daily challenges unlocks Marvel and Black Panther rewards.

Some of the best smart home tech finds ways to work with what you’ve got. Amazon is introducing the Ring Intercom as a go-between, connecting existing apartment complex intercom/buzzer systems with your phone.

Using the app on your phone, you’d be able to talk to people buzzing at the front of the apartment complex, let them in, or designate trusted users to have access. It won’t come to the U.S. until next year, and it when it does, you’ll probably have to deal with one more go-between — making sure using it is OK with your landlord, especially where the trusted user feature is concerned.

The best TV up above would make for a fine gaming monitor in its own right, but if you want something as specialized as possible, well, it’s the LG UltraGear OLED gaming monitor. It’s the one to get when you assume that it’s going to be used by a single person sitting directly in front of it — a curved (up to 800R curvature) 45-inch 1440p OLED display with a 21:9 aspect ratio. As expected, we’re also looking at a phenomenal 240Hz refresh rate (with support for variable refresh rate), HDR10, HDMI 2.1 support, and picture-in-picture for streamers and multitaskers.

Nokia unveiled a couple mid-range smartphones at the show, but what caught our attention the most was their circular smartphone subscription service. Take note, because you might start seeing similar concepts pop up in a lot more places than just tech. When buying a phone through this service, Nokia will provide credits to donate to environmental causes the longer you keep your phone, hoping to extend the phone’s lifespan.

More interesting is that you’ll be able to send your phone back once you’re done with it, so it can be recycled or refurbished. The use of recycled materials is going to increase in virtually every sector, and that means there’s going to be a mad scramble by all kinds of companies to secure a stable pipeline of recycled materials to keep their carbon footprint low and their production high. Expect lots more similar programs in the near future.

We’re not getting geeked up over a smartphone charger for the best of IFA 2022! Instead, the EcoFlow Delta 2 is a heavy-duty battery with a base capacity of 1024Wh and an output of 1800W. It’s ideal as a camping companion but probably has a place at home too, for emergencies.

It can be fully charged by conventional means in just 80 minutes, but it can also be charged with solar power, which should get it to full in three to six hours. It can power most appliances, so in addition to being your best friend during outdoor adventures, you could also keep it juiced with solar power at home and use it as a primary energy source to reduce your electricity bill.

If you’re going to splurge on a gaming rig, you can’t skimp on the lighting. And, for a little extra mood lighting, Philips Hue smart lights have always been right on. They’re now making Philips Hue Play gradient lightstrips specifically for monitors, coming in bundles made for 24-inch to 27-inch monitors and 32-inch to 34-inch monitors.

As expected, it’ll work with and sync with the rest of the Philips Hue family of lighting products, so it can be controlled from the central app. Synced up gaming mood lighting for everything — an essential gaming accessory, indeed.

There are a lot of expectations when you see an audio product from JBL, so if they’re going to do true wireless earbuds, you know they’re going to bring something special to the table. The audio quality on the JBL Tour Pro 2 is a given, and JBL has included their usual suite of EQ features, so you can adjust audio to your tastes, but the real innovation is finally making use of the charging case!

Instead of being a box you have to carry around with you, JBL threw some basic control features on there, allowing you to see notifications, control music, turn active noise cancellation on and off, and accept or reject calls. If you have to have it on you anyway, might as well make it more useful!

Foldable scooters can be non-electric, too! Perfect for folks who use public transportation to commute, but still have a trek from the station to the destination, the Riley RS3 zips around using a 350W motor, with a tough frame made from aircraft-grade aluminum to make sure it can stand up to the daily commute. But, it’s just small enough to be folded down to a cubic volume of 0.084m3. Granted, that may or may not be small enough for public transport depending on how crowded the buses and trains are where you live, but it’s pretty impressive for an electric scooter!