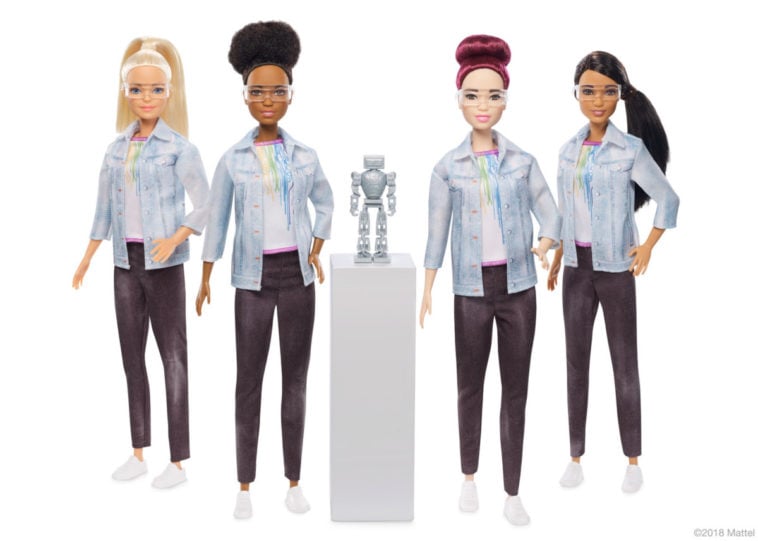 Robotics Engineer Barbie - a doll designed to pique girls interest in STEM and shine a light on an underrepresented career field for women. (PRNewsfoto/Mattel, Inc.)
ADVERTISEMENT

Barbie has had so many careers, that if she was an actual person, her LinkedIn page would read like a short novel. According to Glamour, the Mattel doll has had over 200 careers.

However, her latest could be her most important yet, as the release of this doll is actually helping youngsters take the necessary steps to follow that career themselves.

The doll in question is Robotics Engineer Barbie. It was launched this week and according to the company, it was designed to help girls garner an interest in a career which they may not be familiar with.

The doll comes with a robot that can be completely reconfigured and a laptop accessory. That’s not the most impressive thing about this story though – that’s reserved for the fact that Barbie has joined forces with Tynker—the gaming platform that helps kids learn to code.

According to Glamour’s report on the doll, this is to help young girls understand the careers available to them as robotics engineers.

Mattel and Barbie are also teaming with Black Girls Code and coder Casey Fiesler, Ph.D to release Code Camp for Barbie and Friends, an e-book on the subject.

This Barbie will come in four ethnicities—African-American, Asian, Caucasian and Latina.

Lisa McKnight, Barbie’s general manager and senior vice president, told Glamour that this is so “as many girls as possible see themselves [in this doll].”

McKnight also said that they tried to keep the fashion of this doll in line with the occupation, so they have her hair tied-up and she is wearing casual shoes.

She even added that the Barbie team worked alongside a female professor at Massachusetts Institute of Technology (MIT) to ensure the doll’s presentation was as close to authentic as possible.

Robotics Engineering Barbie is just one of the latest inspiring role model Barbie dolls that Mattel has released this year. Just a few months ago – for International Women’s Day, Mattel released a slew of iconic Barbie dolls – including Frida Kahlo, Amelia Earhart, and Katherine Johnson.