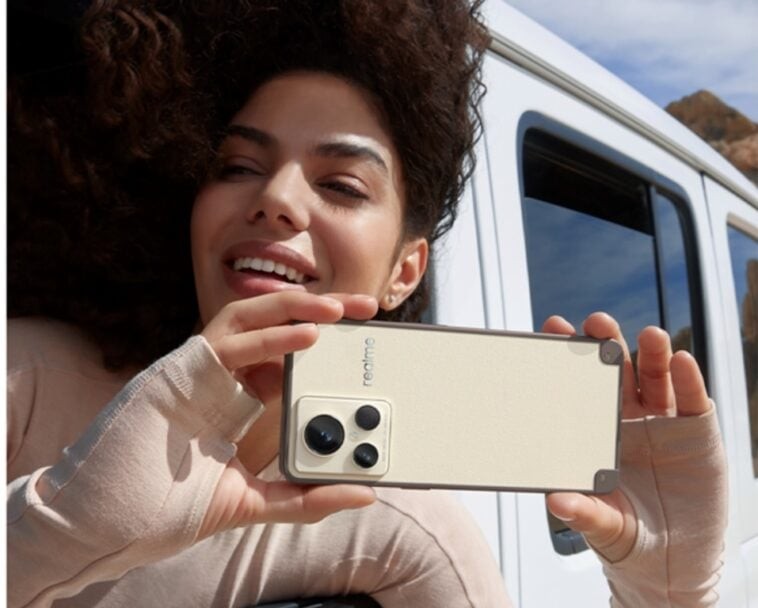 To give it an ‘urban outdoor lifestyle’ feel, the Wildnerness variant has a travel-trunk-like design with a vegan leather back encased in metallic rivets, with the four edges of the smartphone coated in a premium matte finish. Needless to say, Realme’s GT 2 Explorer is nothing like any other phone on the market.

Described as a “fashion-forward” smartphone by realme, the GT 2 Explorer Master Edition is available in the color variants; Wilderness, Snowfield, and Black Beach, where Wilderness is the result of a collaboration with former Ralph Lauren fashion designer Jae Jung.

In terms of hardware, the device is equipped with the latest and best that flagship phones can offer.  The GT 2 Explorer Master Edition is powered by the Snapdragon 8+ Gen 1 SoC equipped with a 4nm TSMC process allowing the chipset to provide a 10% boost in CPU performance and a 30% decrease in CPU/GPU energy consumption over its predecessor, the Snapdragon 8 Gen 1.

To make the performance twice as good, the X7 Display chipset combines high frame rate and HD picture quality while also maintaining low latency and power consumption. Realme claims that the chipset can support a frame rate interpolation of up to 4 times such that a 30 fps picture can effectively be made into a 120 fps one.

The Realme GT 2 Explorer Master Edition is also a part of the DDR5 memory bandwagon with LPDDR5X RAM and UFS 3.1 support. Aside from offering the snappiest user experience to date, these features are also expected to reduce power consumption by up to 30% when gaming and up to 25% while watching online videos.

Speaking of gaming, realme has introduced what is called the HyperTouch Visual Triggers feature that has “tactical feedback and notification light effects” on the side of the Master Edition phone.

Lastly, the Realme GT 2 Explorer Master Edition has a GaN Fet charging solution, an efficient feature that significantly reduces heat by 85%. The smartphone’s 5,000 mAh battery supports 100W UltraDart Charge, which reportedly has the capability to charge from 0 to 100% in just 25 minutes.