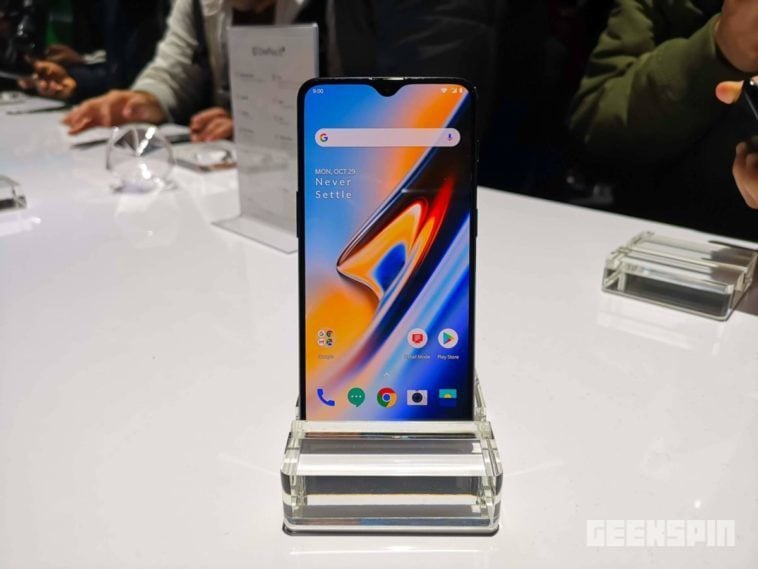 The OnePlus 6T is here and pretty much all of the leaks have been spot on. The OnePlus 6T packs in a 6.41” display with an in-screen fingerprint reader. OnePlus is calling this feature “screen unlock” and it can unlock your phone in just 0.34s. While the Huawei Mate 20 Pro does offer a similar feature, OnePlus is actually the first manufacturer to offer this feature on a handset in the U.S. OnePlus says that their new screen unlock feature is as secure as the fingerprint sensor on the 6.

When it comes to the device’s display, the nearly-nochless display is a “top-grade” AMOLED display. The 6.41-inch AMOLED display on the OnePlus 6T offers a 19.5:9 aspect ratio with a 2340×1080 resolution, 402 ppi and it’s very bright at 600 nits. They’ve also reduced the size of the chin. This makes the phone feel overall more compact than its predecessor and even easier to grip in your hand.

The actual camera hardware for or the 6T is similar to the 6. To that effect, it comes with a dual 16M+20M (f1.7) camera with OIS and EIS, and support for 480fps slow-motion video. That said, OnePlus has listened to user’s feedback and has improved lowlight photography for the camera with their new Nightscape mode that enhances the quality of low light photos. Their Nightscape mode is also quite fast – it takes just 2 seconds to capture a photo. Nightscape will also be coming to the OnePlus 6 via an update. In addition to improved lowlight photography, portrait photography has been improved too, and they’ve added studio lighting for portrait photos.

When it comes to performance, the phone comes running on Qualcomm’s speedy 845 Snapdragon processor. The company says that they are also utilizing RAM for storage performance which helps decrease the load time for games. There have also been 500+ optimizations made for Oyxgen 9.0. Overall, OnePlus promises an even faster and smoother experience with the 6T.

On the battery front, the battery has been upgraded to a 3,700 mAh battery and the phone also comes with OnePlus Fast Charge.

OnePlus says that in addition to the Gigabit LTE support that the phone has, they’ve improved support for carriers and that the phone now supports over 233 carriers in 74 countries.

But perhaps the most exciting aspect of the OnePlus 6T launch is the fact that T-Mobile will be carrying it. This is the first time that OnePlus has been picked up by a U.S. carrier. This means that OnePlus has managed to succeed where a much larger Chinese company like Huawei has failed.

T-Mobile will be selling the 8GB RAM / 128GB OnePlus for $549. This handset is optimized for T-Mobile and the 600MHz band. Unfortunately, the model that T-Mobile is selling only has support for a single sim, it’s also a separate sku that comes preloaded with custom firmware with T-Mobile apps. That includes the T-Mobile app which can’t be uninstalled. With all of that said, there is an advantage to buying the phone for T-Mobile if you’re a T-mobile customer – and that is that the phone will be optimized to take advantage of T-Mobile’s 600MHz band.

The OnePlus 6T will be available from T-Mobile as of November 1st for $579 for the 8GB RAM / 128GB model. T-Mobile is offering a $300 credit if you trade in your phone for a OnePlus 6T. This trade-in offer is limited to certain smartphone models, and includes all of OnePlus’s previous handsets.

If you’re in New York City, you can pick one up as early as today at the T-Mobile signature store in Times Square. The first 100 people to buy a OnePlus 6T from the store will receive a special gift.

The OnePlus 6T will initially be available in two color choices: midnight black and mirror black. In addition to the T-Mobile model, there are three models to choose from that you can purchase directly from OnePlus unlocked: 6GB RAM / 128GB for $549, 8GB RAM / 128GB for $579 and 8GB RAM / 256GB RAM for $629.