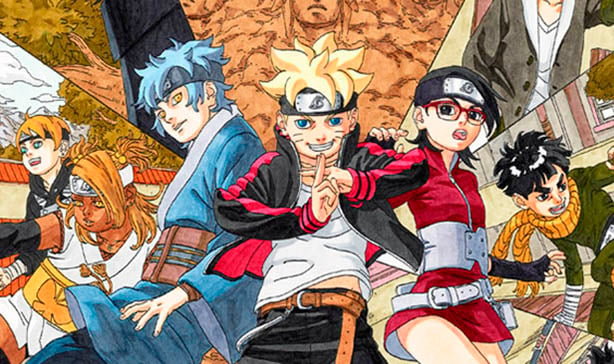 The most recent chapters of Boruto: Naruto Next Generations have been exploring the character of Kawaki and his growing closeness to Naruto and Boruto’s family. The last chapter ended with a cliffhanger as the surprise arrival of Jigen was introduced and his plot of taking Kawaki back to the Kara hideout. Naruto, naturally, will not let that happen and jumps straight into a battle with Jigen.

The next chapter that follows this cliffhanger has finally been released and it is focused on the battle between Naruto and Jigen. Despite activating his full Nine-Tailed Beast Chakra, Naruto finds Jigen incredibly powerful. He has the mastery of the mysterious Karma power and began unleashing its full potential on Naruto. With Kawaki ready and willing to give himself to Jigen to save the rest, Naruto refuses which prompts Jigen to whisk them off into a new dimension with the intent of leaving Naruto there. Thankfully, Sasuke comes to his aid and kicks Jigen right back into the dimension he created. The duo is reunited and Naruto is ecstatic. It is now a fight between them and Jigen. Jigen begins to show the extent of his powers. As Naruto unleashes one of his Rasengan attacks, Jigen is able to counter by seemingly able to absorb chakra. He proves to be a difficult foe as he is able to easily evade and counter Naruto’s actions. 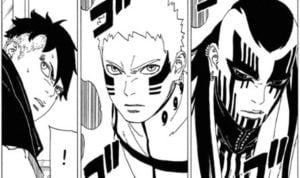 Apart from being able to absorb chakra, Jigen is able to demonstrate more of his powers. Apart from his obvious strength, he is also able to shrink and grow his size at will. He is also able to control strange rods that he, in conjunction with his size-changing powers, uses to pin Naruto down. It seems to be a hopeless battle as every attack Naruto and Sasuke make is easily countered by Jigen. Even a giant Rasengan is nothing to him as he is able to move even faster as he absorbs the chakra. The chapter ends with an obscure threat by Jigen and the duo looking surprised. This can only hint at Jigen’s seal transformation much like Kawaki’s in the previous chapter.

The next chapter of Boruto: Naruto Next Generations has no official release date at the time of this writing.