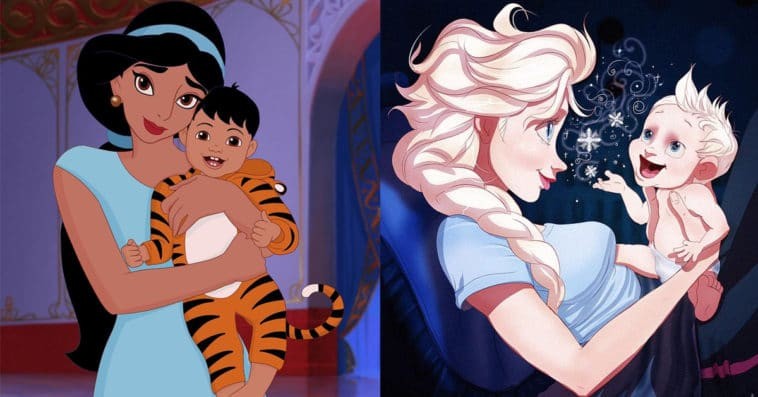 Many Disney princess movies end with the main character marrying her love interest. And since marriage usually leads to parenthood, a lot of fans can’t help but wonder what Disney princesses would look like if they were mothers. Though Ariel is the only official Disney princess so far to have had a child, talented artists like Oksana Paschenko, Isaiah Stephens, Calmingscene, yellb, and MissxAnonymous have already created several fan art pieces depicting Disney princesses as moms. Check out the slideshow below to see the journey of your favorite Disney princesses into motherhood, starting from pregnancy, delivery, and all the way to child-rearing.

A mom-to-be Aurora goes back to the forest with her husband Phillip for her maternity photoshoot. Wearing a Grecian maternity maxi dress with a slit on the side, Aurora holds Phillip’s right hand as he cradles her burgeoning baby belly.

Belle and Adam, aka the Beast, are expecting a child. And to get some fresh air, the lovers get out of their towering castle for a while and visit Belle’s cottage, where she used to live with her father Maurice and their horse Philippe.

A few months before they welcome their baby to the world, Cinderella and her Prince Charming go on a date by the river. With a cruise ship and modern infrastructures in the background, the couple still look very much in love with one another as they walk along the riverside holding hands.

Since Esmeralda is living in Paris with her husband Phoebus, it isn’t surprising to see them have her maternity shoot near the iconic Eiffel Tower. Glowing in her teal maternity dress with cape sleeves, Esmeralda smilingly holds her baby bump, as a dashingly-dressed Phoebus presses his ear against it. In the 2002 direct-to-video film The Hunchback of Notre Dame II, Esmeralda and Phoebus have a son named Zephyr.

A few months before her due date, Jasmine travels to the city of Petra with her husband Aladdin for a quick vacation. The couple visit the Al-Khazneh temple, where the above adorable moment is captured on camera.

Megara has her maternity shoot at a quaint park in the Russian city of Rostov-on-Don. Wearing an off-the-shoulder purple dress, the soon-to-be mom gracefully poses for the camera with her husband Hercules in casual attire.

With Li Shang’s assistance, an expectant Mulan reaches one of the highest peaks of the Great Wall of China. To celebrate their little win, the husband and wife pose for a photo that highlights Mulan’s baby bump.

Though Pocahontas didn’t end up as John Smith’s wife in her eponymous Disney movies, the two characters are reimagined as spouses with a baby on the way in this fan art. Standing in the middle of an African savanna, Pocahontas displays her huge baby belly as she gets a sweet kiss on the forehead from John.

Rapunzel gets pregnant with her husband Eugene months after tying the knot at the end of the 2011 short film Tangled Ever After. Now, the couple are in the middle of Rapunzel’s maternity shoot, in which they are posing for some pictures on a dock with the vast sea and snow-covered mountain ranges as their background.

#11 Pregnant Snow White with The Prince

Snow White is all glammed up for her maternity shoot at a lovely park in the Russian city of Rostov-on-Don. Dressed in a glittery yellow strapless gown, the fairest one of all flaunts her baby bump as The Prince stands behind her seemingly trying to make her more comfortable.

Stunning in her green chiffon maternity dress, Tiana, along with her husband Naveen, visits St. Louis Cathedral in New Orleans, Louisiana to pray for her upcoming delivery. After the mass, the prince and princess of Maldonia flash their biggest smiles as they pose for a photo in front of the oldest cathedral still in use in America.

Ariel is all smiles as she carries her little bundle of joy, Melody. Dressed in a Flounder-inspired onesie, Ariel’s daughter looks super cute with her chubby cheeks and aqua blue eyes.

Belle is gently rocking her baby girl to sleep in the quiet and spacious library of Beast’s castle. Though surrounded by several books that she would definitely love, Belle only has her eyes on her precious little one.

#15 Cinderella and Prince Charming with their baby

Cinderella, Prince Charming, and their baby are one happy family in this fan art set at a lovely park by the river. Cinderella is carrying their child with her both hands while enjoying the picturesque view. Prince Charming, on the other hand, is pushing their kid’s stroller while staring at their offspring dotingly.

#16 Jasmine with her baby

Holding onto her little boy with both arms, Jasmine looks like an overprotective mom in this fan art. Her kid, however, doesn’t seem to bother, as he appears to be enjoying her mother’s warm hug.

#17 Jasmine and Aladdin with their son

Dressed in matching shirts, shorts, and sneakers, Jasmine, Aladdin, and their son step out for some shopping. Though already a big boy, the couple’s son still loves to be carried around, something that the prince of Agrabah doesn’t see as a problem.

Mulan and her baby are spending some quality time together near the shrine dedicated to her family’s ancestors. Dressed in a Mushu-inspired hooded overall jumpsuit, Mulan’s little one is flashing his cutest smile as he sits on his mother’s sturdy shoulders.

As mentioned above, Russian illustrator Oksana Paschenko isn’t the only artist out there who has reimagined Disney princesses as moms. American artist Isaiah Stephens has also created a collection of drawings depicting Disney characters’ journey into parenthood. One of his works in that art series is this beautiful illustration of Jasmine and Aladdin under the night sky. While the princess of Agrabah looks a bit tired, Aladdin’s excitement about their upcoming child makes all her sacrifices worth it.

Mulan and Li Shang can’t wait for the arrival of their little bundle of joy. And though it’s Mulan who’s physically carrying their child, this fan art shows that Li Shang makes sure that his wife will never feel alone throughout her pregnancy.

#21 Ariel with her child

Ariel looks so done trying to feed her playful son. She, however, can’t simply quit, as the princess of Atlantica seems to know by now that being a mom is a life-long responsibility.

#22 Aurora in labor with Phillip

Aurora is sweating and tearing up at the same time as she delivers her baby in the hospital. Though Phillip will never know the extreme pain his wife is feeling at the very moment, his mere presence definitely makes Aurora’s childbirth a bit more bearable.

Belle looks like she’s really enjoying her new role as a mom. With an unfading smile on her face, the Disney princess is serenely breastfeeding her baby while sitting on a bench at a park.

A few months after giving birth, Elsa is still in awe that she’s able to carry life in her womb for nine months. Staring lovingly at her adorable child, the Snow Queen looks more complete than ever.

#25 Pocahontas with her baby

Taking care of an infant is probably one of the most tiring stages in raising a child, so it isn’t surprising to see Pocahontas fall asleep while looking after her newborn baby. Pocahontas may be one of the most energetic Disney princesses, but this fan art shows that she has just found her match.

#26 Rapunzel and Eugene with their baby

Rapunzel and Eugene’s baby has just pooped. And though it’s the latter’s turn to replace their child’s diaper, the princess of Corona willingly does the task once again, as her husband can’t really take the smell.

#27 Tiana and Naveen with their baby

Tiana can’t help but giggle in the corner when her son starts to pee the moment he’s picked up by his dad, Naveen. Though the prince of Maldonia is obviously unamused, it won’t take long before he realizes that experiences like this are all part of rearing a child.

Pregnant Aurora looks very anxious in this artwork by American artist yellb. While we can’t exactly tell what the princess is feeling, the way she holds and looks at her big baby belly suggests that she’s started to experience some contractions.

This artwork depicts a pregnant Ariel in her mermaid form. Wearing her iconic purple seashell bra top and green mermaid tail, the princess of Atlantica shows off her baby bump while swimming underwater.

Naked maternity shoots are still on-trend, so Rapunzel dares to do one. Covering her private parts with just strands of her long golden blonde hair, the princess of Corona sensually shows off her baby belly with the rest of her body curves.

Pregnant Moana is craving some chicken. And with no other chickens in sight aside from Hei Hei, the Motonui native grabs the rooster by the feet and thinks if it’s about time to turn the male chicken into her favorite dish.

Pregnant Belle is wide awake in the middle of the night as she seemingly starts to experience some contractions. Shocked by what she’s feeling inside her, the princess is yet to realize that she’s about to give birth anytime soon.